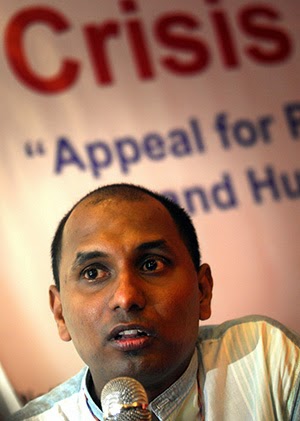 IFJ Asia
The International Federation of Journalists (IFJ) is relieved to report that the respected human rights activists Ruki Fernando and Father Praveen were released by Sri Lankan authorities at approximately 1.30am Sri Lankan time today. Ruki Fernando, one of Sri Lanka’s most prominent human rights activists and a close friend of the IFJ, was arrested alongside Fr. Praveen Mahesan, a Roman Catholic priest and the former director of the Jaffna-based Center for Peace and Reconciliation on March 16 in Kilinochchi by Sri Lanka’s Terrorist Investigation Division. They were charged with terrorism offenses.
(Photo: Sri Lankan national K.M Ruki Fernando before  his arrest, speaking to the media about the humanitarian situation in Sri Lanka © AFP PHOTO/JES AZNAR )
Yesterday, the IFJ joined an international protest over the arrests calling for  the immediate release of the two men and were joined by affiliate unions across the Asia Pacific and international human rights organisations such as Amnesty International, Forum Asia, Human Rights Watch, the International Crisis Group, and the International Commission of Jurists.

“I’m back home, was released few hours ago, thanks to all who worked so hard and to ensure my and Fr Praveen’s release. I’m convinced our safety and release was because of all the support and concerns expressed by so many in SL and across the world. Let’s try to help others who also need similar support.”

The IFJ said: “Ruki and Father Praveen are relentless advocates for free speech and human rights and we are glad to see these reprehensible charges have been dropped.”

“The IFJ thanks everyone who lent their voice to this international call for justice over the past two days – a call that should not end with the release of Fernando and Father Praveen.”

As the attention of the ongoing Human Rights Council (UNHRC) sessions in Geneva is drawn to Sri Lanka’s human rights record, these arbitrary detainments reconfirm the intensifying suppression of media and free speech each time the Government of Sri Lanka comes under scrutiny on human rights issues.

A proposed resolution to be presented to the UN Human Rights Council in Geneva this month calls for an international investigation into “past abuses and to examine more recent attacks on journalists, human rights defenders, and religious minorities”. The draft is sponsored by five countries – the US, UK, Mauritius, Montenegro and Macedonia.

Tamil activist Balendra Jeyakumari was detained and arrested last week under anti-terror laws after she continued in her campaign to locate her son who reportedly went missing during the final days of the Sri Lankan civil war in 2008. Jeyakumari’s story is one of many mothers of Tamil soldiers – two of her sons were killed during the Civil War and her third son went missing after surrendering himself to the Sri Lankan military. Jeyakumari remains in detainment and her 13 year old daughter who was also detained has reportedly been handed over to a probation officer.

“The IFJ will continue to work with our brave affiliates in Sri Lanka to fight for free speech and a strong independent press. We hope the events of the past few days sheds light on the dangerous conditions in Sri Lanka for those who attempt to speak up about human rights abuses,” the IFJ said.

“We hope world leaders keep this global call for justice firmly in mind when they debate the upcoming resolution on the human rights situation in Sri Lanka at the UNHCR in Geneva.”