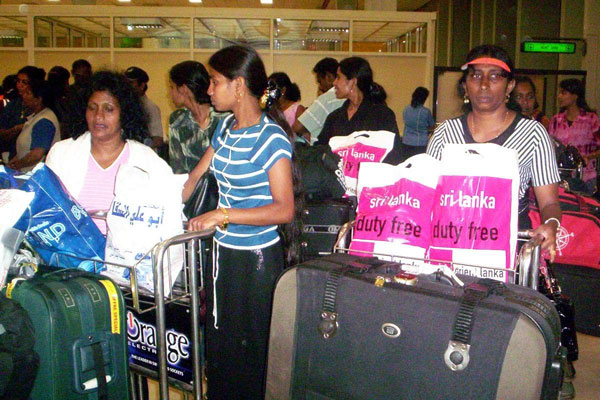 This week, the Sri Lankan government stopped planned air flights to bring Sri Lankan migrant workers back home from the Middle East. The decision was made after it was discovered that many were infected with the coronavirus.

On May 26, President Gotabhaya Rajapakse’s media division announced that a “new mechanism is to be formulated to repatriate Sri Lankans.” Information about the “new mechanism” has not yet been released.

On Wednesday, Army Commander Shavendra Silva, head of the National Operation Centre for the Prevention of COVID-19, told the media that 157 coronavirus cases had resulted from workers returning from abroad. “If more Sri Lankans were repatriated from Middle Eastern (ME) countries,” he said, “there’s the possibility of more infected patients.”

Between May 24 and 28, the number of confirmed infections in Sri Lanka spiked by 383, to a total of 1,524. The increase was a new record and saw the government allocate two additional hospitals—in Hambantota and Teldeniya—to deal with the growing number of cases. The surge was a result virus-infected migrant workers returning from Kuwait, Dubai and Qatar, along with increased cases among Sri Lankan sailors.

The migrant workers have correctly pointed out that they became infected because Colombo refused to organise their prompt repatriation. There are still more than 16,000 migrant workers stranded with lapsed visas in Kuwait alone.

On April 21, the Kuwaiti government granted a “general amnesty period” so these workers could leave the country. The Sri Lankan government, however, failed to immediately organise their return, even as the pandemic rapidly spread in Kuwait.

The Sri Lankan workers, many of whom are destitute and currently staying in unsafe and overcrowded accommodation, even staged a protest outside the Sri Lankan embassy in Kuwait. Several workers spoke out on a YouTube video calling on Colombo to get them back home.

R. Wickremanayake, a Sri Lankan printer in Sharjah, a city in the United Arab Emirates, told the WSWS that his salary was cut by 50 percent last month and then reduced by 40 percent in May. His previous 1,600 dirhams ($US435) monthly salary is now just 640 dirhams.

The government hospitals were full of patients and migrant workers were instructed to remain where they were even if they became ill, he said. The Sri Lankan government had done nothing more than advising the migrant workers to be careful and register their locations.

There are over one million Sri Lankan migrant workers in the Middle East, one component of the multi-million-strong South Asian workforce toiling in that region for low wages and in horrible working conditions.

The cash-strapped Sri Lankan government depends on up to $7 billion in annual remittances from these workers. Successive Colombo governments have hypocritically praised these workers as the “lifeblood of the country,” but the real attitude of Sri Lanka’s ruling elite was blurted out by Mahindananda Aluthgamage, a former minister and ruling Sri Lanka Podujana Peramuna leader. Appearing on the Derana talk show this week, he referred to the infected workers as “bombs.”

While Middle Eastern governments want to send back the migrant workers, Colombo is not interested. Discouraging expatriate workers from returning home, Ravinatha Ariyasinha, Sri Lanka’s foreign ministry secretary, said: “Our plea to these employees, as we did to students some time ago, is to ask them to carefully calibrate the possible loss of jobs or loss of educational opportunity or major delays which can occur with their return.”

The attitude of the Sri Lankan capitalist class towards these workers echoes observations made by Friedrich Engels about the British bourgeoisie in his 1845 book The Condition of the Working Class in England: “For it [the bourgeoisie] nothing exists in this world, except for the sake of money, itself not excluded. It knows no bliss save that of rapid gain, no pain save that of losing gold. In the presence of this avarice and lust of gain, it is not possible for a single human sentiment or opinion to remain untainted.”

On May 26, as it was rejecting the stranded Sri Lankan migrant workers’ appeals, Colombo continued its reckless reopening of the economy, ending the daytime lockdown for all districts, including the country’s most virus-affected commercial centres in Colombo and Gampaha.

Army Commander Silva, however, cynically declared: “We are winning the war against the deadly virus. What I expect from the public is to bear with us for another few weeks by strictly adhering to health and security advisories, paramount being physical distancing and hygiene.”

These health directives cannot be observed by workers, who have to travel on overcrowded buses or railways and endure workplaces where social distancing is impossible.

The Rajapakse government’s callous indifference towards the plight of the stranded migrants is the same as its attitude towards workers inside Sri Lanka. The government has not bothered to even issue an estimate on national job losses or the numbers of people with no income. There is no official information on whose wages and pensions have been slashed, and whose working hours have increased.

Like its counterparts around the world, the Sri Lankan government, with the support of a compliant media, is covertly practicing “herd immunity” policies that allow the virus to spread unhindered and infect the most vulnerable sections of society.

From the outset, the Rajapakse government downplayed the deadly disease when the first case was discovered in January and claimed that the problem was “under control.”

Colombo is disregarding World Health Organization (WHO) advice and attempting to paint a rosy picture of the situation, asserting that Sri Lanka is “open for business.”

WHO emergencies head Dr. Mike Ryan said on May 25 that COVID-19 cases were still “increasing in Central and South America, South Asia and Africa,” and that “infection rates could rise again more quickly if measures to halt the first wave were lifted too soon.”

According to figures released yesterday by the national health bureau, daily average tests conducted in Sri Lanka between February 18 and May 27 were just 883, one of the lowest rates in the world.