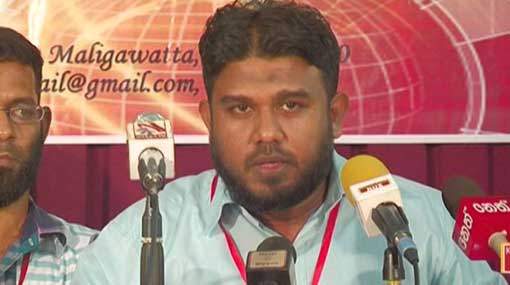 COLOMBO: The Sri Lankan government has moved to curb communal hate speech by arresting and getting remanded two extremists, one a Sinhalese and the other a Muslim, on charges of making communally incendiary speeches in the capital earlier in the month.

On November 3, Thawheed Jamath’s General Secretary Abdul Razik had publicly insulted Buddhism, and reprimanded the Bodu Bala Sena (BBS) General Secretary Galagoda Aththe Gnanasara Thera, in filthy language on social media. On November 7, Dan Priyasad, had said publically at a pocket meeting in front of the Fort Railway station,  that he will kill all Muslims, even using suicide bombers.

Meanwhile, the Tamils are demanding action against a Batticaloa-based Buddhist monk, Ven.Ampitiya Sumanarathana Himi, for publicly scolding in filthy words a Tamil Grama Sewaka for filing cases against Sinhalese.  The petty official stood in silence as the monk called him a “Tiger” and a “dog” and vowed to smash the “rule of the Tamils and Muslims over Sri Lanka”. A police officer who was on the spot silently watched the monk abuse the official. The video of the monk’s ranting went viral on the social media.

The government is yet to take cognizance of the monk’s behavior.

Meanwhile, Muslim  women have launched a signature campaign against the assault on two Muslim women by Islamic conservatives.

Juwairiya, founder of the Muslim Women’s Development Trust, Puttalam, and Nufitha, a victim of child marriage turned activist from Vallachenai, were threatened  for speaking in favor of  amending the iniquitous Muslim Marriage and Divorce Act (MMDA) of 1951 in a TV program. The two women had also made a representation to the human rights sub-committee of the Sri Lankan parliament on the need to amend the MMDA.

A statement by Muslim women activists, which is going around for signatures of Muslims, says that abusive and anonymous phone calls are being made to the families of the two women activists asking them to ensure the safety of their wives, sisters and daughters. The callers demanded that the activists give up the campaign against the MMDA.

“We, as Muslims, have always condemned the use of violence, threats and intimidation. We stood united against such intimidation when used against members of our community by nationalist Buddhist groups, and will therefore not accept the use of such tactics by members of our own community. We continue to assert Islam is a peaceful religion, tolerant and accepting of diversity, and will resolve differences through peaceful means,” the statement said.

“Women’s groups have not suggested that Muslim Personal Laws be repealed. They only ask for reforms to protect the rights of women and girls. We recognise differing views within the community on the extent of reform, but there is broad acceptance that the law has to be reformed,” the statement said.

A run through of the endorsing signatures in the on-line statement shows that very few Muslim men have signed so far.
Express News Service