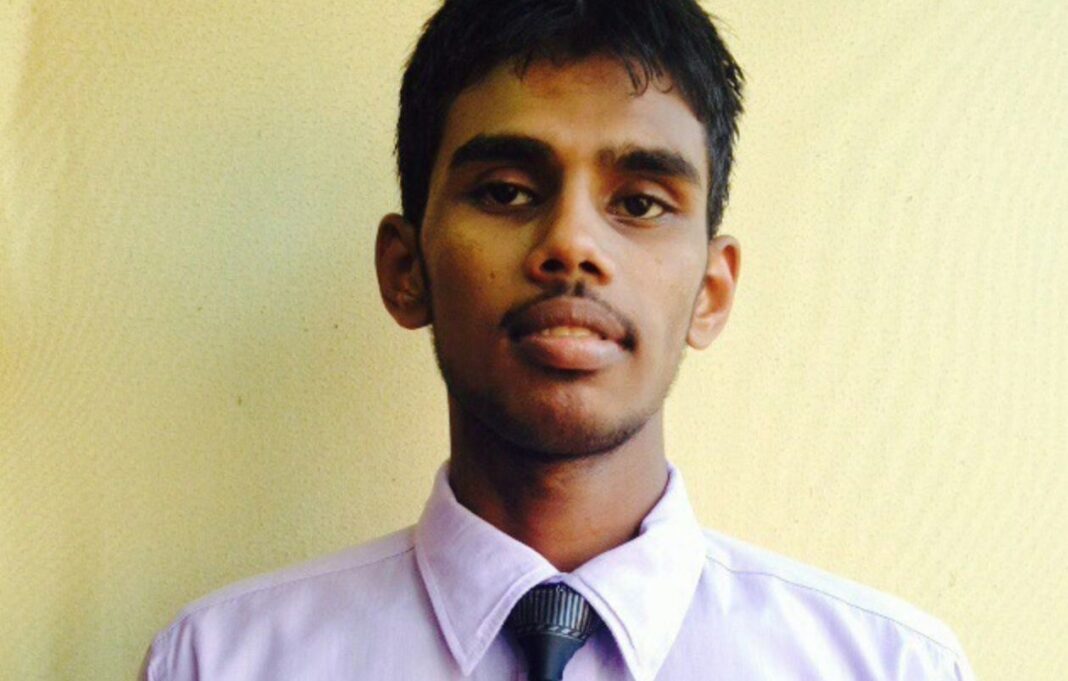 Ahnaf Jazeem, a 25-year-old Sri Lankan poet, remains in jail without charge after being falsely accused, by the Crime Investigation Department (CID) on May 16, of promoting Muslim extremism. He is being held under Sri Lanka’s draconian Prevention of Terrorism Act (PTA).

A scheduled December 8 court hearing was postponed until March 2021 on the pretext of concerns about COVID-19 infection. Ahnaf’s continuing incarceration is, in fact, part of the Rajapakse government’s ongoing anti-Muslim witchhunt and attacks on freedom of expression.

The PTA, which allows the authorities to detain anyone for months without charge, and to use confessions extracted under torture as evidence in the courts, was widely used during Sri Lanka’s 30-year communal war against the separatist Liberation Tigers of Tamil Elam (LTTE).

Thousands of Tamil youth in the north, east and south of the country were arrested and detained as LTTE suspects during the conflict. While hundreds remain imprisoned, many were “disappeared” after being arrested.

The CID is attempting to link the poet, whose pen name is Mannaramudhu Ahnaf, to last year’s Easter Sunday bomb attacks on churches and hotels by an ISIS-linked extremist group. The bombings killed 269 people and injured hundreds more.

The CID has alleged that one of his poetry books— Navarasam (Nine different moods)—demonstrates that he supports terrorism. These claims are false. In fact, the book promotes peace and ethnic unity, and is hostile towards the murderous policies of ISIS, declaring that it has no connection with Islam.

One of the poems, entitled Uruvakku (Mould), condemns armed violence and suggests that words and writing are weapons—i.e., that the pen is mightier than the sword.

Mandrak kavi (Forum Poet), another poem, denounces ISIS as scoundrels. Others oppose the US-led imperialist wars in the Middle East and artistically, and with great sympathy, voice concern about the plight of refugees who have lost their lives while crossing the Mediterranean Sea.

Following an order from the Fort Magistrates’ Court in Colombo, some of Ahnaf’s poetry was sent to child psychiatrists at the Lady Ridgeway Hospital, a premier hospital for children. This was necessary, police claimed, because he had circulated his book to the children. The poems, which were not written in simple language, but in traditional style, were translated word-for-word, and, on the basis of these inadequate translations, deemed to be harmful.

According to the DailyFT, the report presented to the court declared that the book “incites violence, arouses sexual feelings, promotes suicide, glorifies death, talks of perceived injustice against Muslims across the world, and incites hatred against the perpetrators of violence in some of the poems.”

However, in another poem, which he published on his blog the day after the Easter attacks, Ahnaf bluntly, and in clear language, condemns the attacks and ISIS, whilst expressing solidarity with their victims. The CID, however, purposely ignored this poem.

Ahnaf is originally from Silavathurai in the northern district of Mannar and was undertaking tuition at the School of Excellence in Madurankuli at Puttalam district, when he was arrested. The school, which is owned by the Save the Pearl charity organisation, is being investigated by the CID, which is attempting to link it to the Easter attacks, or for promoting Muslim extremism in Sri Lanka.

Prominent lawyer Hejaaz Hizbullah, an associate of Save the Pearl and a human rights activist, has been detained under PTA laws since April this year. He has denied any connection to the bomb attacks and has filed a writ against being prevented from meeting with his legal counsel.

Human rights organisations in Sri Lanka and internationally have condemned Hizbullah’s jailing and demanded his immediate release. While he has been imprisoned for more than nine months, the police have not filed any charges against him.

It is not clear how many others remain in custody over the terror bombings. Many public figures, including former government minister Rishad Bathiudeen and his brother Riyad Bathiudeen, have been detained. Both were later bailed.

Clear evidence, however, has revealed that former leaders of the previous government, along with the military and police hierarchy, were given intelligence warnings in advance of Easter Sunday. Political leaders forewarned included then President Maithripala Sirisena, Prime Minister Ranil Wickremesinghe and the parliamentary opposition chief. They took no action and allowed the attacks to take place, in order to stampede developing class struggles.

The Colombo media continues to use the terror bombings to stir up anti-Muslim sentiment, as does President Gotabhaya Rajapakse, who made it central to his election campaign, and that of his brother Prime Minister Mahinda. This hysterical anti-Tamil propaganda is being endorsed by the opposition parties and utilised to divide and weaken the working class.

The Rajapakse government is deliberately promoting divisive communalism and anti-democratic attacks on writers as it confronts rising working-class struggles against its big business policies, its grossly inadequate response to the COVID-19 pandemic and moves towards a military-based presidential dictatorship.

Ahnaf, whose incarceration only came to light in September, after his poem was used in Hizbullah’s case, is the latest victim of the government’s anti-Muslim witchhunt. The young poet is from a poor family, whose seven members are dependent on meagre earnings from casual jobs and small-scale cultivation. They cannot afford to hire a lawyer, let alone visit Ahnaf in prison.

Ahnaf’s family has not been informed about his current location, the prison conditions he faces or anything about his legal situation. Last week he was allowed to phone his parents for a few minutes, to tell them that he was okay and to find out how they were.

The Socialist Equality Party (SEP) and the International Youth and Students for Social Equality (IYSSE) unreservedly oppose Ahnaf’s detention. The ongoing imprisonment and witch-hunt of this young poet is an attempt to silence writers, artists, intellectuals and all those who oppose government attacks on basic rights. We urge workers, youth and intellectuals to demand Ahnaf’s immediate release, and to fight to defend his democratic rights and freedom of expression.