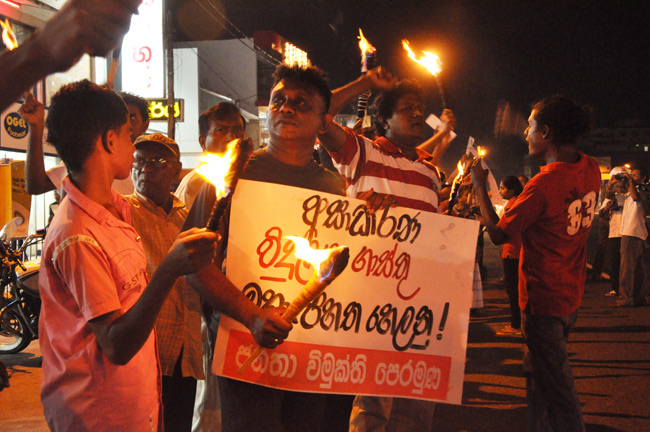 Profit results published by Sri Lanka’s corporate sector for the financial year that ended in March 2013 demonstrate that a handful of big businesses are pocketing the country’s wealth while the working people are being forced to bear stringent austerity measures.

The brutal exploitation of workers’ labour power is most starkly revealed in the plantation sector. While company profits rose nearly four-fold, plantation workers remained among the lowest paid in Sri Lanka.

Under a secret wage deal struck this month between the unions and management, behind the backs of the plantation workers, the daily wage was increased by only 70 rupees (55 US cents), frozen for two years and subjected to increased productivity quotas.

Yet, during the final quarter of the financial year alone, Horana Plantations Plc almost trebled its profits to 100 million rupees, while Bogawantalawa Tea Estates Plc’s gross profits surged more than five-fold to 170 million rupees. A substantial devaluation of the rupee, dictated by the International Monetary Fund (IMF), and stronger international tea prices were the main factors boosting plantation profits.

Health sector profits grew because increasing numbers of patients were compelled to go to private hospitals, often forcing them to exhaust their savings and sell off any property. That is because the Sri Lankan government has drastically run down the free health care system.

Similarly, the private generating companies that sell power to the government-owned Ceylon Electricity Board (CEB) are reaping huge profits at the expense of the CEB, which posts large losses and depends on treasury funds. In order to implement the IMF’s demand to reduce the budget deficit, the government has increased household electricity bills by a staggering 68 percent. But it government has no intention of touching the profits of the private electricity producers.

Overall, corporate profits rose by an average of 10 percent during the financial year. The NDB report stated: “Total profits of the sample set of 93 companies, considered to represent the market, which contribute 77 percent of total market capitalisation of the stock market, increased by 10 percent year-on-year.”

The stock market itself is manipulated by those sections of the business and financial elite backed by the government, so that big investors make huge profits at the expense of small investors. Workers’ pension funds and the deposits held by state banks are used for these purposes.

Local banks, the Sampath Bank and Union Bank, reported more than 50 percent increases in profits, up to 5 billion and half a billion rupees respectively. Likewise, net profits of insurance companies Ceylinco Insurance and Union Assurance rose by 24 percent and 33 percent, up to 1.65 billion and 921 million rupees, respectively.

Bank profits were mainly generated by lending at high interest rates while depositors were kept on low interest rates. As well, banks gained from the devaluation of the rupee.

The predatory interest rates of the banks have impacted severely on businesses. Sri Lanka Chamber of Small and Medium Industries president Aloy Jayewardena recently reported that about a quarter of the country’s smaller enterprises had collapsed over the past two to three years “amid gruelling financial hardships, including bank interest rates on loans, which have soared to 18 percent.”
President Mahinda Rajapakse’s government has also helped boost profits by keeping the maximum corporate tax rate at just 28 percent. At the same time, Rajapakse, who is also finance minister, has imposed new burdens on working people through a tight wage freeze, subsidy cuts and increased taxes on basic food items, energy and other essentials.

The living conditions of the working class are deteriorating day by day. In a report released last November, the Central Bank warned the government not to increase wages without so-called productivity improvements, because that would lead to “wage induced inflationary pressures.” Productivity improvement refers to intensifying the exploitation of workers through extended working hours, greater speedups and heavier workloads.

Social inequality is becoming more glaring. Addressing a recent seminar, economics professor A.V. De S. Indraratne said: “Sri Lanka is a $US60 billion small economy with 20 million people, with a per capita money income of $US2,920, but 2/5 or 40 percent of this population having only a quarter of this amount as their per capita income, in other words, living on less than $US2 a day.”

The latest official Household Income and Expenditure Survey showed that in 2009-10, the poorest 20 percent of the population received only 4.5 percent of the total household income, while the richest 20 percent received 54.1 percent. The survey pointed out that almost half of the income of average households was spent on food.

According to this survey, the minimum monthly income needed to provide for a family of four would be 32,000 rupees ($US252). Even though this figure failed to take into account the soaring cost of living, most working class households are struggling to survive on less than half this amount. As a result, workers are undertaking longer working hours, sacrificing holidays and working at breakneck speeds.

The government’s national poverty line for March 2013 was 3,659 rupees per month, or 121 rupees (95 US cents) a day, which is hardly sufficient to buy a packet of rice meal for a single person. Even by this measure, close to two million people live in such grinding poverty.