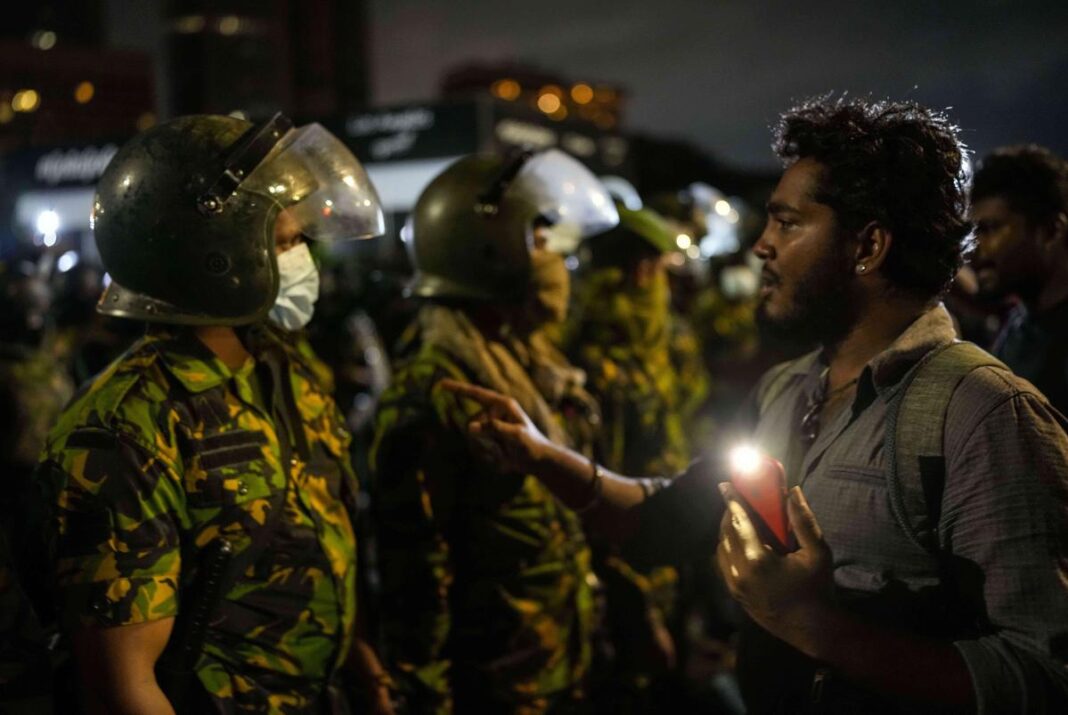 A protester tries to speak with an army officer at the site of a protest camp outside the Presidential Secretariat in Colombo, Sri Lanka. File. | Photo Credit: AP/The Hindu

Citizens’ groups and activists in Sri Lanka have expressed concern over a series of arrests last week, of prominent members of the recent anti-government protests, terming it a “witch-hunt” by the state.

Their allegation comes a week after Ranil Wickremesinghe took charge as President of the island nation, capping weeks of political unrest and uncertainty, sparked by the economic implosion in Sri Lanka earlier this year.

Within 24 hours after he was sworn in, the military assaulted protesters and demolished their tents at Colombo’s main agitation site, near the sea-facing Presidential Secretariat. Lawyers and the media were barred from entering the area during the pre-dawn raid on July 22 that drew wide condemnation domestically and internationally, including from the UN. In the days since, several activists associated with the ‘Janatha Aragalaya’ or People’s Struggle, have either been arrested or have arrest warrants issued for them.

Sri Lanka is currently under Emergency rule, promulgated by Mr. Wickremesinghe on July 17 when he was acting President. It was ratified by Parliament earlier this week. Human rights defenders point to both, the Emergency, and the subsequent actions of the military and police, as attempts to “stifle dissent.”

The declaration of an Emergency sent “a chilling political message”, observed human rights activist Ruki Fernando. “That the Parliament ratified the President’s decision [on the Emergency] only shows that both the executive and the legislature are now on a repressive path,” he said

According to Ambika Satkunanathan, a former commissioner at the Human Rights Commission of Sri Lanka, declaring a State of Emergency has been “the default strategy” of executive presidents over the decades. “We have seen its devastating impact on human rights, particularly dissent and media freedom. During a state of Emergency, the military and police are granted excessive powers without any judicial oversight. Though the pre-dawn military raid took place under the cover of the Emergency, the actions we saw that day cannot be justified legally,” she told The Hindu, referring to soldiers surrounding unarmed protesters with no warning, and assaulting them despite an assurance from demonstrators to vacate the space that afternoon.

The declaration of an Emergency sent “a chilling political message”, observed human rights activist Ruki Fernando. “That the Parliament ratified the President’s decision [on the Emergency] only shows that both the executive and the legislature are now on a repressive path,” he said.

Ms. Satkunanathan also flagged an apparent violation of due process in recent police action. “For instance, the way police took activist Veranga Pushpika from a bus, and kept his whereabouts unknown for several hours, denying him access to his lawyers and family, and the Human Rights Commission, technically amounts to an enforced disappearance,” she noted.

Mr. Pushpika, who had been active in the Galle Face oceanfront agitations, is a former student activist and journalist, who was abducted from a bus by men in civil clothes on July 27, a day that witnessed more arrests. Four protesters who had handed over to the police large amounts of money found at the President’s house on July 9 were arrested and denied lawyer access, according to rights groups. A Colombo-based media company had an unusual visit by men in plain clothes, demanding details of its employees. The same day, the Young Journalists’ Association made a complaint to the Human Rights Commission about the imminent arrest of investigative journalist and human rights defender Tharindu Uduweragedera. Later, police visited a church in the southern Ratnapura district, claiming they had orders to arrest Fr. Jeewantha Peiris attached to it. The priest, who has been working with marginalised communities for years, was part of the peaceful seaside protests in Colombo since March.

President Wickremesinghe earlier referred to protesters as “fascists”, while Ministers and ruling party MPs invoked the language of “terror” in a recent parliamentary debate, and even accused the “LTTE diaspora”

The government must show political stability in order to tap external assistance for economic recovery. Although “Gota go home” was the central demand of the months-long agitations, his resignation earlier this month did not end citizens’ demonstrations. In fact, sections of protesters accuse Mr. Wickremesinghe of being an enabler of the discredited Rajapaksas and seek the new President’s resignation too. Meanwhile, activists see a pattern, and a motive in the state’s recent moves. “We must remember that the President himself, several government politicians, and police have been repeatedly trying to discredit the Aragalaya and protesters in their media statements,” Mr. Fernando said.

President Wickremesinghe earlier referred to protesters as “fascists”, while Ministers and ruling party MPs invoked the language of “terror” in a recent parliamentary debate, and even accused the “LTTE diaspora” — an apparent reference to sympathisers of the Tamil militant group that was defeated by the armed forces in 2009 — of backing the citizens’ uprising witnessed mostly in the island’s Sinhala-majority south.

When contacted, Minister of Justice Wijeyadasa Rajapakshe said the police were arresting only those linked with “criminal activity” and that the government had no issue with “peaceful protesters” and “even supported them”. “But when they engage in killing, injuring others and damaging public property, the rule of law must be upheld. We feel some political groups with a violent past hijacked the protests,” he said, alluding to the leftist Janatha Vimukthi Peramuna (JVP), that led two armed insurrections in the early 1970s and late 1980s.

The party, which has since predominantly engaged in parliamentary politics, has categorically denied the accusation that is frequently made by the government, with little evidence backing the claim.

The Minister seemed to be referring to the retaliatory violence on May 9, after Rajapaksa supporters attacked peaceful protesters. The day-long violence saw incensed citizens assaulting government members or supporters, carrying out arson attacks on ruling party members’ properties — a southern MP was killed — actions that many protesters in the Aragalaya emphatically condemned and distanced themselves from.

For rights defenders, the current, growing climate of fear and “state repression” says more about the President and the government, and far less about the protesters. “President Ranil Wickremesinghe is no democrat, he is no progressive. He is quite like the Rajapaksas or even worse,” Ms. Satkunanathan said. In her view, his recent actions are his “likely attempts to assert authority, to flex his muscles” to the military, police, Rajapaksas and their party. Apart from telling state actors that “their abuse will be tolerated”, they create “a climate of fear and further entrench impunity”. “These incidents only exacerbate instability and public anxiety,” she contended.

Further, she sees the “targeted witch-hunt” as a form of reprisal against people or groups Mr. Wickremesinghe suspects were behind the [July 9] arson attack on his home. “Mr. Wickremesinghe should act like someone responsible for the lives of 22 million people and not treat the Presidency like his fiefdom, acting in ways that are petty, harmful and vicious,” the activist said.

Civil society organisations are resisting in different ways. “We condemn outright the violence against peaceful protesters. We especially condemn the labelling and mis-and disinformation against those the state portrays as ‘leading and organising’ protests despite the fact the protests do not have leadership,” they said in a statement on Thursday, signed by over 150 members and 10 organisations across the island.

“The Sri Lankan state and the Wickremasinghe government must immediately cease the attacks on protesters and civic activists and those perpetrating violence against protestors should be held to account. Peaceful protest and defending human rights are not crimes. The government must remember and respect this,” the organisations said.