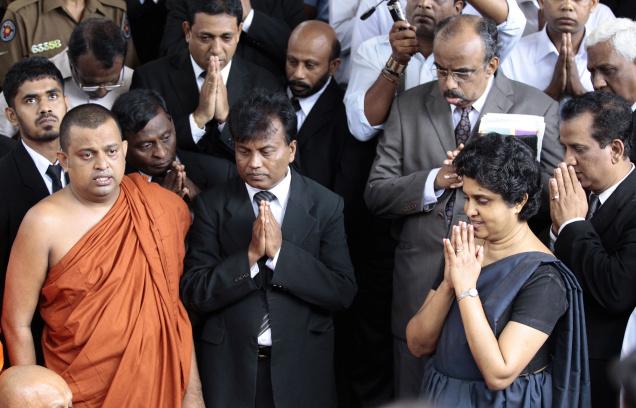 9
With a parliamentary panel finding her “guilty” of misconduct, it is certain Sri Lankan Chief Justice Shirani Bandaranayake days at the helm of judiciary are numbered, but that has not prevented various groups of people from rallying around her.
“The issue is getting a lot of traction in Sri Lanka. It is not like the time when the impeachment process began,” said a senior diplomat. A few opposition politicians, and civil society activists that The Hindu contacted, concurred with this view.
Buoyed by the support, Dr. Bandaranayake has challenged the findings of the parliamentary select committee (PSC) in the Court of Appeal on Wednesday. The law firm that represents her, Neelakandan and Neelakandan, claimed that the committee did not give her a fair hearing “in accordance with the principles of natural justice and the law of the land”. But the crux of the petition is this: It challenges the very constitution of the committee and argues that the PSC appointed to inquire into the charges against the Chief Justice was inconsistent with the Sri Lankan Constitution. The petition is likely to come up on Friday.
In fact, legal experts that The Hindu spoke to were of the view that the PSC constituted had a very basic flaw. “The same PSC cannot be the jury and the judge. This is the main legal issue which seems to have been over looked,” one expert said. In his view, there should have been two PSCs: one, to probe into the allegations, and the second, to act as a judge.
Even as the legal battles are on, lawyers and various other groups of people have demanded that President Mahinda Rajapaksa intervene and stop the impeachment proceedings. In a letter to the President, four top Buddhist religious heads had requested the President to reconsider the move to impeach. Later, the Buddhist religious heads and representatives from other religions sent an open letter to the President on the same issue. Sensing the mood across the board, Mr. Rajapaksa, on December 11, said that the PSC report on the impeachment against the Chief Justice will be evaluated through an independent committee.
Elsewhere lawyers for and against the impeachment organised rallies, demonstrations, public meetings, and mass signature campaigns, to drive home their diametrically opposite demands. But the most important development related to the December 15 meeting of the Bar Association of Sri Lanka (BASL). At the special general meeting, BASL passed a resolution which said that the Bar would refrain from officially welcoming any new Chief Justice appointed on the basis of a vacancy created by “wrongful impeachment.”
Caught between the need to be seen as standing up for one of their own and not antagonising the government, BASL officer bearers have been facing a tough time. Gun shots were reportedly heard near the house of its president Wijeyadasa Rajapaksa on Thursday early morning. He has lodged a complaint. President Mahinda Rajapaksa visited his house later in the day, Daily Mirror Online reported.
Making the government’s displeasure with the Bench and the Bar clear, it also announced a withdrawal of sponsorship for an annual programme of the Judicial Service Association slated for December 21. “It is reported that the judges will proceed with the meeting for one day with their own personal contributions,” the Asian Human Rights Commission said in a statement. “Obviously, the government has tried to stop this annual gathering where the judges normally spend two days and also have the opportunity to interact with each other and to socialize. The obvious fear would be that the judges will naturally talk about the threat faced by the independence of the judiciary in Sri Lanka,” it added.
Lawyers Collective, another Non Governmental Organisation of lawyers, in a statement, condemned the move. “The Secretary to the Ministry (Ms. Malkanthi Wickramasinghe) had informed the JSA on 18th December that the Minister [Vasudeva Nanayakkara] does not wish to sponsor this programme (conference), notwithstanding the MOU singed and an advance being paid for the venue of the Conference. Thus the sponsorship of UNDP has been withdrawn officially due to arbitrary and politically motivated decision of the Ministry,” it said.
Dr. Bandaranayake, who was first inducted into the Supreme Court with no experience in the Bench or the Bar, was hand picked by President Mahinda Rajapaksa to head the country’s Apex Court. It appears she fell out over a piece of legislation that gave control to spend about LKR 80 billion to a Ministry run by the President’s brother, Minister Basil Rajapaksa. A Bench headed by Dr. Bandaranayake held that since the Divineguma Bill interfered with the power of the provinces, the Bill had to be passed by all provincial councils.
This created a new set of problems for the government. But the President has been steadfast in his assertion that the massive corruption of the Chief Justice and her husband was the reason for the PSC to take recourse to impeachment.
Hindu
Share
Facebook
Twitter
WhatsApp
Pinterest
Email