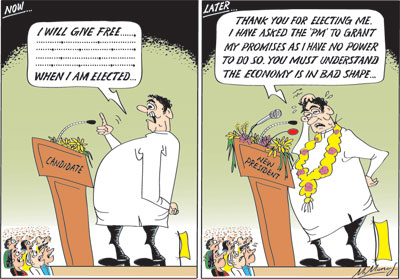 On November 16, a new pesident will be elected. Will the election usher in political stability or will the post-election period be one of confusion and chaos? Are there prospects of an economic revival? Would the election lead to a period of political instability?

If the newly elected president does not accept this constitutional position, the country could be in political chaos similar to the anarchy of October 2018. This would have dire economic consequences. Such a constitutional crisis is the worst possible outcome of this presidential election. A conflict between the newly elected president and the Prime Minister would cripple the economy.

The weak external finances and external financial vulnerability would be compounded by political instability. The sooner a parliamentary election is held and a stable government established the better the prospects for an economic recovery.

The election campaign of most candidates did not disclose an awareness of how they would resolve the very serious economic problems facing the country. Instead, if the election promises made by the elected president are implemented, the economy would be in a worse crisis.

The Sri Lankan electorate knows fully well that election promises, bar a few, would not be implemented. What the electorate does not know and understand is that resources are limited, in fact very scarce, and that the need of the hour is a resolve to implement stringent fiscal policies and limit public expenditure.

The consequences of the increased fiscal deficit would be, inter alia, an increase in the public debt, inflationary pressures, weakening of the country’s export competitiveness and low economic growth.

These consequences of an expansion in the fiscal deficit are serious. They will erode price stability, increase public debt, exert pressures on the exchange rate, affect external trade adversely and people’s livelihoods would be affected on top of the adversity caused by the tourism crash that has been experienced. With economic fundamentals being eroded, the country is heading towards an economic crisis.

The political compulsions of the elections have driven the government to adopt policies that are vote catching. These are moving the economy into the brink of a fiscal and economic crisis. The economy’s macroeconomic fundamentals are being seriously eroded by politically motivated economic policies. This is especially so with respect to heavy public expenditure that would expand the fiscal deficit, increase the public debt and release inflationary pressures that would affect the economy adversely both in the short run and longer term.

Neither the electorate nor the candidates are aware that what is needed is fiscal austerity and not fiscal profligacy. A renewed process of fiscal consolidation could begin only with the budget for 2021. The 2020 budget is likely to be a fiscally imprudent one with further handouts, increased public sector employment, salary increases and other politically motivated unproductive expenditure. Therefore fiscal slippage will worsen before remedial measures could be implemented. The fiscal deficit target of 3.5 percent of GDP in 2020 is now a distant dream.

The inadequacy of revenue to even meet the debt servicing costs is alarming. Debt servicing costs absorbing the entirety of government revenue implies that the government’s current and capital expenditure have to be from further borrowing. This is an unhealthy situation like the plight of a household whose total income has to be spent on debt repayments and has to borrow for even its basic consumption needs.

The inadequacy of revenue to meet debt servicing costs means that funds are not available for other essential expenditure. Consequently, all current and capital expenditure have to be met by further borrowing from domestic and foreign sources. This lack of funds from revenue results in a distortion in priorities in public spending. There is an inadequacy of public expenditure for education, health and development projects. It is in this fiscal context that promises are made to spend money in various ways.

The increasing debt — both domestic and foreign – is a serious economic concern. The acknowledged threshold for the fiscal deficit is about 3 to 4 percent of GDP and the debt-to-GDP ratio is expected to be kept at no higher than 60 percent of GDP. The current position exceeds both these thresholds.

Resolving the deterioration in macroeconomic fundamentals would be a herculean task for whoever forms the government. Only deep surgery can resolve the economic crisis. The massive public debt, whose servicing costs absorb more than the entirety of government revenue, would pose a serious difficulty with inadequate finances for development needs. Restoring the eroded business confidence in such macroeconomic background would indeed be difficult. In turn, inadequate economic growth would impact on the employment, incomes and livelihoods.

The adoption of sound economic policies would have to await a new government after the parliamentary elections. Meanwhile, the state of the economy is likely to get worse and the remedial measure more difficult to adopt. The fiscal slippage that is occurring is a fundamental weakening of the economy. It would create serious economic difficulties. Restoring economic stability and enhancing economic growth are massive challenges for the next government.