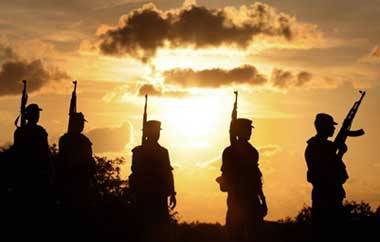 CV Wigneswaran, the Chief Minister of Sri Lanka’s Tamil-majority Northern Province, expressed doubts if the assassination story involving the Tamil National Alliance (TNA) senior parliamentarian M A Sumanthiran was an attempt by the government not to reduce the presence of military in the north.

Wigneswaran, the hardline Tamil chief minister, said those arrested for the alleged assassination attempt on Sumanthiran were taken into custody on charges of possessing narcotics.

“They have not been charged with attempting to murder a parliamentarian,” Wigneswaran said.

He said it gave rise to suspicion that if the motive was to keep the military in the Northern Province, claiming it would be risky to remove them from the former war battered regions.

Sumanthiran in response today said he could not verify the truthfulness of the assassination plot, yet Wigneswaran’s statement was wrong.

Former President Mahinda Rajapaksa blamed the current government for relaxing strict security measures he had deployed in the north and east of the island after he had militarily ended the LTTE’s separatist campaign which lasted over three decades.

Repealing the PTA and reducing the military presence in the north and east are among other key demands of Tamil groups to achieve reconciliation with the Tamil minority.