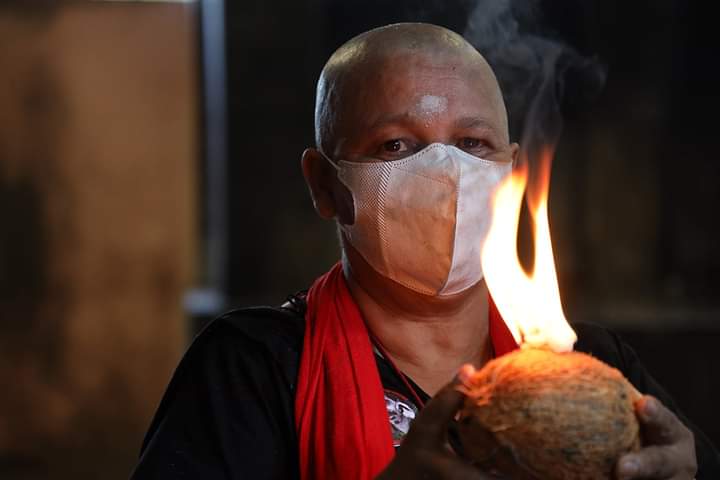 Colombo (AsiaNews) – Sandhya Eknaligoda shaved her head and asked for divine intervention so that she can have justice for her husband who went missing 12 years ago.

She is convinced that Rajapaksa supporters kidnapped her husband, Prageeth, a journalist who was investigating into allegations that the government had used chemical weapons against Tamil Tigers.

Prageeth Eknaligoda went missing in 2010 when Mahinda Rajapaksa was president; his brother, Gotabaya Rajapaksa, is the current president.

Recently, the Eknaligoda Forum organised a “puja” to mark the 12th anniversary of the disappearance of the Sri Lankan cartoonist and reporter. The ceremony began on Monday at the Nawagamuwa Pattini Devalaya monument and continued at the Kaali Kovil temple in Mutwal on Tuesday.

Sandhaya Eknaligoda told reporters that she did not trust the Sri Lankan judicial system. “I believe Kaali Mani (Mother Kaali) can punish those who perpetrate such a thing in this country,” she said. “So, today I’m going to shave my head for Kaali Mani [. . .] until I get justice.”

Refusing to give up, she said, “I have walked all over this country looking for my husband. There is evidence that my husband was abducted. I have filed a lawsuit.”

“The Rajapaksa returned to power in 2019. This is why I have no faith in what will happen in court. Witnesses who say they spoke to my husband now say they lied. They have become a joke. So how can I expect justice from the courts.”

In 2017 Sandhaya Eknaligoda received the International Women of Courage Award for her relentless fight.

She accuses the Rajapaksa administration of being involved in her husband’s abduction. He has not been seen since 24 January 2010, two days before presidential elections.

At the time, he was working as a freelance journalist for a pro-opposition website and had participated in the presidential campaign of candidate Sarath Fonseka.

“I would like to say one thing to the Rajapaksas,” Sandhaya Eknaligoda noted. “Even if you kill a man named Prageeth Eknaligoda, that man’s genes, that man’s creations, that man’s thoughts, what that man built, will be passed on to his children.”

What is more, the struggle “is for people seeking justice, the rule of law, and building a better country,” she added during the puja.

The government has always denied the allegations, but in 2008 the reporter had started investigating the government’s use of chemical weapons against Tamil Tigers in the north of the country.

Before he disappeared, he was seized once, in August 2009, and released after 24 hours.