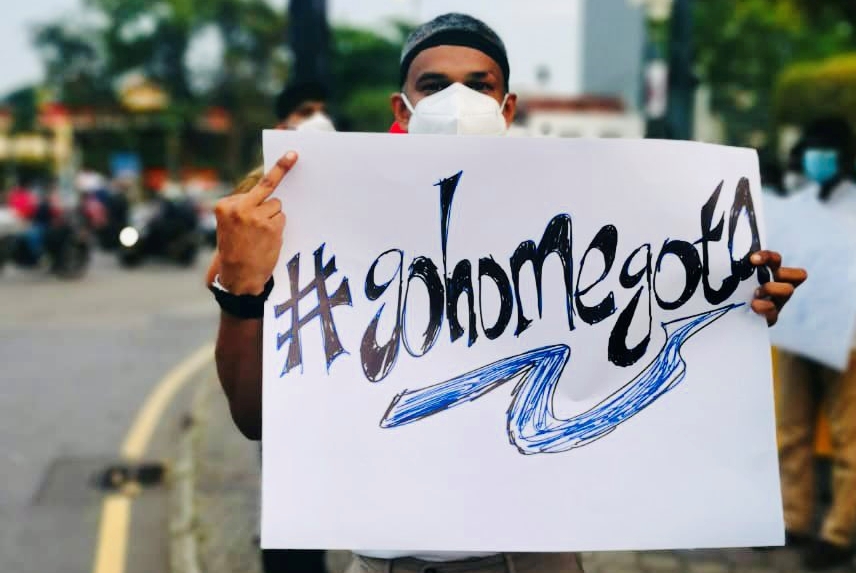 March 15 feels like a tipping-point. The citizens addressed the President a day before the President addressed the citizens. The Samagi Jana Balavegaya (SJB) lived up to its name with the massive wave of popular protest that hit the seat of power, Colombo, getting in the face of the armed STF at the Presidential Secretariat, setting fire to a coffin with President Gotabaya Rajapaksa’s name on it. Belying (or notwithstanding) media speculation of internal dissonance, the SJB proved itself an impressive mass movement with a militant edge. There was no doubt that its target was Gotabaya Rajapaksa’s rule.

“As a Realist I recognise there’s not going to be any broad Opposition unity and the Opposition space will remain unevenly bipolar, so I rely on the driver of competition which will generate and guarantee sufficient anti-regime momentum and energy for change. “

On a makeshift platform, Sajith Premadasa was cheering the crowd, pumping his arms with a clenched fist salute. This sure ain’t Ranil Wickremesinghe’s UNP. This is a post-UNP populist party with a youthful new leader, capable of mass mobilisation and confrontation.

Premadasa pledged that the demonstration was the commencement of a national campaign to replace Rajapaksa rule, promising to build the Movement drilling-down past the Pradesheeya Sabha to the village.

He asserted with no little credibility that the SJB was the alternative to Rajapaksa rule and offered the regime an offramp: a snap Presidential election, with Parliament voting through the necessary amendment.

The JVP can mobilise a massive crowd too but the SJB holds the capital city and its streets, the parliamentary numbers, the real estate of Opposition leadership and the second-generation name-recognition of its leader. With the country having seen the 15 March manifestation on the TV news, only cosmopolitan critics and carping commentators imitating an ostrich can continue to whine “So what is the alternative? Where is the alternative? Who is the alternative?”

As a Realist I recognise there’s not going to be any broad Opposition unity and the Opposition space will remain unevenly bipolar, so I rely on the driver of competition which will generate and guarantee sufficient anti-regime momentum and energy for change.

The Nikkei is the world’s largest-circulation financial newspaper which sells over 3 million copies. It bought up the Financial Times, London. It wrote this about Sri Lanka on 12 March 2022: ‘Public rage boils as Sri Lanka fumbles with faltering economy’. That was the title of the piece by Marwaan Macan Markar, the Asia Regional Correspondent of Nikkei Asia. Some highlights:

“Random flashes of public anger have erupted all across Sri Lanka, the South Asian nation in a deepening economic crisis exacerbated by the policy flip-flops of its ultranationalist government.

In some rural areas, effigies of ministers have been burnt by enraged farmers who have suffered from the government’s failed organic fertiliser policy, fingered by agriculture scientists as a main cause of the poor rice harvest.

“If they come here they will go home in a box,” a 52-year-old farmer in the north-central Anuradhapura region fumed, using an ominous idiom for a coffin.

A cooking gas shortage has forced hundreds of bakeries to shut down, milk products have become pricey – particularly hurting families with young children – and medicines are in short supply at pharmacies. Regular and lengthy power outages plunge much of the country into darkness, adding to the woes.

A recent opinion poll by Verite Research, a Colombo-based think tank, mirrored the trend. President Gotabaya Rajapaksa’s administration received only a 10% approval rating – a dramatic contrast with the soaring popularity the hawkish candidate enjoyed when he won a landslide election victory in the November 2019 presidential derby, 11 points ahead of his main rival…” (Public rage boils as Sri Lanka fumbles with faltering economy – Nikkei Asia)

The Government’s excuse is that most of the factors are external shocks. Others blame corruption, failures of successive governments since Independence, Modern Monetary Theory, deficits and lack of fiscal discipline.

None of it really explains the rage. The rage is because the citizens know that the main cause is neither inherited nor extrinsic, but a matter of choice by the country’s ruler who shows absolute lack of empathy with their undeserved pain. On the day of the demonstration, 15 March, President GR urged the District Secretaries to press on with zeal with the organic fertiliser policy, claiming that the farmers who used it well, had higher yields this Maha harvest season. (LankaCNews)

Forbes, the leading international business magazine, blows the whistle, writing to a world audience that “Organic Agriculture Nightmare Tanks Sri Lanka’s Economy” (Forbes, March 10-11, 2022). It is the President’s organic agriculture decision that is identified out of the many that could have been listed as responsible for tanking Sri Lanka’s economy. James Conca traces what made the economy ‘tank’:

“Contrary to claims that organic methods can produce similar yields as conventional farming, domestic rice production fell 20% in just the first six months. Sri Lanka, long self-sufficient in rice production, has been forced to import $ 450 million worth of rice even as domestic prices for this staple of the national diet surged by 50%.

The ban also devastated the nation’s tea crop, its primary export and source of foreign exchange, accounting for 70% of total export earnings. Just yesterday, the Central Bank of Sri Lanka devalued its currency as its foreign reserves dwindled, potentially accelerating the worst inflation surge in Asia as the nation struggles to service its debt and pay for imports.

…The drop in tea production alone will result in economic losses of over $ 400 million. Today, half a million Sri Lankans have sunk back into poverty. …

…It’s not possible for the nation to produce enough fertiliser domestically to make up for the shortfall since that would require five to seven times more animal manure, which would require a huge and costly expansion of livestock holdings, with its own environmental damage.

The loss of revenue from tea and other export crops dwarfed the reduction in currency outflows from banning imported fertiliser. The bottom line turned even more negative through the increased import of rice and other food stocks. And the budgetary savings from cutting subsidies were more than outweighed by the cost of compensating farmers and providing public subsidies for imported food.…Rajapaksa continues to insist that his policies have not failed…” (https://www.forbes.com/sites/jamesconca/2022/03/10/organic-agriculture-nightmare-tanks-sri-lankas-economy/?sh=16d7b2d89b4c)

As noted in my last column, the prestigious periodical Foreign Policy (out of Washington DC) carried in its 5 March issue, a piece by Ted Norhaus, the Executive Director of the Breakthrough Institute, on President Gotabaya Rajapaksa’s signature policy. It was entitled ‘In Sri Lanka, Organic Farming Went Catastrophically Wrong’.

The Foreign Policy story and the Forbes story, covering two very different readerships, both highly-placed and influential, traversed much the same scientific and economic ground.

So, the world and the Sri Lankan people know what went wrong and who was primarily responsible for the triple catastrophe: agricultural/rural, socioeconomic and human.

“Go Gota, Go! Go Gota, Go!” was the catchiest chant, accompanied by rapid, rhythmic hand-clapping at the huge SJB demonstration. Its most memorable iteration was by a group of MPs and activists standing on the Galle Face embankment (in the Port City direction), holding aloft flaming torches.

Multiple systemic dysfunctionalities have set in. The system is almost broken under the weight of Rajapaksa rule and its cumulative follies. The ensemble of socioeconomic relations has been warped, the everyday lives of citizens twisted and their livelihoods and life-chances choked by Rajapaksa rulership.

Contrary to the liberal intelligentsia which natters on about the executive presidency and the need to abolish it, the people, the victims, are very clear. On a TV newscast, a middle-aged woman, speaking in Sinhala into the camera, bitterly said, “What sort of nonsense is this? We have seen many Presidents, but never one like this! He should get out!” She staggered off with her empty cylinder of gas, wishing loudly that lightning strikes the head of the object of her anger.

By his obduracy, President Gotabaya Rajapaksa has left the country with the starkest of choices today: Rajapaksa rule or the survival of the citizens. The problem is not in the realm of pure economics, but in the domain of political economy. The pain of the people can be relieved only by the replacement of the Rajapaksas. Normal life can be restored only by the removal of an abnormal regime.

The Rajapaksas are turning into objects of public contempt at best; hate symbols at worst. The wisest and safest thing for the SLPP (‘Pohottuwa’) would be to go into Opposition as soon as possible, and for the Rajapaksas, apart from Namal, to retire from politics as soon as possible. His brothers should forget about politics as the people will never tolerate another ‘brotherhood’.

If MR cares for the people, his brothers, his family, and the way his story will be written in history, he should tell his younger brother Gotabaya who stood on his shoulders to become President and is still shielded by him, that for the sake of the family’s name, for the sake of the memories of their father, uncle and cousins, for the political future of any Rajapaksa at any time in the next decades, he must step down immediately from the Presidency and retire from politics. It would be the decent and wise thing to do. Someday the people may forgive him.

Excerpts from a longer article appeared in Daily FT