SRI LANKA: Why are the police allowed and encouraged to lie? 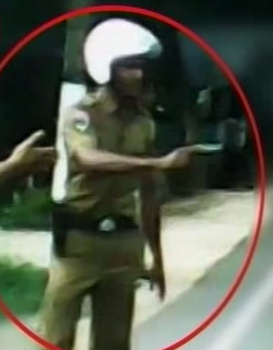 The video footage is fairly clear. First we see a tall policeman wearing a helmet standing with his arm stretched towards the other side of the road. Then we see a scooter stopped just next to him. There is one man sat on the scooter. Looking closer, we see that the policeman is carrying a pistol in his outstretched hand. The pistol is directed towards somebody on the other side of the road. Then we see the rider of the motorbike stretching his hand out towards the policeman, in an obvious gesture telling the policeman not to shoot.
Later, we get to know the story. The policeman shot somebody who was on the other side of the road. The person had been taken to a nearby hospital and there he died.
Then there comes a story that the man who was shot had a sharp instrument in his hand with which he was trying to hurt another policeman. Then there is a picture of a policeman being taken on a stretcher to a hospital. Then the story is that the man was shot not at the time when the video footage shows but eight minutes later.
Now we look at a different incident. Two young men are stopped by a policeman and soon thereafter another group of policemen. One of those policemen shoot one of the two men on the motorbike at point blank range, aiming at their chest. The man dies on the spot.
Immediately thereafter, the police put up a barricade about 120 away from the place where the shooting happened. For the purposes of further inquiries, the place where the shooting happened is supposed to be at this new place where the barricade is. There is a new story: the two people were travelling on a motorbike and, when a policeman signaled them to stop, they did not. Instead, they tried to run over the policeman and so the policeman shot, and that is how the death is supposed to have happened.
The above two scenes are not from a movie or a novel. Actual people are involved. Actual wounding takes place. Actual people die.
The policemen are allowed to erase all that is actual and factual. They are also allowed to create fictions and make up whatever story they like.
This did not just happen in these two incidents but thousands of times day in and day out. Such falsehoods are written as case reports and produced in courts. And of course there is a sacred rule that no one should lie to the court. Yes, but it’s not a rule for everyone. The police are treated as an exception. They can produce false reports. They can produce affidavits with false statements. They can lie from the witness box. How many policemen have been punished by courts for perjury? None.
Yet the law is that the policemen should keep their pocket notebooks with them and faithfully write down every detail on everything they do and on every observation they make. They are supposed to be involved in creating the actual narrative of crimes and these narratives are supposed to be brought to court by way of indictments. The bases for trials are these indictments. How is one to reconcile these two different roles? One role allows any kind of lie; in the other, their substantive role, they are suppose to be guardians of law. Recently a monk was charged for making false statements to the police. Now he has been remanded. Here our interest is not in the truth of that case. Our interest is merely to make a contrast. The policemen throughout the country are making up stories in cases that would otherwise be murders or other serious crimes. They file false affidavits to courts. They lie from the witness box. But none of them are brought to trial in the way that this monk has been brought to trial.
This is the reality that every Sri Lankan is confronted with, including the President of Sri Lanka. Recently, the Minister of Justice cried out that the way the law enforcement agencies ignored the law in the recent attacks on Muslims made him feel ashamed to be a member of the government. Surely the Minister of Justice knows that it is not only during race riots that the police and the STF flout the law. However, he has not shown any shame to call himself the Minister of Justice in those circumstances.
Perhaps shame or any other emotion do not have any place in a country where the law enforcement officers are allowed to lie and are in fact lying almost all the time.
EXTERNAL LINK : Video footage by  Newsfirst Sri Lanka
Share
Facebook
Twitter
WhatsApp
Pinterest
Email