Sri Lanka: Who is Afraid of a New Constitution? – Laksiri Fernando 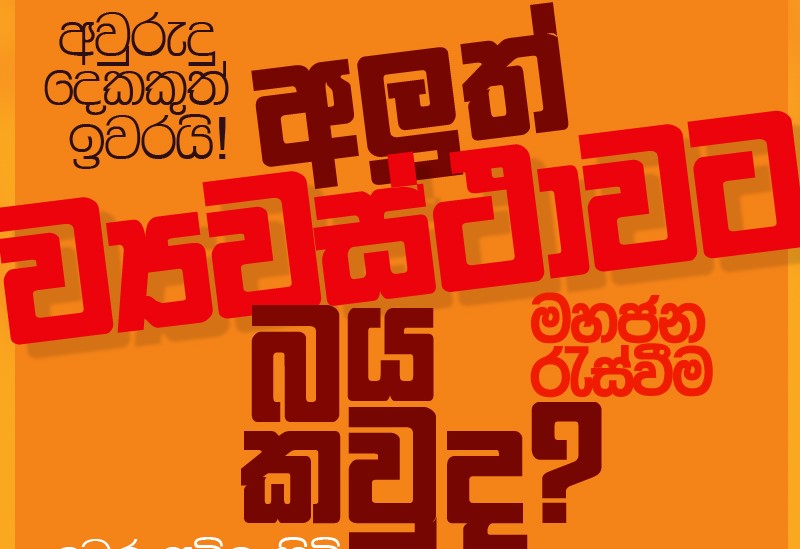 I have simply ‘plagiarized’ the title from the theme on which the People’s Power (PP) and the National Movement for a Just Society (NMJS) have organized a public meeting on this Wednesday, the 18th January at the Colombo Public Library. Whatever the speakers are going to say at that meeting, the theme is sharply accurate in capturing the questioning minds of the ordinary masses on the dubious ‘twists and turns’ of politicians and other public figures on the question of a New Constitution. Who is afraid and why? These are the question I would like to address in this article.

The people of this country have given a mandate to their elected representatives since the 1994 elections repeatedly to draft and promulgate a New Constitution. The main reason has been the authoritarian nature of the power structure under the present constitution. When we refer to the 1994 elections, it means the mandate given to the People’s Alliance (PA) and that is the predecessor of the present United People’s Freedom Alliance (UPFA), including the traditional Left parties. By the year 2000, the United National Party (UNP), the predecessor of the present United National Front for Good Governance (UNFGG) also came around and agreed for a New Constitution.

The main Tamil party, the Tamil National Alliance (TNA), and the main Muslim party, the Sri Lanka Muslim Congress (SLMC), among other minority parties, have been yearning for a constitutional change to resolve many of their problems for a long time. They have expressed no objection for a New Constitution.

There were and have been other factors. There is no question that making a new constitution or even drafting one is no easy task. Amending a constitution in contrast is relatively easy. The present constitution is quite a rigid one in terms of its amending procedure. It requires a 2/3 majority in Parliament and a referendum, not only for a new constitution, but even for fundamental amendments. This is one reason why the 19th Amendment could not completely overhaul the presidential system. Some who suggest fundamental amendments without going for a referendum are quite oblivious to this fact, among others.

A New Constitution for a New Era

Constitution making process should be completely democratic. There should be no manipulations or hanky-panky. The process should be transparent and accountable to the people. The constitution makers should be frank and open to the public. It is not for the ‘international community’ that a New Constitution should be made, but for the people of this country. A New Constitution should however take the international norms and trends suitable to the country into account. The process of new constitution making can also be quite an educational experience to the public on democracy and good governance, if properly handled and communicated. There are so many advantages in this respect. Sri Lanka can be revolutionized and modernized.

The January change or ‘revolution’ in 2015 has by now encountered so many setbacks, obstacles and disillusionments. A proper New Constitution could undoubtedly rejuvenate this process again and put the democratic process back on track. The existing constitution is a legal hotchpotch. It is obsolete not because it is too old, but because it is not fully democratic from the beginning. It is now with full of contradictions, haphazard amendments enacted back and forth.

A New Constitution could lead to many other progressive changes and pave the way for a sustainable economic development for the benefit of the poor and the middle classes, and not (merely) the rich. It could promulgate justiciable economic and social rights to a great extent. Those are not in the present constitution. A New Constitution could bring our foreign policy into a proper balance without overtly depending on anyone or any power. It should have a chapter on foreign policy. Most importantly, it could end the senseless ethnic conflict and bickering and at least could pave the way for its achievement. For all these to happen, there should be a New Constitution and not patchwork to the obnoxious (Bahubutha) present constitution.

There are some people who are afraid of change by nature. Some may be perennially conservative and lazy to undergo change. This laziness could easily come from the bureaucracy or the public servants and particularly the mandarins in the legal establishment/s. For a new constitution, they have to work hard. Their incompetency may get exposed. Even after a new constitution their responsibilities would become stiffer. That is one group who apparently influencing some Ministers and politicians.

There are others who are afraid of democratic change because they lose power and privileges directly. These are the parasitic politicians. Therefore, patchwork might be their best option. They cannot now completely oppose any kind of change. They now argue therefore for Amendments instead of a New Constitution. This is also the very reason why a new constitution making could not progress after 2000. Even that year, according to some sources, the effort became stalled because the incumbent President wanted to keep her power little longer.

This reluctance to do away with power was the very reason why now infamous Mahinda Rajapaksa didn’t do anything for a new constitution. Otherwise it was promised first in 2005. His easy excuse was the war before 2009. Otherwise, he was a strong critic of the presidential system during his so-called ‘human rights days.’ After the end of the war, he went in the opposite direction enhancing the presidential powers through the 18th Amendment. This is now history. This is however a good lesson for the people and democratic campaigners not to rely too much on any leader, even on Maithripala Sirisena or Ranil Wickremesinghe. They all are dubious mortals! It is always better to rely on principles and policies than people. Even among democratic or human rights campaigners, this is the case. Only we need to give credit when the credit is due, whether it is MR, MS or RW.

Maithripala Sirisena made seemingly an unprecedented sacrifice when he agreed to give away many of his powers when the 19th Amendment was proposed. However, it is not final. Since he has assumed the leadership of the SLFP, his manner seems to have changed slowly. It could be due to the policy differences between the UNP and the SLFP even on the question of a new constitution or constitutional change. It could be something more. The SLFP Ministers now expressing the view that they are against the total abolition of the presidential system. This could be discussed and agreed upon by the main parties. They should come up with a viable and an alternative solution. The UNP also should not be silent on issues. No system could run with dual power for a long period. There can be checks and balances. There is a difference between the two.

If the SLFP is proposing some sort of retention of the presidential system or office, what could be the reason/s? Could it be the fear of change? MS has not yet articulated his views on the matter while he has become quite pronounced on some other matters. The latter is not necessarily a negative thing. In the present setup, there can be checks and balances between the President and the Prime Minister within a healthy framework of mutual cooperation. It could go on the lines of ‘Lichchevi’ policies that RW has been advocating. However, none of these is a reason to abandon a New Constitution and go for some dubious patchwork.

I myself proposed to the Public Representation Committee (PRC) in April last year that the President could be elected like in Ireland, within a parliamentary democracy, and could have functions limited to ‘national security’ and ‘national reconciliation’ only. All other functions should be ceremonial. However, an elected President should resign from party positions to be independent and fair by all parties and all communities. I was not at all thinking about MS, but an elected President in general. Likewise, the Governors of Provinces could be the President’s appointees, on the advice of the PM and in consultation with the Provincial Councils, and they can also be responsible for ‘national security’ and ‘national reconciliation’ on the advice of the President and all other functions strictly being ceremonial.

If the ‘phobia’ for extending or deepening devolution is ‘national security,’ then that could be alleviated under such an arrangement. There is no need to keep an Executive President. What I have proposed is ‘Cooperative Devolution’ where Provincial Councils could exercise enhanced powers or responsibilities under a broad unitary framework while working with the Centre and the National Government in cooperation for the national good.

Undoubtedly, the Centre-Periphery Sub-Committee Report and some other reports have stirred up the hornet’s nest. Some people knowingly or unknowingly describe them as a ‘Constitutional Draft.’ The Steering Committee or the Prime Minister’s office has not cleared up the matter for some reason. They also have not come up with their own Draft. If not a Draft, at least Basic Principles for a New Constitution should be now submitted to the people. Otherwise it may appear that even the promoters of a New Constitution are afraid of a New Constitution.