Sri Lanka: When a Government shrugs its shoulders & turns a blind eye to the violence being perpetrated against its own citizens ..- M.A. Sumanthiran ( MP, TNA)) 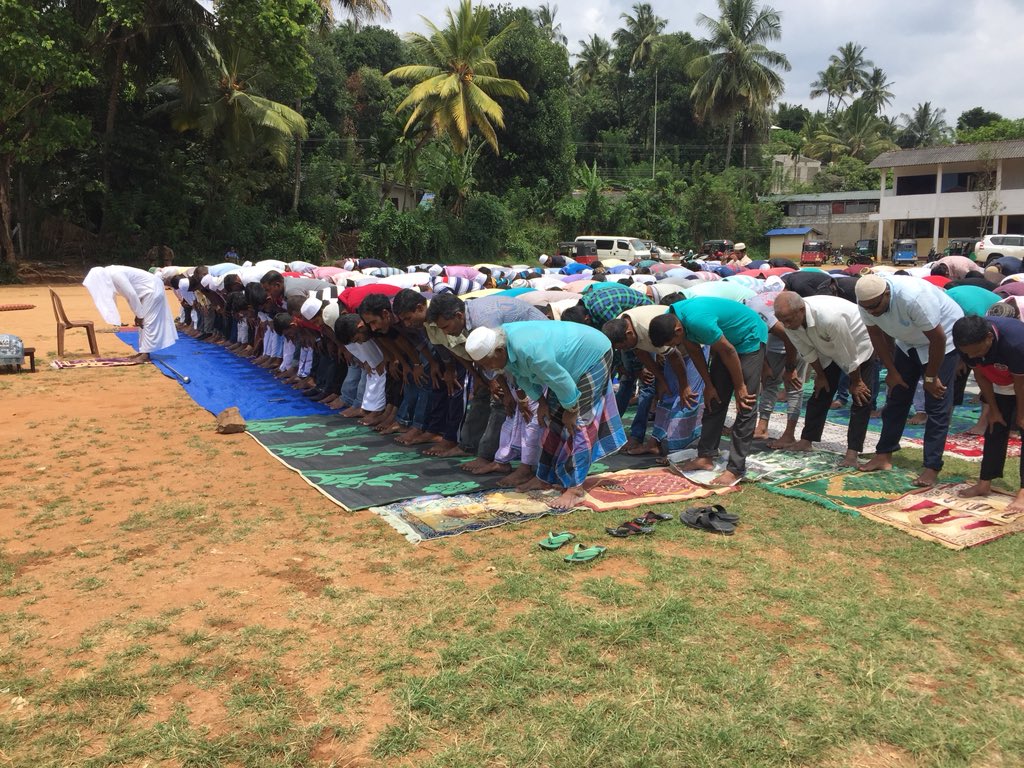 Image: Sri Lanka Muslims in Kandy praying in open space as their Mosque has been set on fire by Sinhala Buddhist mobs.

On March 6 2018, Parliament took up an adjournment motion on the issue of the recent violence taking place in Ampara and later, Digana. Speaking after Minister Rauf Hakeem, I agreed with many of the sentiments the Minister expressed concerning these incidents. However, I did not share the disbelief the Minister professed to feel concerning the incidents. Sadly, such incidents involving violence against an ethnic group that is in a numerical minority are an undeniable part of Sri Lanka’s history.

In another speech in Parliament I described how not once, but twice during my lifetime, the Sri Lankan government arranged for me, along with many other Tamils, to be transported to our place of origin in Jaffna during times when violence was being perpetrated against the Tamil community. Not once, but twice the Government acknowledged to me, and to all the Tamil people, that it could not – or would not – protect us in its own capital. We, who were said to be equal citizens, Sri Lankans, were faced with a Government that was unable – or perhaps unwilling – to be responsible for our physical safety in the capital city of what was said to be our own country.

The similarities between these previous incidents and the present violence are undeniable. The mobs, the burning of homes and shops, and the ever present fear of communities under attack are all too familiar. Perhaps, the starkest similarity however, is also perhaps the most distressing one – the blind eye of law enforcement authorities at the site of the violence.

Among the different sentiments expressed on the violence in Digana and Ampara in Parliament last Tuesday, one thing was clear. Across party lines, there was consensus that a root cause for the violence that erupted was the culture of impunity. In his speech, MP Sampanthan, Leader of the Opposition and the Tamil National Alliance, stated that the role of law enforcement authorities has been called into serious question. He told the House that people seem to have the confidence that they can engage in such acts of violence, and the arm of the law would not reach them, and that the Rule of Law would not be enforced against them.

This culture of impunity is a ticking time bomb, not merely because of the violence it begets, but perhaps, even more importantly, because it forces those victimized by such violence to do the only thing that is left for them to do to survive – to defend themselves.

When a Government shrugs its shoulders and turns a blind eye to the violence being perpetrated against its own citizens; when one is abandoned by the law and authorities merely because of one’s ethnicity, one is forced to defend oneself.

People facing mobs inflicting violence on them, their families and their property cannot be expected to meekly succumb to such violence. People faced with such violence will eventually be forced to defend themselves – violently. The consequences of such a spiral of violence will be unthinkable for a country just now beginning to rebuild itself after a long war spanning three decades.

One hopes that even now, the Government realizes this, and sees the heavy cost of a culture of impunity.

However, just a day after this issue was taken up in the House, on Wednesday March 7, during the debate on the Enforced Disappearances Bill, the Tamil National Alliance was again addressing the issue of impunity. During my speech, while welcoming the effort to enact into Municipal Law an international obligation, I expressed disappointment at the Government bending over backwards in its efforts to reassure perpetrators that they would not be pursued.

Criticizing the fact that the law was not applicable retroactively, the Leader of the Opposition, addressing the Government, stated that if it was not prepared to prosecute such crimes, its position would necessarily be that these were committed with its sanction, explicitly or implicitly. All that the Government does in its attempts to say that this law is only for the future and not the past, is to reassure offenders that they will not be punished.

Numerical minorities, within a political system that denies them the political power that is rightfully theirs, are among the most vulnerable in this country. The Government thus arguably has an even higher moral imperative to ensure that members of such communities are treated as equal citizens before the law, with equal rights and remedies in the law.

As Mahatma Gandhi once said, ‘The true measure of any society can be found in how it treats its most vulnerable members’.

The eyes of the world are measuring us now.