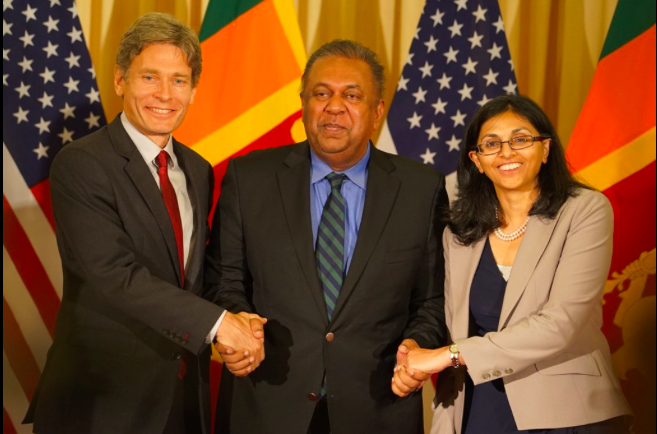 Foreign Minister Samaraweera in his remarks to the media said: “We have seen a series of visits from the United States since January last year. This included the Cabinet-level visits of Secretary of State John Kerry, and Ambassador Samantha Power. These high-level visits, combined with the hard work of Assistant Secretary Biswal and Assistant Secretary Malinowski, and others including our respective Ambassadors in the United States and in Sri Lanka, we have succeeded in consolidating relations between our two countries.”

“It was the result of all this hard work that saw our two countries set up a ‘Partnership Dialogue’ between the United States and Sri Lanka, which met for the first time in Washington DC in February this year,” he said. “At our meeting today, we discussed a range of issues of bilateral importance including economic cooperation; governance, development cooperation, people-to-people ties; and security cooperation. We also discussed matters pertaining to reconciliation in Sri Lanka; as well as international and regional issues and events that impact on our countries.”

“Apart from discussing ways of making our partnership stronger, including enhancing bilateral trade and investment, we also discussed enhancing maritime cooperation and Sri Lanka’s participation in the ‘Our Oceans’ Conference aimed at preservation of Oceans, to be held in September, in Washington DC,” the Foreign Minister said.

“We also discussed the importance of providing an economic peace dividend for the people of Sri Lanka as we progress in the process of reconciliation,” he said.

Addressing the media, the US Assistant Secretary of State for Democracy, Human Rights, and Labor Malinowski praised Sri Lanka for being an example of unity and cohesion, during a time of global upheaval. “The people of Sri Lanka chose a government that seeks to serve all of its people, rather than setting them against each other,“ he said.

He also praised the work of the Sirisena-Wickremesinghe administration and endorsed the establishment of the Office of Missing Persons, the drafting a new Constitution, the ratification of the Convention on Disappearances and the President’s directive on arrests under the Prevention of Torture Act.