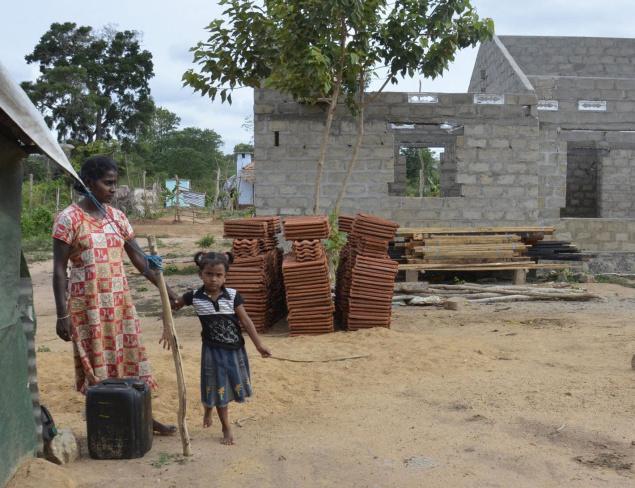 2
Meera Srinivasan
Vasanthakumar Thiruchelvi does not, even for a second, take her eyes off her two children.
Even as she summons her daughter who is jumping over sand and cement heaped around their soon-to-be home, her son threatens to lift the tiles stacked nearby. “Now come here, it might fall on your leg,” she tells her son. “Building a home is a lot of work,” she smiles as she picks up her daughter.
Managing two little children and simultaneously supervising construction of her home is, however, the least of her worries. Thiruchelvi and her husband — like many other families trying to rebuild their homes and lives in the war-ravaged Northern Province — are worried they might soon be caught in a web of debt.
The young couple in Santhapuram village in Kilinochchi is among the beneficiaries of the Indian government-funded housing project in Sri Lanka.
Currently in a temporary shelter-home Thiruchelvi says the new house, coming up right beside, is a boon. Families whose homes were destroyed during the war say they are grateful for the support extended by the Indian government. Returning to their villages, to a home of their own, is a dream come true. But between them and their dream of peaceful life lies the huge challenge of rising material and labour costs that are forcing them to borrow.
Thiruchelvi has signed up for a bank loan of LKR 50,000. “Unless we finish constructing the walls, the next instalment won’t be given. We don’t have enough money to pay the labourers now,” she says. Her husband’s earnings from driving a sand tipper truck is the four-member family’s only source of income.
Explaining the rising costs, Gurusamy Murugaiyah, a community leader in Santhapuram, says: “Masons charge between [LKR] 1,300 and 1,500 these days.” About 350 families in this village are covered by the housing scheme, he says.
After years of trauma and displacement, the homes symbolise a new beginning. But as livelihood options are limited, a financial burden looms large for many families.
To accommodate his entire family, Ramasamy Kumarasamy built an additional room with a bank loan of LKR 2 lakh, and by pawning his wife’s jewellery. “We have repaid some of the debt, but my wife has recently taken up a house maid’s job in Riyadh to ease our financial pressure,” he says.
Even for those who opted for a basic design, borrowing has become inevitable, says S. Suvendaran, who has put in his entire saving of LKR 1,10,000 – money he made from fishing – into this house. “By the time I finish, I will end up borrowing, I am sure.”
It is not just about rising costs. Since the entire construction process is owner driven, it warrants a great degree of involvement in the form of labour, supervision and monitoring. “My husband is a mason, so he chips in every day, but he ends up going late for his work and loses part of his daily wage,” says Satiswaran Gajitha, who is building a home in Palai, Jaffna peninsula. In addition to a bank loan of LKR 1 lakh, she has pawned all her jewellery, which she has little hope of retrieving.
J. Justin Mohan, First Secretary (Development Cooperation) at the Indian Mission in Colombo, whose team has been executing the housing project, says they are aware of the financial stress some families are undergoing.
“Along with our partners, we are trying to extend some personal assistance. We will also be closely monitoring these families to see how best we can help them.”
The situation, Mr. Justice Mohan says, varies from one family to another. “Some families have shown tremendous enterprise and successfully completed the home without any loan, but other families which have more financial pressure may find it hard at times.”
The issue of debt seems common to other housing projects as well. Beneficiaries of the World Bank housing scheme, which covers some parts of northern Sri Lanka, funding about LKR 3 lakh per home, have the same problem.
Sitting in the living room of her incomplete home in Achchuveli, Jaffna, Alliancekumar Subavini says her family is unable to complete the remaining painting work. “I have borrowed about LKR 1.5 lakh. We are unable to pay it and the banker even came home the other day to ask us to pay up,” she says
The Hindu
Share
Facebook
Twitter
WhatsApp
Pinterest
Email