Sri Lanka: We do not need a truth and reconciliation commission 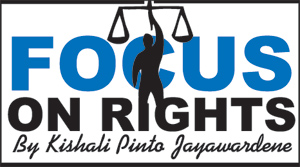 Despite Sri Lanka’s most disgraceful history with a plethora of demonstrably useless Commissions and Committees established by successive Presidents, it is a matter for considerable astonishment that the Rajapaksa Presidency’s near desperate proposal of a Truth and Reconciliation Commission at the turn of this year, appears to have found support in some quarters of our society.

Need to be aware of our past history
One is uncertain whether such support derives from sheer naivete or whether this originates from vastly more complicated motives. Regardless, the outcome remains the same. Certainly it is not difficult to understand the official objective in floating such an idea. Besieged from all sides by increasing pressure towards accountability in regard to gross violations of human rights, the possibility of a South African-styled Truth and Reconciliation would have appeared to be manna from heaven, if one may be permitted to say so. But what occasions surprise is the support that appears to be extended by those who should know better and by those who are fully cognizant of our past history yet appear to blithely disregard such bitter experiences without a second’s thought.

The superficial nature of such engagements is well seen by the general absence of considered critiques into the functioning of Sri Lanka’s Commissions of Inquiry apart from a few exceptions. In other countries such as Guatemala which experienced waves of enforced disappearances and extra judicial executions to a similar extent as Sri Lanka, volumes have been written by academics, lawyers and judges on Guatemala’s Commissions, their positive and negative aspects and their impact on justice delivery. In contrast, Sri Lanka has had a pitifully different experience; commission reports have been written generally in secrecy and their impact has been negligible.

Each Commission effort a waste of public funds
Let it be said quite unequivocally that all of Sri Lanka’s past Commissions have essentially wasted public funds and raised expectations of victims of all ethnicities in the country only to cruelly and summarily dispose of their pleas without redress. Even where Commissions functioned with some degree of integrity as was the case with the three 1994 Commissions of Inquiry into the Involuntary Removal or Disappearances of Persons, their recommendations were disregarded in the main except for the payment of some amounts of compensation to affected persons. Money, it seemed, was the measure of grief. And in that sense, a salutary example was set by some who refused to accept money but cried out for acknowledgement of the deaths of their loved ones by the State. These were Sinhalese victims at that time. Decades later, their cries were eerily echoed by the Tamil ‘disappeared’ during 2009 and even in the post-war years.

Examples set by other Commissions were far worse. Presidential Commissions, including the commissions set up to inquire into the assassinations of Vijaya Kumaratunge, Lalith Athulathmudali and Denzil Kobbekaduwa were noted only for the singularly large numbers of police officers named in these reports against whom disciplinary action had been taken, but who later argued successfully in the then Supreme Court that the sanctions against them should be set aside as they had been reached by an unfair and unjust process.

In more recent times, we have had the 2006 Udalagama Commission to look into war time human rights abuses but which was wound up unceremoniously even before it completed its mandate. Its report remains, we would assume, in the wastepaper bucket in the Presidential Secretariat. And for its own part, the Lessons Learnt and Reconciliation Commission (LLRC, 2010) at least emphasized the deplorable deterioration of the Rule of Law but its ‘hard’ recommendations towards displacing this Government’s majoritarian and exceedingly authoritarian power base have been evidently disregarded. This is nothing to be unduly surprised at, one may well remark.

Not the first ‘Truth Commission’
This is not the first time that we have had a government in power trying to establish a ‘truth commission’ which insults the very name and purpose of such bodies. In fact, we had an ironically styled Presidential Truth Commission on Ethnic Violence under the Presidency of Chandrika Kumaratunga) which was appointed on 23 July 2001 to look into the ethnic violence during 1981 – 1984, with special reference to the period of July 1983, including the circumstances which led to such violence. The Commission was mandated to inquire whether any person, group or institution was directly or indirectly responsible for such violence, the nature and extent of the damage, both physical and mental, suffered by the victims of such ethnic violence and what compensation or solatium should be granted to such victims or to their dependents or heirs.
It was also asked to recommend institutional, administrative and legislative measures to promote national unity and reconciliation among all communities. True to form, this ‘Truth Commission’ delivered its report on September 2002 with little to show for its original grand objectives other than as a useful historical record. It had minimal positive impact on public opinion and was viewed more as a weary account of familiar events rather than a spiritedly motivated investigation that may have acted as a catalyst to bringing about institutional and attitudinal change. No findings of prima facie culpability against any individual/state officer/politician were arrived at and no specific prosecutions were recommended.

Recognising our self serving blindness
At each and every turn, these clever diversion tactics of Commissions and Committee turned attention away from imperative legal and policy reforms, strengthening of the judicial system and restoring the constitutional balance of power which (make no mistake about this) are essential to handling Sri Lanka’s ‘accountability problem’ as is somewhat quaintly termed by some. And Sri Lankan governments, regardless of their political colour, are able to resort to these tactics time and time again and without challenge from this country’s so-called ‘intellectual’ community precisely because of this self serving blindness. Forget about Governments; we should be ashamed of ourselves.
-Sunday Times