Sri Lanka: War is Over but Tensions Run High 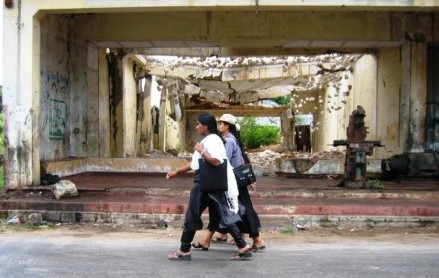 Jaffna, the capital of Sri Lanka’s Northern Province and once the bastion of the Liberation Tigers of Tamil Eelam (LTTE), is once again experiencing unrest.
Violent clashes broke out on November 27, Martyrs’ Day for Tamil, between students of Jaffna University and Sri Lankan security forces. Each year Tamils use Martyrs’ Day to honor friends and family members who were killed in the Sri Lanka Civil War (1983-2009).

The civil war pitted the Tamil militant group, the LTTE (often called the Tamil Tigers), against the Sri Lankan government forces. The conflict was essentially an ethno-political struggle that had its roots in the early years of Sri Lanka’s independence when Sinhalese leaders effectively transformed the country into a Sinhala-Buddhist state through a series of laws such as the controversial Official Language Act No. 33 of 1956, which made Sinhala the official language. The excluded Tamil population protested and demanded a government based on federalism where the Tamils in the east and north of the country would enjoy greater autonomy. When these calls went unheeded for decades, some Tamils formed the Tamil Tigers and began taking up arms against the government in 1983.

The 26-year civil war that ensued, which ended with the LTTE’s military defeat in 2009, would come to claim the lives of between 80,000 and 100,000 people, according to the UN. Some non-governmental organizations like the International Crisis Group say the number of deaths was actually much higher.

Since the LTTE’s defeat, Tamils have observed Martyrs’ Day by quietly “lighting lamps inside their homes.” This year, however, “some Jaffna University students decided to perform the rituals on campus,” E Saravanapavan, Tamil National Alliance (TNA) Member of Parliament (MP) representing Jaffna district told The Diplomat in a phone interview. According to Saravanapavan, this prompted Sri Lankan security forces to forcibly enter the student’s dormitories to prevent them from lighting lamps for Martyrs’ Day.

Tensions have always run high in Jaffna peninsula on Martyrs’ Day. Security forces are put on heightened alert in anticipation of a LTTE attack. These forces equate citizens observing Martyrs’ Day as them showing solidarity with the LTTE militant group. For Tamils, however, it is “a day of mourning, not just for dead LTTE combatants but also for the thousands of civilians, including their kin, who were killed in the war,” Saravanapavan says.

With Tamils determined to properly mourn their dead, and security forces equally determined to stamp out any show of support for the LTTE, it is nearly inevitable that Martyrs’ Day will be marked with some degree of confrontation and tension. What made this year’s Martyrs’ Day more complicated was that it coincided with Karthigai Theepam, a festival when Hindus decorate their homes with lamps.

“Many students lit lamps to celebrate Karthigai but were beaten up” a student of sociology at Jaffna University said. While admitting that he participated in a meeting to observe Martyrs’ Day, he says it was a “peaceful assembly.”

“Why are we not allowed to mourn our dead?” he asks.

The recent unrest is, however, was not just another face-off over Martyrs’ Day. “Tension has been simmering for a while and burst to the fore,” the student said, adding that “Martyrs’ Day simply provided the excuse or the context for the confrontation.”

In the weeks since the showdown, several Tamil youth have been detained on terrorism charges. They include ex-LTTE combatants and students, some of who were arrested for putting up Martyrs’ Day posters.

Events over the past couple of weeks underscore just how fragile the situation in the Northern Province is. It was here that the horrific, final stages of the war were played out. In the past 3 ½ years the guns have been silent but Tamil rage against the state has deepened.

Successive governments, but particularly the present one led by President Mahinda Rajapaksa, have treated the conflict as a “terrorism problem.”  Consequently, their approach has been largely military.

With the military defeat of the LTTE in 2009, the Rajapaksa government has acted as if the conflict is over without addressing the larger issues behind it.

“It has refused to take meaningful steps to address the political issues underlying the conflict, choosing instead a military-development approach,” observes the Jaffna University student. The militarization of the Northern Province has continued unabated since the war has ended. Budgetary allocations to the military have grown and military bases in the North have continued to expand.

The Sri Lankan military is nearly entirely Sinhalese and its brutal operations in the Tamil areas have contributed to it being perceived as an “occupation force.”

Saravanapavan says that the military’s presence in the North has created a pervasive “atmosphere of fear.” People are constantly afraid their family and relatives will be beaten up, arrested, or simply “disappear.”

The military’s presence is everywhere. Colombo administers the Northern Province through a governor who is also a major-general. A March 2012 International Crisis Group (ICG) report drew attention to the military’s domination of the post-war reconstruction effort. With regard to development and humanitarian projects in the North, it is the military that determines “how, where and by whom resources and services are distributed; and who benefits from them,” the ICP report concludes.

Saravanapavan says that the military forces have confiscated hundreds of acres of land from the Tamils in order to build bases. Much of this land is fertile and being used by soldiers to grow crops, he says. Soldiers are running roadside tea shops and food stalls, the Jaffna student pointed out, adding that while their petty businesses are resented by locals, the “more hidden involvement” of the top brass in “big business deals is of greater concern.”

As the ICG report observed:  “The heavy militarization of the [Northern] province, ostensibly designed to protect against the renewal of violent militancy, is in fact deepening the alienation and anger of northern Tamils and threatening sustainable peace.”

Along with the militarization of the north is the ongoing Sinhalization. With the end of the war the land route into the Jaffna peninsula opened and Sinhalese are streaming in from the south and setting up businesses. This is “resented by some Tamils, who feel this is undermining their livelihoods,” Saravanapavan says.

The settling of Sinhalese in the north is inevitably altering the demographics of the province.

There is precedent for this. In the past, the state has sponsored the settlement of Sinhalese in the once dominated Tamil East in order to weaken the Tamil’s clout.

Tamils fear that the government is trying to Sinhalize the north in order to weaken their claims for autonomy and independence. The construction of Buddhist shrines in a place where no Buddhists live — Tamils are mainly Hindu with a sizeable Christian population –  reinforces such fears.

Mullaithivu, which was overwhelmingly Tamil, now has many Sinhalese settlers and could return Sinhalese politicians in the near future,” warns Saravanapavan.

The Rajapaksa government speaks with great pride about the economic initiatives it has put in place in the north. Indeed, the war-ravaged province is desperately in need of infrastructure, jobs and a boost to its economy.

However, much of the “development” has been appropriated by Sinhalese-owned companies or Rajapaksas’s Tamil cronies, according to the Jaffna student. Ordinary Tamils have been excluded from the fruits of the economic development of the north. Infrastructure has improved but roads have been prioritized to facilitate the movement of the military, he points out.

For Tamils in the north, who have borne the brunt of the decades of civil war, the war’s end initially greeted with overwhelming relief.  It promised a new life that was free from aerial bombardment by the Sri Lankan Air Force and forced conscription by the LTTE.

However, while the civil war is over another phase of terror and violence has taken its place.

The recent unrest in Jaffna is not surprising.  It was waiting to happen.  It is not a minor incident that the Rajapaksa government can brush aside. As the BBC’s Charles Haviland put it, the unrest is the “biggest overtly political disturbances in the north” since the end of the war in May 2009.

Deploying more military or using more force to put down the protests will only fuel Tamil discontent.

Dr. Sudha Ramachandran is a political analyst based in Bangalore, India. She writes on South Asian political and security issues.
Diplomat