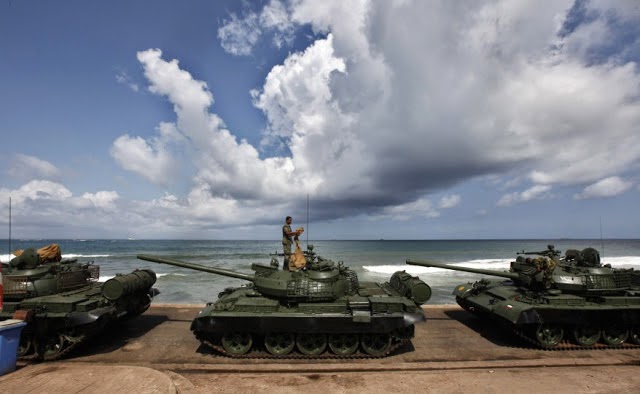 Mullivaikkal – Sri Lanka’s government plans military parades this weekend to celebrate five years since its civil war victory. But the anniversary will go largely unmarked in Mullivaikkal village, where many are too scared to speak of what happened.
The northern village was where Tamil Tiger rebels fought their last stand after 37 years of war, and residents live in fear of the hundreds of soldiers still stationed in the district.
“This is the area where the most number of people were killed,” said fisherman Anthony Nirmalakanthan, aged 31, who returned two years ago to the hamlet on a narrow strip of sand which was shelled in 2009 as government forces moved in.
“The war has ended, but we don’t have peace of mind… the talk of the anniversary is only bringing back the horrible memories,” he said.
The military declared an end to bloodshed when it finally killed Tiger supremo Velupillai Prabhakaran at a lagoon on the edge of the village on 18 May 2009, ending his long campaign for a separate homeland for ethnic minority Tamils.
The United Nations estimates that some 40 000 Tamil civilians were killed in the district that includes Mullivaikkal where they had fled after the government declared it a safe area. The government strongly denies civilians were killed.
Tourist hotspot
Since the war’s end, development has boomed in impoverished Mullaittivu district, 330km northeast of Colombo, as well as other war-ravaged areas.
President Mahinda Rajapakse’s government has built roads and bridges and restored electricity. Banks have opened and broadband Internet is freely available.
The district has also become a popular tourist spot for the majority Sinhalese population. The government has erected memorials dedicated to the military along with a museum with memorabilia seized from the Tigers, who at the height of their power controlled a third of the island’s territory.
One such monument pays tribute to 18 senior army commanders “at the time of conquest”. At the nearby museum, all of the signs and explanations are in Sinhalese, which is not spoken by the mostly Tamil population in the region.
Memorials to the rebels, prevalent during the conflict in Tamil-controlled areas, have been removed.
The Liberation Tigers of Tamil Eelam (LTTE) remains a banned terror organisation, the government said, and public commemorations to them on Sunday are outlawed.
“This victory [in May 2009] belongs to each and every citizen of this country irrespective of any perceived differences,” military spokesperson Ruwan Wanigasooriya said in Colombo last week, announcing the ban.
Hindu priest Sanathana Sharma, aged 23, said Tamils in the district, still traumatised by the loss of loved ones, would be holding prayers and other vigils behind closed doors in the days ahead.
“It is essentially private mourning, private prayers,” Sharma told AFP at his temple in Oddusuddan, a town in Mullaittivu.
Corpses left behind

Almost every family in this district of 112 000 lost relatives in the terrifying final days of the war and most homes were destroyed by the fighting and shelling.

Vathana Baaskari, aged 51, said she relived the trauma of those last days every time she stepped out of her partly built new home.
“Lots of people died here. The dead would be buried only if there was a close surviving family member. A shallow grave was a luxury,” Baaskari told AFP at her home this week. “Otherwise, the corpses were left behind as people fled.”
Baaskari’s 48-year-old husband was hit by shrapnel and died 10 days before the end of the war. “Shells were falling everywhere and we were in make-shift bunkers,” she recalled.
Who fired what and at whom is a long-running dispute in Sri Lanka, but even sketchy official government surveys have found that thousands of civilians remain unaccounted for.
Shyamala Kamalanath, aged 27, remembered taking her wounded mother-in-law to a medical centre only to be told she was already dead. Kamalanath, whose husband was killed in the conflict, said she was lucky to be alive.
“I didn’t realise that I also had been hit by shrapnel,” said Kamalanath, who has a seven-year-old daughter and who now works with a child welfare charity.
“Five of my close family were killed during the final months and at least 25 were wounded,” she told AFP.
Residents who survived the final battle are still angry at Tiger rebels who stopped them from escaping and who used many as human shields. But they are equally angry at the ongoing military presence.
Soldiers in plain clothes tried to block an AFP photographer taking pictures of the village where some homes still have bullet-marked walls and collapsed roofs.

“After you leave, intelligence officers will visit us and want to know what we told you,” a resident told AFP, asking not to be named. “We are always being watched.”