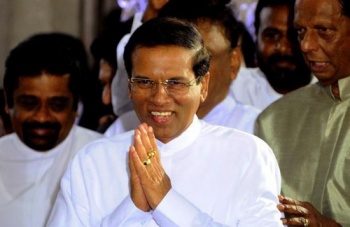 Sri Lanka’s president Maithripala Sirisena, pictured after being sworn in at the Independence Square in Colombo, on Jan 9, 2015. — AFP

COLOMBO: Sri Lanka vowed Wednesday to grant greater autonomy to its Tamil minority in a new constitution after an influential Buddhist monk said the clergy opposed the plan.

President Maithripala Sirisena has said the new constitution will grant extensive autonomy to Tamils concentrated in the island’s northern and eastern regions.

On Tuesday the senior monk Anamaduwe Dhammadassi said the clergy opposed the plan, which would “create unnecessary problems”.

But government spokesman Rajitha Senaratne said the national parliament would not roll back the process which began in April last year to draft a new statute that will be put to a referendum.

“The monks can have their views, but the people’s mandate at two elections in 2015 was to change the constitution,” Senaratne said.

“We will not work against the people’s will just because Buddhist monks want us to do so.”

Nearly 70% of the island’s population is Buddhist and the monks, who hold huge sway, have generally opposed any political concessions to the mostly Hindu Tamils community.

Dhammadassi said senior monks were united in their opposition to constitutional reforms.

The latest move by the Buddhist leadership is seen as a new challenge to Sirisena, also a Buddhist from the Sinhalese majority, who is committed to ethnic unity.

The island’s Tamils took up arms in 1972 claiming they faced discrimination in education and employment.

While many of the grievances were addressed over the years, the militancy grew into a full-fledged guerrilla war with Tamil Tiger rebels controlling a third of the country’s territory before they were eventually crushed in May 2009.

The offensive that defeated the rebels prompted allegations of widespread war crimes, including accusations that at least 40,000 Tamil civilians were killed by government forces.

Sirisena came to power partly on the back of support from Tamils after pledging reconciliation and promising investigations into war-time atrocities. — AFP