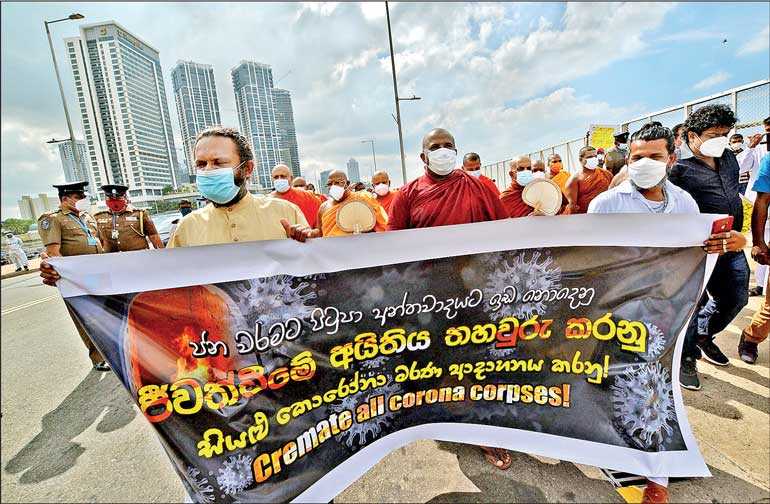 Image: The current controversy over Muslim burial issue has become handy to deflect the growing anti-regime anger. Saner minds from all communities are appealing to the President and his Prime Minister to give up their intransigence and listen to the voice of proven science ( Pic by Shehan Gunasekara)

At first, it was the IMF and World Bank that sent early warnings to Sri Lankan rulers that the economy was heading southward even before COVID-19 entered, and therefore required serious but painful remedies to change direction.

These warnings were ignored amidst the euphoria of landslide victory for Rajapaksas at the Presidential and General Elections. The President coined his fiction, ‘Vistas of Prosperity and Splendour’ (VOPAS), his supporters were ebullient. His economic advisers were confident that the country did not need the IMF’s advice or help to achieve economic growth, and through the President’s ad hoc measures of import controls, tax incentives and a Task Force for Economic Revival and Poverty Eradication headed by one of his siblings, VOPAS would be translated into reality.

Unfortunately, COVID-19 not only killed and debilitated the people but also derailed whatever plans GR had to rehabilitate the sick economy.  Instead of VOPAS, ‘Vistas of Bankruptcy and Misery’ (VOPAM) appears to have become a fact of life for most Sri Lankans.

International assessment of Sri Lanka’s economic status continued to shift from bad to worse. Moody, one of three international credit agencies, downgraded SL’s credit rating from B2 to Caa1. The Central Bank Governor and his team called Moody’s action unfair and even malicious, and tried infusing confidence by promising to fulfil all its international debt obligations without fail. Past record became their evidence to the future by dismissing or undervaluing turbulence of the present.

Soon, Moody’s was followed by the other two rating agencies, Fitch and Citi. They were followed by S&P, the global giant in finance. None of the signals coming from these agencies were taken seriously and their economic incompetence reached a climax when they rejected outright the US Millennium Challenge Corporation investment worth $ 480 million.

MCC withdrawal was more a strategic blunder committed by Sri Lankan negotiators than just a loss of much-needed foreign investment. True, there were some negatives that would have proved harmful to SL’s sovereignty. However, through patient negotiations and tactful compromise those negatives could have been minimised and positives maximised, which, above all, would have helped SL to offset the negative economic sentiments caused worldwide by the rating agencies.

What those agencies did was to warn foreign lenders and investors that SL is not a secure destination for their money and investments. Acceptance of MCC would have dented that view by showing the world that the super power itself had no qualms in investing in the country. Once again, it was political arrogance and not economic rationality that won the day, and MCC has gone elsewhere.

The cumulative effect of all the warnings, rulers’ indifference and blunder have created a new and dangerous reality in the world of business. A couple of weeks ago Letters of Credit (LoC) drawn by the Bank of Ceylon have been rejected in New Zealand, UK and Switzerland. Never before this has happened.

A LoC is a guarantee given by a local bank to the foreign exporter that the payment for export would be received at the due date. The rejection of this LoC is a blow to local importers. They are now forced to pay directly through foreign banks, which is going to be expensive, and as a result there will be serious shortages in local markets that are suffering already from supply constraints.

More than anything else the rejection of LoCs is a virtual declaration by foreigners that Sri Lanka is financially bankrupt. This will have serious repercussion on the value of the rupee. It is destined to depreciate faster, and the Central Bank’s counter measure to sell dollars to rescue the rupee would ultimately reduce foreign reserves and make debt repayment even more difficult. In short, the country’s financial situation is perilously edging towards bankruptcy.

In the meantime, according to a newspaper report, the President’s election manifesto and vision of VOPAS will be part of State employees’ oath to serve the nation when they begin work on 1 January 2021.  Even an oath is now becoming GR-centred, another consequence of his autocratic empowerment through 20th Amendment.

Economic revival no doubt requires capital, labour and advanced but appropriate technology. More than that however, it needs a political and social environment that will be conducive for those factors to work in harmony. Unfortunately, that environment is absent at the moment. The Government seems to be intentionally wanting to maintain a turbulent environment for political reasons.

Besides, the very militaristic approach by this regime to solve civil issues is adding to society’s distress. The regime is therefore desperately looking for an escape route to deflect that discontent, and the current controversy over Muslim burial issue has become handy to deflect the growing anti-regime anger. Saner minds from all communities are appealing to the President and his Prime Minister to give up their intransigence and listen to the voice of proven science.

He has now appointed a committee of 30 experts, which is more an assembly than a committee, to come out with a report. Will these so-called experts think and act on their own or under pressure from the usual supremacist power cartel.