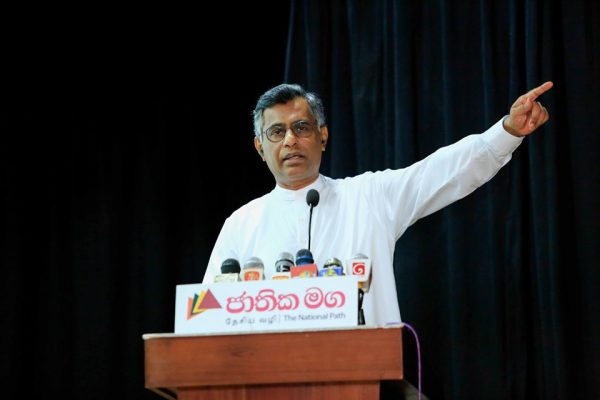 Professing to stand up for party ally MP Patali Champika Ranawaka in the event of any injustice, the United National Party (UNP) today charged that the family of the MP’s former driver were unlawfully detained in the early hours of today (16).

Presenting a united face, a host of parliamentarians representing both sides of the increasingly divided UNP appeared before the media this morning to recount the alleged abduction.

According to the UNP’s version of events, the wife, one-and-a-half-year-old child and mother-in-law of the Jathika Hela Urumaya (JHU) leader’s former driver, who had previously been tried in court for a motor traffic accident four years ago, were allegedly detained in Imaduwa, Galle, around 12.45am today and brought to Colombo in a vehicle bearing the number 64 – 8736. Once in Colombo, the vehicle was parked near Ranawaka’s residence in Battaramulla where, the MPs said, the detainees had been questioned for some time about the former driver presumably in connection with the accident.

MP Ajith P Perera claimed that Attorney-at-Law Shiral Lakthilaka, who was involved in the UNP’s presidential election campaign, had spotted Inspector of Police Ajith Meththananda taking a phone call near the suspected car in Jayanthipura, Battaramulla. Lakthilaka had then called Meththananda who, according to MP Perara, had confirmed that he had indeed brought the driver’s family to that location from Galle on the order of his Officer in Charge (OIC).

“[Lakthilaka] conveyed this information to us, to the Inspector General of Police and to the relevant OIC. The evidence is clear. There’s no need to later claim that [the alleged detainees] came of their own accord, or that they came to see Colombo at 12.45am. This was part of a plan to arrest the driver,” said Perera.

“Abducting a suspect’s wife, young child and mother-in-law to facilitate that suspect’s arrest goes against every law in this country. It’s stone-age law,” he added, noting that neither the driver nor Ranawaka has so far been summoned to a police station for a statement.

“This is not what 6.9 million people voted for. This isn’t rule of law,” he said.

“But we will not be repressed. We will closely monitor the actions of this Government. We will take this fight to the streets,” he said.

Drawing a link between this incident and recent reports of alleged harassment of a number of media practitioners, MP Prof Ashu Marasinghe urged the media to report the news fairly and truthfully.

He also warned of a campaign on the cards targeting one Opposition MP and three Presidents Counsel.

“If you cower in fear in your reporting, that will spell the end of the democracy that was instilled in this country,” he said.

MP Dr Harsha de Silva, meanwhile, noted that the case on the accident had already been decisively concluded in court.

“There is no provision in the law to try somebody twice on a case that’s been concluded. If there is new evidence, they must obtain a court order and reopen the case in an appropriate way,” he said.

“I don’t want to use the word, but it’s almost an abduction of sorts,” he added.

Criticising the way in which the driver’s family was allegedly detained, Dr de Silva said: “It seems the law has been interpreted in a way the new Government wishes to interpret it, which is not acceptable.”

“We’re here to tell the Government in the strongest possible terms that we’re all together in this. And we’re here on behalf of Hon Ranawaka and that we will fight this. The law must be equal to everyone,” he said.