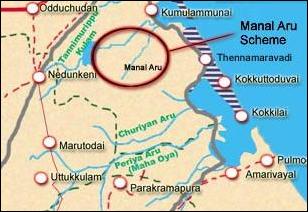 Residents of Thennamaravadi, Kuchchaveli, which is a rural village some 65 kilometres north of Trincomalee, on the Pulmoddai Road, are struggling due to issues pertaining to the lack of land and housing.

Speaking to The Morning, the residents claimed that most of their lands had been grabbed by the Sinhala people.

“Around 225 families stayed in this village and all were Tamils. Only two Sinhalese fishing families were residing in this village before the war. When the war intruded, driving the villagers from their homes and wrecking their lives, one incident in particular caused the flight to Mullaitivu. Seven of the villagers who had taken their cows to graze in the jungle disappeared. They are believed to have been taken to the nearby Army camp. Five family members who went to look for them also went missing. Fearing more trouble, the villagers decided to leave, and as they crossed a river to the other side, they saw flames rising from where their houses stood,” they further claimed.

According to the villagers, more Sinhala people have come to Thennamaravadi from outside and are pretending to be residents without any legal documents.

“There were only two Sinhala families in this village and it has increased to more numbers. They are not the original residents of Thennamaravadi. The sad part is that the Sinhala community grabbed our lands forcibly and no Government official is taking any action against it. About 200 acres are yet to be given back to us. We have deeds and permits but we can’t get our land back. We have complained to the relevant Government authorities and to the Human Rights Commission of Sri Lanka (HRCSL) but there is no solution. The District Secretary says the land is under the Provincial Council but it is actually under the Central Government,” they claimed further.

They said: “We are not even allowed to worship in our Murugan temple next to our village. The Archaeology Department declared it as their site, but this was the place where we worshipped a long time back. Several Buddhist monks came to the site and declared it as a Buddhist temple.”

When contacted, the Thennamaravadi Grama Niladhari (GN) Abdul Hassan said that there is no issue as such according to his knowledge.

However, the Divisional Secretariat of Kuchchaveli confirmed that land grabbing has taken place at the hands of people from Padavi Sri Pura.

“People in the village fled due to the war and when they returned, most of those paddy lands were taken by Sinhala people without any legal documents. Tamil people in the area have the proper documentation and a gazette has also been issued to return the lands.”

According to sources, Government officials are not interfering, fearing ethnic issues.