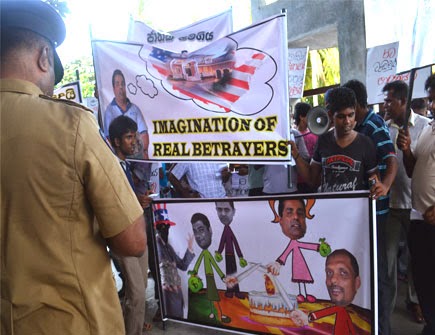 [FMM Media release/ 9th June 2014]
The Free Media Movement (FMM) condemns without any reservations the protest and threatening behavior of the protesters against the journalist’s workshop held at Gold Sands Hotel, Negombo, Gampaha District on 7th June 2014. The protesters, who enjoyed the protection of the Police, had been transported to the Negombo to disrupt the workshop according to eye witnesses.  The FMM states without any hesitation that this so-called protest was state sponsored.  It was a part and parcel of the on going suppression of independent journalism in Sri Lanka.

The three day training workshop on ‘the Investigative reporting on the enforcement of the recommendations made by the Lessons Learnt and Reconciliation Commission (LLRC)’ had been organized for the North- Eastern Tamil medium journalists by the Transparency International Sri Lanka branch.  The workshop started on 6th June and was scheduled to continue till the 8th June.
Around 4 PM the protesters had entered the hotel premises and using a megaphone started to threaten the journalists and trainers as terrorist supporters. The Police, whose duty is to protect citizens rights to association and assembly, took the side of the unruly protesters and advised the organizers and journalists to leave the hotel as soon as possible. The Police promised to provide a safe passage.   That was the only guarantee police could provide, organizers were told. As the darkness descends the participants and trainers had to leave Negambo for a safer area.
The Transparency International Sri Lanka branch made arrangements for the workshop participants to stay the night at the Galadari Hotel, Colombo, some 12 KM away form the workshop venue. But within hours the Galadari Hotel management received threats not to provide accommodations to the Tamil journalist participants of the workshop. In the middle of the night the Hotel Management forced them to leave the premises, on the ground that they could be a security threat!
It is crystal clear that who ever behind the disruption of the media training workshop must be so powerful so that he could order a leading Colombo Hotel to throw out group of journalists in the middle of the night. Only a person who is well placed within the regime with an unquestionable authority could force a leading hotel to do such an illegal and dastardly act.
As stated by the FMM statement dated 28th May 2014 same media workshop had to abandon due to intimidation by the military. The workshop had been scheduled to commence on 23rd May 2014 at the Dear Park Hotel, Girithale Polonnaruwa. Now Deputy Minster Siripala Gamlath, the owner of the hotel has told the Lanka Herald website that it was the Brigadier Ruwan Wanigauriya, the military commander of the Eastern province who pressurised them to stop the workshop.
This is another example of militarization of civilian affairs and total impunity enjoyed by the security forces in Sri Lanka today.
All these developments show that suppression of independent media in Sri Lanka is a well planned strategy and instead of the rule of law it is rule of the jungle that prevails in Sri Lanka. Again and again the Government has failed to carry out any independent investigation on continuing violations of freedom of expression rights in the country.

Once again the FMM calls on the government to initiate a credible investigation on this blatant violation of rights of the journalists and to bring the culprits to book. At the same time the FMM calls on all democratic forces in the country to come forward to safeguard basic freedoms of the people of Sri Lanka, including the freedom of expression rights.