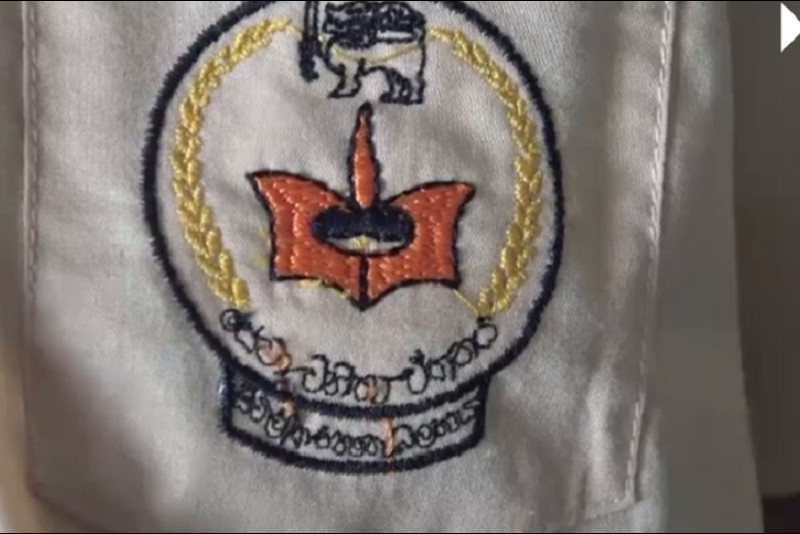 Image: The symbol of Civil Security Division’s Seva Vanitha Unit on the   ‘uniforms’  given to  military run pre-school children in Vanni.

In its Concluding observations on the combined fifth and sixth periodic reports of Sri Lanka United Nations Child Rights Committee  wants the government to ensure that all schools currently run by the military are transferred back under the Ministry of Education. This recommendation comes  under the sub paragraph of reconciliation, truth and justice which fellows:

47. While welcoming the pledges made by the State party during the recent Universal  Periodic Review process, to implement its commitments under the Human Rights Council Resolution 30/1 concerning the truth, justice and reconciliation processes for the violations during the armed conflict, the Committee is concerned about the slow progress in relation  to implementation of such commitments. In particular, it is concerned that:

(a) The number of missing children or persons who were children during the conflict remains high, including children who have surrendered and been sent for rehabilitation, and that the Office of Missing Persons established in 2016 has not yet been operationalized;

(b) Many persons who recruited and used children during the armed conflict continue to enjoy impunity, and paramilitary leaders allegedly responsible for killings, abductions and widespread recruitment of child soldiers, continue to hold public positions.

(a) Strengthen its efforts to operationalize a fully independent Office of Missing Persons with a special attention to addressing cases of individuals who were children at the time of conflict and are still missing; and

(b) Ensure that all persons responsible for recruitment and use of children in the course of the armed conflict are brought to justice. Follow up to the Committee’s previous concluding observations and recommendations on the Optional Protocol on children in armed conflict

49. The Committee recalls its previous recommendation and urges the State party to:

(a) Consider formalizing its commitment not to prosecute children or persons who were children involved in armed conflict ;

(b) Provide psychological support to former child combatants to address the trauma and other mental health issues, and children who have been internally displaced and/or deprived of a family environment owing to violence and/or enforced disappearance;

(c) Ensure that all schools currently run by the military are transferred back under the Ministry of Education;

(d) Ensure that training of the Cadet Corps does not include military activities; and

(e) Consider acceding to the additional protocols to the Geneva Conventions and the Rome Statute of the International Criminal Court.