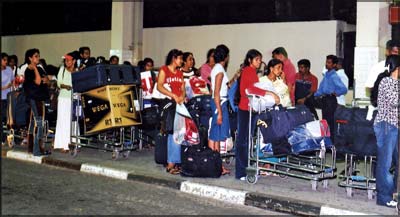 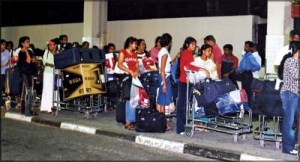 This year’s global theme of, “A promise is a promise: Time for action to end violence against women”, is of particular relevance to women migrant workers who are extremely vulnerable to violence, discrimination and deprivation of their fundamental human rights. With a serious lack of protection mechanisms in place, women domestic workers especially face working conditions akin to slavery including physical and sexual abuse, religious and racial discrimination, lack of freedom of movement, association and expression in host countries and social stigma and unequal economic opportunities at home.

The wrongful execution of Sri Lankan domestic migrant worker Rizana Nafeek on 09 January 2013 who was sentenced to death by a court in the Kingdom of Saudi Arabia at the age of 17 in 2005 was a tragedy which shocked the world. It clearly demonstrates the dangers faced by women domestic workers who are almost completely unprotected by host country laws. Sri Lanka however continues to send women domestic workers to Saudi Arabia without any visible efforts to strengthen protection mechanisms.

Migrant Forum Lanka demands that the GoSL amend legislation to regulate sub agents and impose swift punishment on human traffickers under the Penal Code Amendment (Amendment) Act No 16 of 2006 and widen the definition of trafficking to include dissemination of false information by recruiting agents especially to women domestic workers regarding conditions of and nature of work, remuneration, unlawfully forcing migrant women to sign multiple employment contracts and the commodification of women by offering them financial assistance to entice them to work abroad in potentially abusive conditions.

We urge better collaborative efforts between Sri Lankan foreign employment, labour, immigration, external affairs, other relevant authorities and consular officials to monitor migration flows to address issues of irregular migration and trafficking especially of underage girls, for purposes of prostitution and slavery and to assist women workers who have fled abusive employment situations. GoSL needs to urgently address the situation of Sri Lankan migrant workers in detention camps and prisons across all host countries to prevent any miscarriages of justice and to protect women migrant worker detainees from being subject to physical and sexual abuse.

As one of the few South Asian countries with heavy female migration of women domestic migrant workers, and an economy which is primarily dependent on their remittances, GoSL has both a duty and obligation to protect its women migrant workers. Although Sri Lanka is the only South Asian country to have ratified the International Convention on the Protection of the Rights of All Migrant Workers and Members of their Families, implementation within the country remains ineffective and inadequate.

Migrant Forum Lanka calls upon the government of Sri Lanka to effectively implement the National Labour Migration Policy of 2008 which reflects the law, spirit and essence of the Migrant Workers Convention including reintegration of women into society upon return through providing them equal employment opportunities and addressing the many social issues of female labour migration.

Women domestic workers are one of the most vulnerable groups and face extreme discrimination, violence and violations due to their unique situation. We therefore urge the GoSL to ratify the ILO Convention

Concerning Decent Work for Domestic Workers – C189 – which asserts that countries are required to take adequate measures to respect, promote and realize the fundamental principles and rights at work, such as: freedom of association, right to collective bargaining, minimum wages, the elimination of all forms of forced or compulsory labour, effective abolition of child labour, issuing of standard written contracts and the elimination of discrimination in respect of employment and occupation. Most if not all domestic workers are women, and the ratification and implementation of C189 would act as a deterrent against violation of rights in the country of origin, whilst setting the standards for ‘decent work’ to be negotiated with host country governments.

On this International Women’s Day, Migrant Forum Lanka urges the government of Sri Lanka, the Human Rights Commission of Sri Lanka, Sri Lankan Civil Society to work collectively and with their counterparts in host countries to ensure that Sri Lankan women who migrate for work do so in conditions of safety, respect, freedom, dignity and equity.
07 March 2013