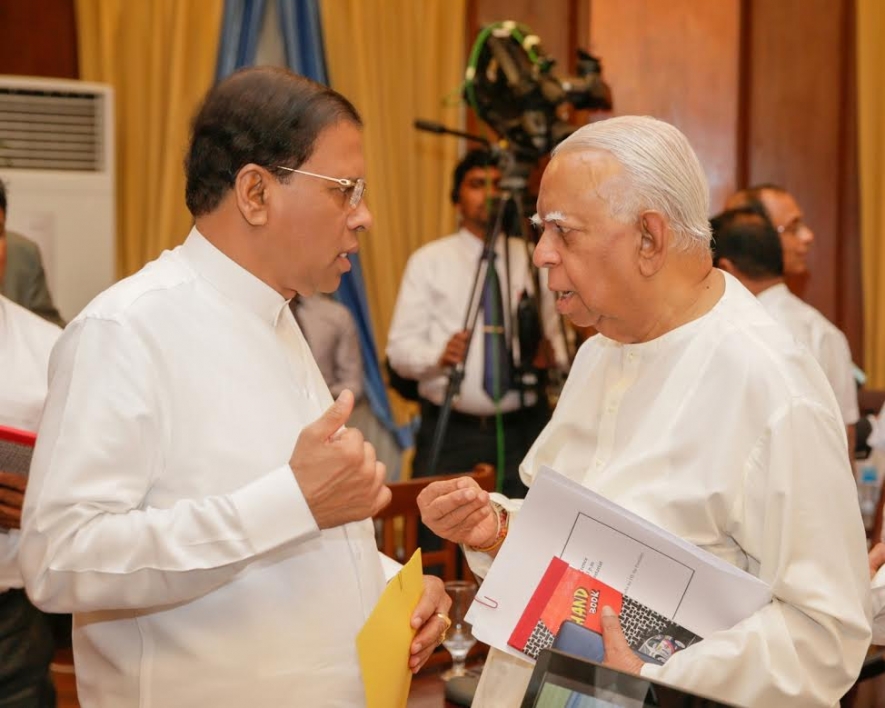 The TNA played a tremendous role in ousting the Rajapaksa regime and establishing the National Unity Government, led by President Maithripala Sirisena and Prime Minister Ranil Wickremesinghe, in January 2015.

Later, with the guidance of R. Sampanthan, the TNA as the main Opposition in Parliament played a responsible role to deal with Tamil political issues as well as voicing on national issues.

Unlike during the separatist war, the TNA’s approach to deal with political and humanitarian issues in the North and East remains non-confrontational.

By learning a bitter lesson in adopting a tough stance in the past, the present TNA leadership is cautious in spearheading its political activities and in the past year, the alliance has proved its commitment to strengthening peace and reconciliation in the island.

The meeting took place a couple of days after Prime Minister Ranil Wickremesinghe submitted the reports of six subcommittees to the Constitutional Assembly. With TNA already making its suggestions to draft the new Constitution, it expects that the longstanding ethnic crisis could be settled in the new Constitution.

Based on the reports of the six subcommittees to the Constitutional Assembly, an interim report is expected to be released in Parliament on 10 December and the report is likely to outline how far the new Constitution would be drafted in favour of fulfilling the political aspirations of the people in the North and East.

The present political atmosphere in the North and East, with several unresolved humanitarian issues such as the prolonged detention of Tamil political prisoners, delays in resettling Internally Displaced Persons, excessive military presence, ignoring investigating into disappearances and alleged war crimes, remain thorny issues for the Tamil National Alliance with civilians affected directly due to the separatist war even expressing their disappointment over the present National Unity Government.

Northern Chief Minister, C.V. Wigneswaran, at his Colombo media briefing last week, even pointed out that the ‘Arise Tamil’ (Eluha Tamil) demonstration held a month ago in Jaffna, was a reflection of the government’s negligence in solving political and humanitarian issues in the North and East.

A mass demonstration was also held last week in Batticaloa against the communal outrage of Ampitiye Sumanaratana Thera of the Mangalaramaya Vihara, Batticaloa.

Despite the negative conditions gradually snowballing in the North and East, the Tamil National Alliance, under the able leadership of R. Sampanthan, is determined to safeguard its commitment to strengthening peace and reconciliation, while averting any confrontational approach with the National Unity Government.

Another meeting between the TNA leadership and President Sirisena and Prime Minister Wickremesinghe is due to take place in a week’s time before the interim report of the Constitutional Assembly is to be released on 10 December.

In the meantime, the government should prepare itself to face the 34th session of the United Nations Human Rights Commission which will evaluate extensively Sri Lanka’s pledges made in October 2015 as co-sponsor to the UNHRC resolution on resolving various issues.

At the 34th session, which is scheduled to take place from 27 February to 24 March, around four reports are expected to be submitted on the findings and the progress made to strengthen peace and reconciliation in the island along with resolving humanitarian issues since Sri Lanka became a co-sponsor to the UNHRC resolution.

Therefore, at this juncture, the government should not underestimate the non-confrontational approach of the TNA and take its stand for granted.

The able leadership of R. Sampanthan, as Leader of the Opposition and as TNA Leader, has given a good opportunity to the government to deal with minority issues in the country. The ball is now in the government’s court!
Editorial, Ceylon Today