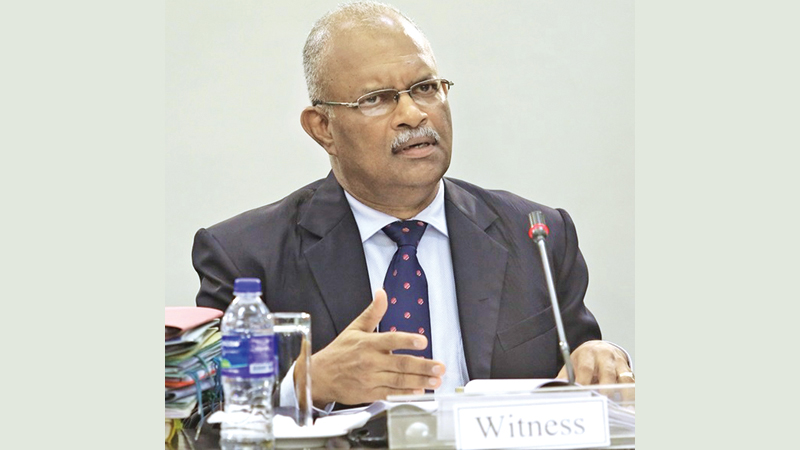 Senior Superintendent of Police Shani Abeysekera, Director of the Criminal Investigation Department told the Parliament Select Committee on the Easter bombings yesterday that extensive investigations into the activities of Zahran Hashim by the CID had led them to Lactowatte, where the haul of explosives found was sufficient to make 25 or more bombs.

“A phone that had been in the possession of a suspect whom we arrested in Mawanella led us to Lactowatte, in Wanathavillu, where we uncovered a massive arms cache which was sufficient to make 25 bombs,” he told the committee yesterday in parliament. “From January this year, we had been on the lookout for Zahran but he could not be found. We could not trace any more phone numbers as the extremists had used apps which erased phone call logs and records.”

Abeysekera also referred to an incident where a bike explosion was reported adding that investigations found that the extremists had been experimenting with a timer. “The bomb which we detected in a van near the Kochikade church was meant to go off an hour after the church blast. If the timer did not trigger the blast, anyone who opened the door could have also triggered it. We were able to detect and conduct a controlled explosion.”

Abeysekera also told the committee that despite heading the CID he was never part of Security council meeting until after the April 21st. “It would have been good if I was part of the meeting, but I was not part of it until after April 21st.”

The SSP was questioned over the failed attempt at Taj Samudra Hotel to which he replied that the CID had gone through the guest list and there were no such special guest as claimed by certain politicians. “It is very clear to us that the bomber tried to detonate the bomb at least twice. He can be seen flicking the switch both times but the bombs failed to go off,” he said. “We are certain that the 8 individuals who are shown in the video are among the dead. We have confirmed so by way of DNA reports.”

When asked if ISIS was responsible for the attack, he said that many days following the attack the ISIS leader had claimed responsibility, yet there are no other indications that the attack was supported by ISIS or led by them.

The CID chief lamented that many politicians, media and even the clergy had faulted him for releasing two individuals who they said later turned out to be the Shangri La bombers. “This is untrue,” he said. “Even last month, these two individuals reported to the police station as they were requested to do so.”

He added that many have leveled various unfounded allegations to the point that it has posed a threat to him and his family. “My children cannot even step out of the home,” he said. “It is unfair for various individuals to level such allegations when I was merely doing my job. The two individuals have been released on strict conditions after being detained for 90 days. Their passports have been impounded and they are to report to the police station every month which they do so.”

He asked the committee to look into complaints of officers being unfairly reprimanded by politicians and clergy and to take corrective action.

Criminal Investigation Department Senior Deputy Inspector General Ravi Seneviratne, testifying yesterday before the Parliament Select Committee probing the Easter attacks has confirmed that, based on the CID’s investigations, the terror attacks were not linked to ISIS but had been inspired by the ISIS ideology.

SDIG Seneviratne also agreed that sufficient action had not been taken despite the availability of sufficient information. When asked to elaborate further on the matter, Seneviratne requested that the media be barred from hearing the testimony.

There were several instances when the SDIG requested to speak exclusively only to the members of the Select Committee on grounds of confidentiality.

Referring to the attempt to denotate a bomb at the Taj Samudra hotel, he added that when the CID reviewed footage of the bomb blast and in particular of the Taj Samudra, he said that it was evident that the bomber tried to detonate the bomb on two occasions while hovering around at the restaurant of the hotel.

Inspector of Police Tharanga Pathirana of the Terrorism Investigation Division (TID) told the Parliamentary Select Committee yesterday that despite repeated requests to Facebook, to take down the page and profile belonging to Zahran Hashim as far back as 2017, no such action was taken until a few days before the April 2st Easter bombings.

“As a law enforcement agency, we wrote to Facebook, and even solicited support from Sri Lanka CERT. We reached out to Facebook many times before mailing a copy of the arrest warrant as well,” he said. “We asked officials at the social networking site, to provide us the IP details of the computer that was used and the email address. We were aware that although Zahran was not to be found he was active on Facebook.” Inspector Pathirana told the Select Committee that 11 days prior to the attack, Zaharan had published another video on his Face Book page and it was just a few days before the bombings that the FB page was finally taken down. “I don’t think they realized the severity of the issue,” he told the committee. “It was on the 12th of April that his page was finally taken down.”