The three most important challenges facing the economy are the containment of the fiscal deficit, lessening the trade deficit and reducing the public debt: especially its foreign debt component. Unless there is significant progress in reducing these, the resultant economic instability would hamper sustained economic growth.

The most important economic objective of the government should be to reduce the fiscal deficit from the current 6.4 percent of GDP to around 5 percent in the next few years. The reduction of the fiscal deficit is essential, as a large deficit has diverse adverse impacts on the economy. Large fiscal deficits generate inflationary pressures, increase the public debt and distort public expenditure priorities.

Fiscal deficits increase the cost of living that lead to strikes with demands for higher wages and industrial unrest. Wage increases add to the costs of production and reduce export competitiveness. The depreciation of the currency to restore export competitiveness would lead to further inflation and increased hardships. Inflation causes severe hardships to lower wage earners pensioners and fixed income earners.

Committed to reduce deficit
In spite of strong official commitment, the government failed to achieve its fiscal deficit target of a 6.2 percent last year. Even the 6.4 percent fiscal deficit was achieved by several expenditures that should have been brought into the government accounts remaining as debts to state banks. 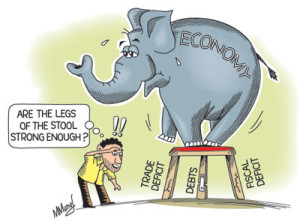 The target to bring down the fiscal deficit to 5.8 percent of GDP this year is difficult to achieve owing to the continuing high government expenditure, high debt servicing costs, losses of public enterprises and declining revenues. It is, however, important to cut government expenditure and reduce losses in public enterprises to achieve a lesser deficit.
One of the disappointing features of recent fiscal performance has been the decline in the revenue to GDP ratio from an already low 14.3 to 13 percent last year. The collection of 15 percent of GDP as revenue should be the objective for this year. In the next few years government revenue should be enhanced to around 20 percent of GDP to achieve a fiscal deficit of 5 percent or less. 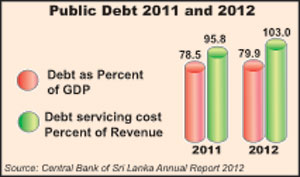 Continuous operational losses at the two key state owned enterprises (SOEs), i.e., the Ceylon Electricity Board (CEB) and the Ceylon Petroleum Corporation (CPC), have led these entities to rely heavily on bank borrowings to cover their losses and to continue operations. While revisions to energy prices are a step in the right direction, measures need to be taken to improve the operational efficiency of these entities and introduce a cost reflective flexible pricing policy to transform these enterprises into commercially viable entities and to reduce pressure on commercial banks, thereby making available more resources to the private sector.”

While agreeing that measures need to be taken to improve the operational efficiency of public enterprises, it is difficult to concede that revisions of energy prices are a step in the right direction. Reforms in the management of these public enterprises should be the priority and should precede price increases. The increase in electricity prices would increase the costs of living and the costs of industrial production.

The foreign debt servicing costs absorbed 16.4 of earnings from exports and services, up from 11.1 percent in 2011.

Trade deficit
The need to reduce the trade deficit is recognised by the Central Bank. “The deficit in the external current account needs to be narrowed to a sustainable level over the medium term. Improved access to international capital markets and a more flexible exchange rate helped cushion the external sector in 2012. However, policies should focus on narrowing the current account deficit to a more sustainable level by reducing import dependence, improving export competitiveness and diversifying goods and services exports as well as markets. Expenditure on the importation of food and beverages could be significantly reduced through policies being taken to encourage domestic production, particularly in the areas of dairy and sugar production.”

The government’s programme of infrastructure development such as roads, bridges and energy generation will contribute to economic development in the long run. However, in consideration of the country’s fiscal constraints, impact on debt, balance of payments difficulties and other priorities, it is important to reconsider the pace and priorities of investment expenditure.

Bottom line
Good governance is essential to achieve the three vital economic goals and to promote an environment that is conducive to higher investment that is needed to spur economic growth. Higher economic growth, achieved by the right composition of output, could in turn lessen the fiscal deficit, reduce the trade gap and decrease public debt.