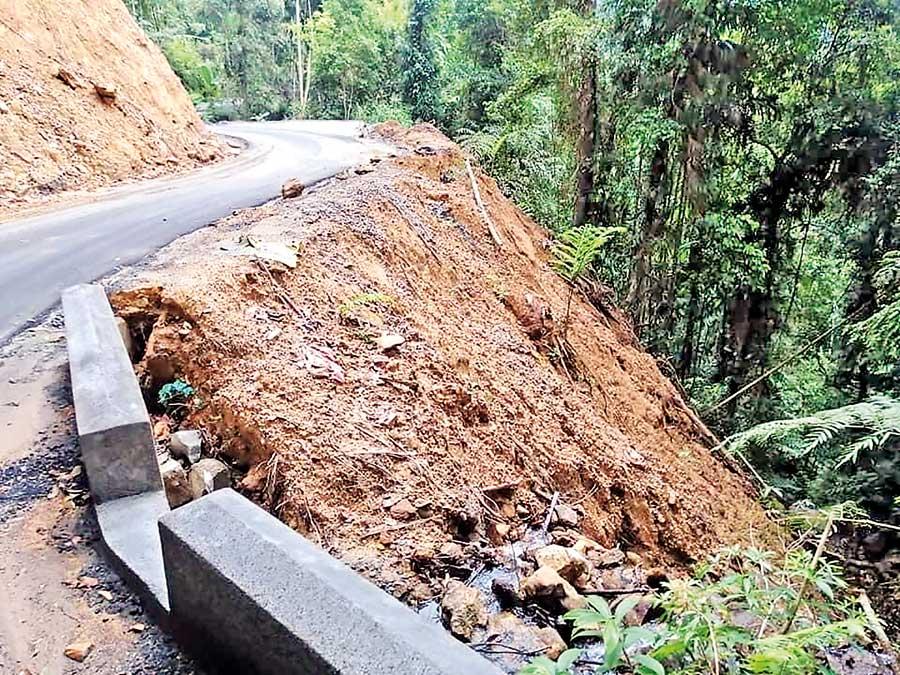 Image: Steep slopes cut on the sides of the road, increasing risk of landslides.

The Neluwa-Lankagama-Deniyaya Road that is being built via the Sinharaja Forest Reserve – a UNESCO World Heritage Site, sans a proper plan and an Environmental Impact Assessment (EIA) has received widespread criticisms.

Responding to mounting criticism at the onset of the project, President Gotabaya Rajapaksa visited the area and said that the road will be constructed in 90 days. Although a part of it is completed, photos of a poorly built road, sans proper drainage systems went viral on social media. However, upon visiting the area, Road Development Minister Johnston Fernando refuted claims and said that the photos are misleading. But environmentalists warn that such haphazard constructions would impose greater damage to the ecosystem as well as people living in the area.

When inquired about the current status of the road, Jayantha Wijesinghe, Convener of Rainforest Protectors Sri Lanka said that there are no retaining walls, culverts, terracing or drainage systems.
“There are steep slopes cut on either side further increasing landslide threats, especially during the rainy season. The soil ultimately gets washed into the Gin River. Fish lay eggs in the soil, but now more mud will get accumulated. There will be many people travelling on this route. Our proposals are about how the traffic could be controlled, what the construction code is, ecotourism aspects and a voluntary resettlement scheme,” said Wijesinghe.

He observes a lack of having done consultation for example the initial Earth preparation work, proper drainage systems etc. “Further renovation work should be done following a proper consultation and supervision by technical bodies such as the Road Development Authority and Irrigation Department,” He added.

According to Ravindra Kariyawasam, National Coordinator at Centre for Environmental Studies, Sinharaja has unique biodiversity because it’s a rainforest and a primary forest. “Primary forest means nobody has destroyed it since its inception. Sri Lanka is one of the 34 biodiversity hotspots in the world. In order to be a biodiversity hotspot Sinharaja provides richness to the status of biodiversity in Sri Lanka. 60% of the forest is endemic. Many other Flora and Fauna including white monkeys were found recently apart from birds, fish, reptiles etc. We haven’t conducted enough research as yet. It is because of the World Heritage Status that tourists, biodiversity secretariat, researchers have paid much attention to Sri Lanka. Sinharaja is protected due to the global influence to protect it. There are no proper boundaries, hunting and other illegal activities take place, people are felling trees and tourist hotels are emerging as ecotourism ventures. Sinharaja is a gene bank and if the World Heritage Status is removed it would make space for increased biopiracy.” warned Kariyawasam.

“There are steep slopes cut on either side further increasing landslide threats, especially during the rainy season. The soil ultimately gets washed into the Gin River. Fish lay eggs in the soil, but now more mud will get accumulated”

Speaking about the road construction, he said that the route spans from Neluwa, Lankagama to Deniyaya. “Around 1.2km lie within the rainforest. Once constructed it would become the main route as many would use it as a shortcut. Thereafter it would improve accessibility for racketeers. The road is being constructed as an access route to the Gin-Nilwala project. This project is being done within a buffer zone. A buffer zone is declared to minimise the damage on the forest. If buffer zones are damaged it will have a direct impact on the entire ecosystem. Although it is legally divided the ecosystem is taken as a whole. So both these projects will double the damage on the ecosystem.” he added.

When asked about the importance of conducting an Environmental Impact Assessment (EIA) Kariyawasam said that an EIA would have assessed whether the road or the ecosystem is more important. “Without conducting an EIA we have initially violated the law. Then according to the FFPO, one cannot construct a road in a sensitive ecosystem when looking at the threat imposed on the environment. Without doing an EIA in a World Heritage Site we are showing the world that we don’t care about it, similarly to what’s happening at the Amazon Forest. In an EIA there are solutions proposed to restore the biodiversity post-construction. What could be done to stop road kills, how could animals move from one side to the other? None of this is mentioned in the plan!” he exclaimed.

When the Daily Mirror contacted the Southern Provincial Road Development Authority an official said that the authority was only involved in constructing the bridge and that the project was done under the supervision of the main office. However, several attempts made to contact the RDA Director General (Covering Up) D. M Dayaratne proved futile.
When contacted Irrigation Department Director General Eng. Nihal Siriwardana said that the department wasn’t involved in the project.

Improvements will be done if required: Army Spokesman

Responding to a query, Army Spokesman Brigadier Chandana Wickramasinghe said that there are attempts to discredit the Army. “We completed the task given to us. But according to the Engineer Brigade Commander, certain areas had issues due to the prevailing monsoon rains. Since around 1.2km of the Road was situated next to the buffer zone they didn’t want to damage the walls within the area. But improvements would be done if required. It was a task given by the RDA and was done under their supervision.” said Brigadier Wickramasinghe.

The matter was also discussed in Parliament on November 25 where Samagi Jana Balawegaya MP Dr Harsha De Silva questioned Environment Minister on the Environment Impact Assessment (EIA) done before constructing the road. “If the road could be constructed in 90 days, why can’t they answer the questions in 90 days?” he questioned. “The EIA should be done before constructing the road and not after,” affirmed Dr De Silva.
In response, subject Minister Mahinda Amaraweerasaid that an EIA and a full report on the project would be produced within three weeks. “The road is being constructed in the interest of the public. The construction is being done without causing any damage to the environment,” the minister said.

Further refuting claims made by Dr De Silva, Minister of Road Development Johnston Fernando said that a new road hasn’t been constructed, but the authorities only renovated the road that has existed for some time. He further said that no damage had been done and no additions had been made to the 1 km stretch of road that runs through the forest patch. He also refuted claims that the road hasn’t been constructed properly and said that in any case a separate Assessment isn’t required for a road that is already there.