Sri Lanka: This not an economic crisis only but a crisis of governance as well -J.C. Weliamuna, PC addresses some burning issues. 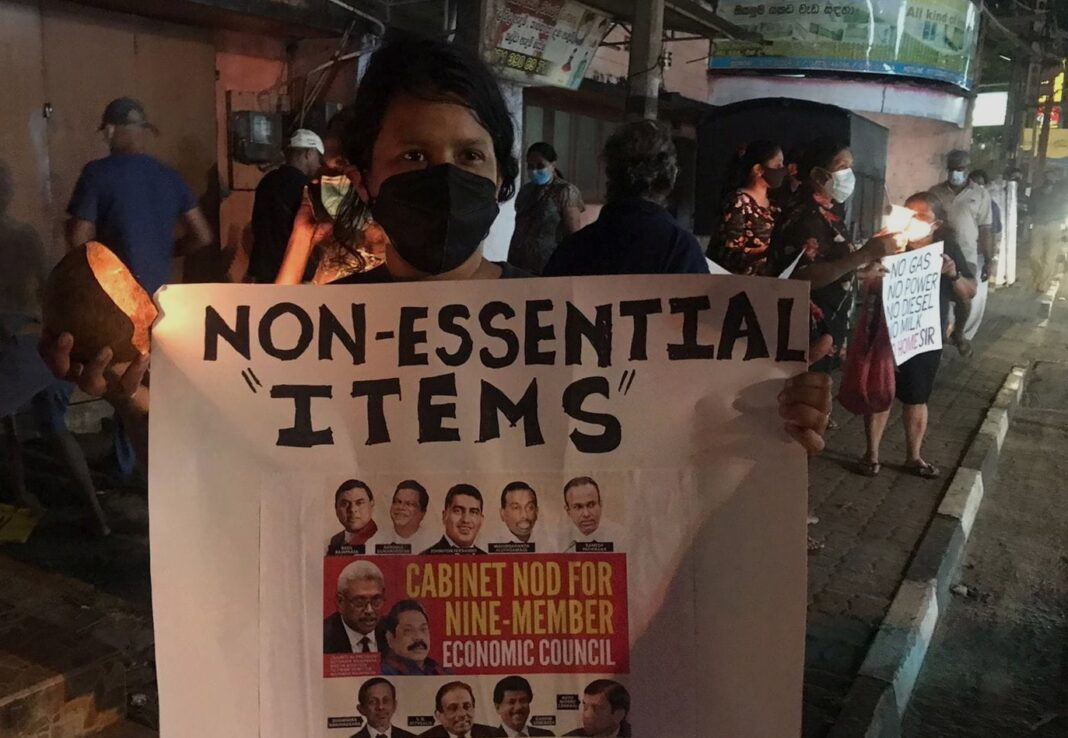 This interview captures some of the key current legal and political issues in Sri Lanka. Weliamuna speaks to the media after almost three years.

A: If the president resigns, the office of the president will fall vacant. Under Art. 40(1)(c) of the Constitution,  the Prime Minister will act for the President during the period between the vacancy and the time the parliament elects a president for the remaining period (of the former president). If the PM is unable to act, then the Speaker will act until that time.

“Much depends on the strength and independence of the institutions.  If the judiciary is strongly independent and the parliament doesn’t become a lackey of the executive, the military government is very unlikely.”

Q: what is the effect of resignation of members of the Cabinet?

Q:  Should there be a Presidential Election to elect a new president immediately?

A: No. The Parliament will elect a “Succeeding President”.

Q: How is a succeeding president elected?

A: Members of Parliament  elect  one of them as the Succeeding President, following the same rules that apply to the Presidential Elections. This happened when President Premadasa was killed in 1993 where the D B Wijethunga was elected by parliament as the succeeding president.

Q: As the President has declared emergency, can the police arrest or detain the protesters under emergency?

Q: Sri Lanka has been ruled under emergency regulations for decades. What is your take on the emergency rule in Sri Lanka?

A: All national security laws were constantly abused in Sri Lanka. It has restricted civil liberties while strengthening misgovernance. I do not think the Emergency Rule has helped the country in the long run. It has made our law enforcement and political elite ruthless and uncivilized. It strengthened the majoritarian ideology, while suppressing the  civil liberties. The legal system  suffered  most  from the emergency rule.

Q: Sri Lanka is going through a turbulent period due to the current economic crisis. Government and people do not want to accept any assistance from World Bank or International Monetary Fund. (IMF). Why do you think Sri Lanka is indisposed towards IMF?

A: I am sure there is more than one reason. Let me be clear that the present crisis is not necessarily an economic crisis only. It is a crisis of governance as well.  I am not sure whether the people do not want to accept assistance from IMF. For decades there has been anti IMP/World Bank campaign at the instigation of a few extremist elements. Most of them were left leaning. I am convinced that their objections are without merit, mainly because they have no understanding how those institutions work or their historic origin. They do not want to accept that both IMF and World Bank Group are within the United Nations System.  Those who promoted anti-IMF or WB sentiments do forget the interplay the global financial system and rules-based world order. If a political authority seeks any kickbacks on account of the loans, IFM  or World Bank is not the place.

“However, there is a section of politically motivated leading Buddhist monks, who have no respect for rule of law or democratic values. Some of them are totally dependent on the government for their perks and benefits. They are never accountable to anyone.”

A: Any military government is unconstitutional and illegal. There is no provision for the military to run the country within the four corners of the law.

Q: Can there be a military government in Sri Lanka?

A: I cannot predict what is unfolding in Sri Lanka.  Sri Lanka has witnessed many unconstitutional decisions taken by the Executive including military. There was no successful military coup d’état in Sri Lanka. I feel that a military government may not be able to sustain its authority for a long term. Sri Lankan courts have previously struck down some of the arbitrary decisions of the political leadership including unconstitutional dissolution of parliament.  Some decisions of the executive were successfully thwarted by parliament. Much depends on the strength and independence of the institutions.  If the judiciary is strongly independent and the parliament doesn’t become a lackey of the executive, the military government is very unlikely.

Q:  Sri Lanka is a Buddhist country. Will the monks support such a military government?

A: I do not know the precise answer. However, there is a section of politically motivated leading Buddhist monks, who have no respect for rule of law or democratic values. Some of them are totally dependent on the government for their perks and benefits. They are never accountable to anyone. They see the military as heroes because, the LTTE was defeated by them.  Unfortunately, an average Buddhist monk does not take a stand on human rights abuses committed by the military. The constitution gives Buddhism the foremost place. The successive governments used Buddhism as a political tool to gain power. There are historical reasons as well. This has resulted in interdependency between power and religion.  I am sure the progressive forward-thinking monks are not happy when the Buddhist temples perpetuate feudal and backward political ideologies that blind the public. A military dictator loves a feudal society that is unaccountable.

Q: There is a report that hospitals were currently running short of medicine and equipment and the Government of India is offering to help. The powerful Government Medical Officers Association had previously objected to the Indian donation of Ambulances and asked patients not to use Indian ambulances.  How far the professionals are responsible for today’s agony in Sri Lanka?

A: Very much. Your point on GMOA demonstrates the depth of the crisis of professionals. They are medical officers who have had their entire education free and sponsored by the general public.  I cannot see any difference between them and an ordinary political party without education. No sensible policymaker should be guided by partisan and unscientific medical professionals of the GMOA. One needs to be careful when someone like GMOA spreads misinformation on the economy, engineering, agriculture, law, international law, history etc. Sri Lanka is better off with sensible individuals with common-sense rather than with an arrogant set of partisan professionals. However there are a quite a number of professionals of par excellence, world class in their respective fields.

“If  the 20the Amendment can be removed  and remove the executive presidency,  it may not give all the answers but it is the most important constitutional answer to gain stability for the country and its prosperity.”

A: Political analysts and economists might have other answers. I am sure the 20th Amendment was one of the major contributory factors to the current situation.  All independent institutions were emasculated. Some of the key governance and human rights gains achieved by Sri Lanka were erased overnight by  the 20th Amendment. Repealing of the 20th amendment can only be done by another Amendment to the constitution. It will be a huge achievement for the country if they can remove the 20the Amendment and remove the executive presidency.  It may not give all the answers but it is the most important constitutional answer to gain stability for the country and its prosperity.

J.C Weliamuna  is  Human Rights and Governance Activist and a President’s Counsel, Lawyer with active practice and specialized in Human Rights and Constitutional Law.
He is former Executive Director and Chairman of Transparency International Sri Lanka,
as well as Former Sri Lankan High Commissioner to Australia. Currently he works as a  Adjunct Professor, University of Canberra.