Sri Lanka: The way northern vote went is also a matter for concern 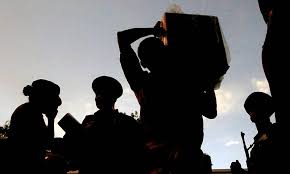 The unexpectedly strong electoral performance by the newly formed SLPP whose chief protagonist is former President Mahinda Rajapaksa at the recent local government elections was a wake-up call to the parties in government. The opposition has argued that the elections, which came a little after the mid-point of the government’s five year term, was akin to a referendum and therefore those in government had lost their mandate to govern. This argument has been countered on the basis that a local government election cannot take the mandate away from a national election. As the pressure on the government has subsided the timing of the election can be said to be a blessing in disguise. It is clear from the election results that if the parties in government had continued in the same manner, they risked being badly defeated at the next general elections in 2020.

Political analysts and public opinion indicate that there were a number of issues that clearly went against the government parties. One of the most significant issues were the cost of living and the feeling of those who are either on fixed incomes or earning their living in agriculture that this government did not care for them. The removal of subsidies, such for school uniforms, the Samurdhi and the fertilizer, cost the government dearly. Also significant was the failure to tackle corruption in high places, and the ironic reversal of roles where those who promised to eradicate corruption came to be accused of it by those so accused. Another significant issue that underlay the criticism of the government was the sense that it was divided and weak with the two parties at loggerheads, which President Maithripala brought to the fore in the election campaign.

The appearance of division within the government is a serious problem that has to be overcome, as it suggests that the government cannot adequately protect the nation interest even as it has faced, and faces, both internal and external threats to its sovereignty. The question is whether the government will give equal priority to dealing with all of these main issues, or whether it will prioritise one or two above the others. The directions already appear to be set. Prime Minister Ranil Wickremesinghe has explained the government’s electoral setbacks as due to its inability to show any stunning economic performance rather than a middling performance. On the other hand, President Sirisena has pledged to address the problem of corruption both outside the government and within it.

It is worth noting that most mainstream analysis has focused on the vote in the south of the country, in the Sinhalese-majority areas. This is in part because the Sinhalese majority constitutes an overwhelming majority and their vote is essential to form any government. It also reflects a mindset in which the ethnic minorities are generally perceived as being peripheral and living on the periphery of national concerns. This is the thinking of a polarized society that continues to ignore the polarization as not being of the highest importance. The lessons of the past three decades are still being learnt. We continue to see only one side of the picture for the most part. Northerners see from a northern perspective and southerners see from a southern perspective.

The marginalization, and neglect, of the politics of the North and East is what led to three decades of war and devastation, and to the economic setbacks suffered by the country as a whole. If there had not been a war, it is likely that Sri Lanka would have been much more economically prosperous than it is today. In 2008, Sri Lanka was counted amongst the 20 most fragile states in the world, out of 176 in which this assessment was made. Some of the indicators that are used to assess whether a state is fragile or not are following: Group Grievance: Existence of tension and violence between groups, which can undermine the state’s provision of security. State legitimacy: Corruption and lack of representativeness undermine the social contract, as citizens lose confidence in state institutions and processes. Factionalised elites: A fragmentation of ruling elites and state institutions along group lines undermines public confidence. Today a decade after that assessment, Sri Lanka has risen to the 47th position in terms of state fragility, out of 176 countries. This continues to be a high warning situation and suggests that the potential for instability continues to remain.

In the local government elections in the North, the TNA suffered significant reversals and lost ground to political parties that accused it of having been co-opted by the government at the expense of the Tamil people. This is because the TNA under its leader R Sampanthan has been playing a very supportive role to the government and trying to get it to deliver benefits to the Tamil people in a cooperative manner rather than through confrontation. This is in contrast to the Tamil parties of the past, including the more nationalist ones today, who have generally criticized and opposed governments, albeit for good reasons, rather than work with them. The relatively poor performance of the TNA is directly connected to the non-delivery of what is most meaningful to the Tamil voters.

Three months ago after the announcement of local government elections the government began to downplay the constitutional reform and transitional justice processes it was engaged in. This was on account of its concern that the opposition would use these issues to mobilize nationalist sentiment against them. Despite the government’s caution, this is precisely what the opposition has done, claiming that Tamil Eelam is being revived by the government in collusion with the TNA and the international community. In the aftermath of the electoral setback suffered by the parties in government, there is concern that the government would put ethnic-related reforms into cold storage until the next national elections are concluded in two years.

On the other hand there are countervailing pressures. The international community appears to be putting pressure on the government to keep its commitments and promises. It was based on those commitments that the government has obtained significant economic benefits and trade concessions, such as the GSP plus. If these benefits are to continue the commitments made need to be kept. The government’s record will be scrutinized soon in Geneva when the UN Human Rights Council takes up the resolution on Sri Lanka that it co-sponsored along with the government in October 2015. There have been calls by foreign governments that Sri Lanka should implement without further delay the Office of Missing Persons and also other institutions such as the Office of Reparations and Truth Commission.

The priority issues for the Tamil people of the North and East are find solutions to the problems they face as a result of the war. These include loss of land and livelihood, loss of family members who are missing and unaccounted for, and the desire to live in a non-militarised area. Underlying these needs is the desire to obtain political rights for which generations of Tamil leaders have fought for, including the LTTE, which they consider to be a supreme sacrifice. Just as much as the government needs to show results that are meaningful to the people in the south, so do those who lead the Tamil people need to show that they are achieving results that are meaningful to the people in the north. It is not possible to insulate political developments in the north from those in the south, and vice versa. The government needs to think holistically when it makes its plans for the future.
–