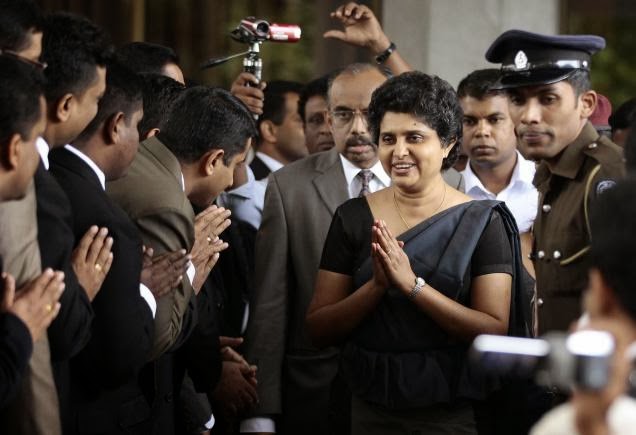 The most astonishing, outrageous and mysterious aspect of the Impeachment proceedings is: How? The entirety of the ‘actual Inquiry proper’ of examining and recording of all the evidence of several witnesses, producing and marking enormous amount of complicated documents, was speedily and hurriedly rushed, in about Five Hours, of one continuous sitting, on the 7th and the deliberation, preparation?
consideration and approval the final Report, was done in just 20 minutes on the 8th of December, [pp 247-252], all within the ‘impossible’ six hours, which would ordinarily take, several months of lengthy hearing and deliberation, but in this case against a “Chief Justice”— it was strangely? – ‘otherwise’,  that is–:

1) a) Examining and recording of the evidence of all the 16 witnesses called,   b] the reading, submitting and marking of more than 1000 pages of various documents, mostly containing complicated financial statements, and more c] the deliberations, determination and finding of guilt, from the bulk of enormous evidence & documents and d] the preparation? consideration and approving of 36 pages of the, ‘highly legal formulation”?, “Final Report”? –this in itself would take several weeks if earnestly and genuinely pursued by each and all the members of the Panel of Inquiry – and
What is amazing, shocking and puzzling is that, what would normally take at least six months, was done within the ‘impossible and incredible’ six hours,? How?  Why? and What for? this impatient hurry? to deny “justice”?  and  these were done,

2) In the absence and without the impeached Lady Chief Justice, her defence counsel and the team, [ex-parte],— in the absence of all four opposition members of the Inquiry panel, who did not resign but only ‘withdrew’ or walked out, and

3) Holding the Inquiry in ‘secrecy’, in camera, under the pretext of the Standing Orders, without permitting anyone to witness the proceedings, shutting out the media, the observers, without openness or transparency, hidden from public view, contrary to all ‘Principles of Natural Justice’, and in spite of protest from the impeached chief justice, who wanted a ‘public hearing’, but was carried on nonetheless in a “conspiratorial manner“? taking undue and unfair advantage and opportunity of the absence of the defence and the said four members, and

4) Without showing, consulting, getting the endorsement or dissent or comment or signatures of the said four legitimate opposition members of the panel, totally and arbitrarily ignoring or disregarding and unlawfully? excluding them, from approving or rejecting the questionable ? “Final Report”, before sending it to the Speaker,  the brother of the President.  and

5) Despite the objection to’ Bias’ on the part of two specific government members of the panel, against the Chief Justice, both for having been given judgments against their interests in the Supreme Court and one’ for additionally issuing statements to the media and elsewhere manifestly critical of her and both with others insulting, abusing and behaving in an adverse and hostile manner towards her in the early stages of the impeachment process and before, and

6) Despite the objection to the absence of a definite laid down procedure, in advance, not specifying the mechanism, process, the procedures for the inquiry, of producing or marking the documents, listing of witnesses, regarding proof, etc   but instead, acting in an arbitrary and ad hoc manner, and unreasonably insisting on the defence to ‘Begin’, ‘Prove the innocence’ and ‘Disprove the charges’, etc and


7) Despite the protest for the refusal to grant reasonable time to the Defence to prepare a] a full and comprehensive Statement of Defence to the 14 haphazardly drafted charges & later b] to prepare for the inquiry, fixed for the very next day, with 1000 pages of documents being provided, in bulk, the last moment and without providing the relevant wanted documents or witnesses sought for, and

8) After misleading the defence, that there would be no witnesses called, ‘compelling’ them to withdraw and after the four panel members also withdrew the next day, and even without their prior knowledge, immediately, suddenly and cheekily called 16 witnesses from ‘nowhere’? without listing, noticing or summoning them, proceeded to record the evidence of all of them, the same night, in a casual manner?, without any cross examination, in about, five continuous hours, and

9) Contrary to the fixed agenda to be followed ie a) Discussion on the papers and documents marked? b] Discussion on ‘the defence statement’, ie the answer, both of which never took place? No Discussions whatsoever on the documents or the answer, but instead  the documents and the evidence, were hurriedly, marked and recorded, without any discussions, and the 3rd agenda never arose ,ie hearing of the CJ ,as she walked out,  and

10) Despite both Superior Courts directives or requests, to suspend the sitting of the Panel of Inquiry, pending the courts deliberation, the seven Government members of the inquiry panel, despite the protest from the other four members, nevertheless ignored, disregarded and defied the Courts directive and rushed in speedily, concluding the Inquiry, hastily and hurriedly in just ‘six hours’, and found the’ Chief Justice’ “Guilty” and

12) Many of the rulings to the objections raised by the defence were ‘arbitrarily’ made without consulting the four opposition members of the Panel of Inquiry.  Many more such irregularities and unfair treatment were meted out to the defence.

It is pertinent to point out that, in fact, the complainants, ‘prosecution’ (leading of evidence) and the ‘Judges’ were one and the same side, ie the government group?

The evidence led ex-parte, were not reliable or dependable as they were not subject to scrutiny or cross examination and one main witness had a ‘grudge’? towards the CJ in the same matter and her evidence was thus suspect or biased.

The impeached CJ and the defence team were compelled to withdraw, followed by the four opposition members, the next day] due to prejudice, arbitrariness, unfairness, and bias of the ‘obstinate determined majority’ in the panel of inquiry. The panel refused to reconsider and accommodate the defence, to ensure fairness.

The entire episode was like a mafia style, stunning ‘daylight robbery’ of justice.  Did the entire panel discuss, deliberate, prepare and adequately consider the Report? When and Where? if not Why?  Was there an outside hand or someone else? involved, participating or manipulating? and also preparing the Final Report? Note, the “Report” cited five House of Lords judgments and the Halsbury Report. How many, in the Panel of Seven would have contributed or appreciated-“these”?

On 1/1/2013 the Supreme Court gave its ORDER that it is mandatory for Parliament to enact laws under art.107(3) of the Constitution, Re. Procedure of conducting Inquiry etc, (instead of acting on 78 of the Standing Orders),

On 7/1/13 the Court of Appeal, issued a ‘writ of Certiorari’ Quashing the findings of the Select Committee, as unlawful etc?  The Attorney General’s petition of appeal to set aside the ‘Writ’ is before the “Supreme Court” for determination.? Why-Now??

The “Seven Member Panel”? that inquired, determined and found her guilty, comprised exclusively and entirely the Ministers of the Government (one sided). No sooner the four opposition members walked out, the rest of the panel, without any hesitation or reservation, being unconcerned and unperturbed and without adjourning or accommodating the said four, immediately, suddenly, and happily took the undue advantage and opportunity to exploit the rare situation, and rushed to hastily conclude, recording the evidence, in a nonstop five hour, the same night.

The Impeachment proceedings are ‘available’? in Two Volumes of 1575 pages.

Why was the Government in such a panicky hurry to somehow finish the ‘Inquiry’ on the 8th of December 2012, [when there was still time, till 12th ?] and when the entire panel had unanimously agreed and decided to move for an extension by another month, till 14 of January 2013. There is a Mystery behind these episodes.

The Samarakoon CJ Impeachment proceeding of 1984, took six months, this was after the ‘admission of the facts in the only one charge’ but in this case it was all otherwise and different, prematurely concluded, ‘in just SIX HOURS’ in spite of the bulk of ‘questionable’? documents and evidence.
Was the ‘Panel of seven’ properly and validly constituted after the withdrawal of the four opposition members? Has the ‘panel of seven’ any right to arbitrarily hear and determine only a few charges? Shelving indefinitely the others, contrary to the “Mandate”, without getting the prior ‘approval’ of the Speaker and Parliament.

It is obvious that everything was predetermined and a foregone conclusion and the ‘Inquiry’ was a mere formality, a farce, a pretention to justify, to somehow ‘Remove’ and to be Replaced by another— acceptable one, obedient and obliging.

It is against all Principles of Natural Justice, Fair Trial, Openness and Transparency
It was Misuse or Abuse of the legal & constitutional process to justify the Removal.
To legitimize the illegitimate or ‘ illegitimize’ the legitimate, is arrogant perversity

Only a vigilant, vibrant, robust and an activated independent BAR can give strength, support and confidence to the Judiciary to act independently and without fear or favour. The BAR Association must ensure this. Only a Chief Justice appointed through an acceptable ‘general consensus’ can infuse confidence of the BAR, the Judiciary and the public. The subsequent “arbitrary style” appointments to the higher  judiciary, contrary to accepted norms, has dented the ‘confidence’ in the judiciary. The judiciary and the justice system is now at stake and vulnerable?

It is unfortunate that there was no ‘Dissenting Report’ by the ‘Four Members’, nor a report? by the defence team and most unfortunately the opposition alternative political leadership has not created or provided the necessary ‘political and democratic space’, cover or environment for the lawyers and civil rights movements to continue to  agitate and ‘fight for justice’ without fear of threat or consequence.
If this can happen to ‘a Lady Chief Justice’, what is the fate of others? What could have happened to thousands of ‘others’ in the past? ie, Disappearances etc. The plight of the ex- ‘Army General’ in the Court Martial Inquiry is another reminder. If this is the precedent and norm, Can we expect any ‘justice’ from the state? It is for the BAR and the Lawyer Fraternity to decide, What next? Conform or Resist.  The ‘Legal Profession’ itself will soon become ‘irrelevant’, pleading and not arguing.
The ‘past’ cannot be forgotten, the ‘future’ cannot be ‘forsaken’, ‘Today’ is not everything, expediency cannot substitute ‘Reality’, ‘Future’ is our Hope; in Justice.

There are ominous ‘signs’ of an impending disaster; patronage and protection to drug dealers, criminals and murderers? the police and the AG is helpless & helpful.

The ‘voice’ of dissent, the dissident culture, must assert in the midst of ‘repression’.

Now or Never, tomorrow is too late,-success or failure? let us do our best. We cannot be ‘accomplice’ to ‘Injustice’, either shamefully submit or defiantly resist.  Even a subdued, silent, invisible and sustained continued effort will serve the need.

The Impeachment outcome was referred by the Secretary General of the Commonwealth to two- 3rd Umpires-? South African ex-Chief Justice, Pius LANGA and Sir Jeffry Jowell, QC and both declared- the ‘Chief Justice’-  “NOT OUT”.

Can there be an Independent ‘Judicial Review’ on the ‘Findings and the Removal’?

Was the “Chief Justice” guilty of a serious and “proved misbehaviour”?


This brief account deals exclusively on the-“Six hours Inquiry only’ and not other aspects, ie. Findings, which needs a separate attention. There will soon be a panel discussion by experts and eminent jurists and broadly by the members of the BAR.