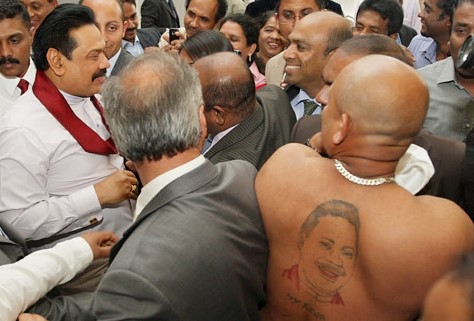 “Have you learned nothing from history?” – Freud (The Future of an Illusion)

This day, 27 years ago, Sri Lanka was burning.

The opening up of the economy in 1977 had caused a massive surge in growth and employment and income generation. Like with every such radical transformation, it had also resulted in huge socio-economic dislocations. By the early 1980s inflation was skyrocketing and economic inequality has reached alarming levels. Faced with growing discontent in the Sinhala South, the government adopted the time-tested method of scapegoating the minorities.

Blaming Tamil businesses for Sinhala poverty and Tamil professionals for Sinhala unemployment was not limited to rank racists such as Cyril Mathew. Even relative moderates like Ronnie de Mel saw a use value in racism. “The Tamils have dominated the commanding heights of everything good in Sri Lanka,” the then Finance Minister opined in the immediate aftermath of Black July. The solution was to “restore the rights of the Sinhala majority” (The wages of envy – The Economist – 20.8.1983).

In the eyes of its perpetrators and defenders, Black July was a necessary measure of political chastisement and socio-economic recalibration. For many a Sinhala supremacist, it epitomised the ideal Sri Lanka, a land where even the most poorest and marginalised Sinhalese was more potent than the richest, the most highly placed non-Sinhalese. The same mindset was evident in the attacks against Christian churches in the early 2000s and in the recent mini-riots targeting Muslims.

So long as people who subscribe to such thinking are confined to the political and societal fringe, the harm they can do is limited. But if they enter the mainstream, then violence and instability become the norm.

Today, those who believe in the corrective capacity of anti-minority violence are not just in the mainstream; they are vocal and active in the corridors of power. The Rajapaksas may or may not believe in the racist ravings of their more extremist supporters. But (like S.W.R.D. Bandaranaike, Sirima Bandaranaike and J.R. Jayewardene) they have no compunctions about using the resultant hysteria for their benefit. After all, the Gotabaya-Mahinda government even tried to turn a global pandemic into a Muslim problem – and did succeed for a while.

A country that is forever mired in some sort of majority-minority conflict can never know peace, never be stable, never prosper. Black July was both an outbreak of barbarism and of stupidity. It was destructive and self-destructive. Developing a way of existence with the minorities based on tolerance and justice is in the interests of the majority community as well. That is a basic lesson of Black July and its aftermath, a lesson the Rajapaksas are ideologically incapable of learning.

A sin of omission

The Sirisena-Wickremesinghe administration failed to counter racism. Theirs was a sin of omission. With the Rajapaksas, racism is a weapon of choice, to be used tactically or strategically depending on the need. And the need would grow, as the economic crisis worsens, heaping hardships not just on the Sinhala poor but also the middle class.

If the Gotabaya-Mahinda combo succeed in gaining a massive majority at the upcoming parliamentary election, Sri Lanka’s future maybe akin to the worst of her past – including mob-violence and economic collapse. How can there be peace or stability, if the guiding ideology of the state sees a potential enemy in every non-Sinhala-Buddhist?

Before Black July came another incident of monumental stupidity and criminality that cast a long shadow over Sri Lanka – the referendum of 1982.

Knowing that the new PR system would deprive it of the two-thirds majority it gained in 1977, the J.R. Jayewardene administration decided to evade a parliamentary election via a referendum. The government won the referendum and retained its absolute power, but only at the cost of undermining the system.

Had the Jayewardene government not been obsessed by the two-thirds mania, had the referendum of 1982 not been held, had there been a normal parliamentary election in 1983, Sri Lanka, and Sri Lankans, would be in a different – and in all probability a better – place today. But the pursuit of absolute power generates absolute stupidity, even in men of undoubted intelligence like J.R. Jayewardene.

Today we are at a similar inflection point.

What will the SLPP do with a two-thirds majority? Abolish the 19th Amendment for starters. What would that mean in practical terms, for the country, for the people?

Lethal violence was the norm in Lankan elections until the 19th Amendment instituted an independent election commission. Since then, three elections were held, without a single loss of life. This is the fourth election, and so far, no one has been killed or seriously injured. And when the SLPP candidate for Puttalam Sanath Nishantha led a vehicle parade riding a number-plate-less motorbike sans a helmet, it became news because such open violation of election laws is now an anomaly rather than the norm.

Those who yearn to abolish the 19th Amendment intend to return to a past when elections were fought not like peaceful contests but like mini-wars. Is that the future we want?

In 2014, when the then President gathered his kith and kin to celebrate Sinhala Avurudu in Medamulana, the attendees included Chief Justice Mohan Peiris (http://www.adaderana.lk/news.php?mode=head&nid=1829). Peiris had been handpicked by the Rajapaksa brothers to head the Supreme Court after they hounded out chief justice Shirani Bandaranayake via an illegal impeachment. Rewarded for his obedience, Peiris wore his subservience to the Rajapaksas like a mantle of honour.

The 19th Amendment restored judicial independence to a great degree. That democratic pillar is not completely dead yet. For instance, this month, the Court of Appeal struck down the illegal decision by the Gotabaya-Mahinda cabinet to abolish permit requirements for sand transportation. The abolition of permit requirement had played havoc with the environment, and as the AG’s Department admitted to the court, it was done in violation of the Mines and Minerals Act.

Had the 19th Amendment not been in place, the government could have got away with this illegal and destructive decision. Is that the past we want to return to?

This month, an archaeological site in Kurunegala was destroyed, allegedly on the orders of the SLPP mayor of the city. The Rajapaksas are protecting alleged culprit. Mahinda Rajapaksa tried to use racism to justify this act of vandalism, saying that King Buvanekabahu II had a Muslim wife. When Gotabaya Rajapaksa was asked about it while on the campaign trail, he dismissed the incident with his signature laugh and a few incoherent words. The cabinet did not discuss the matter, and the police is yet to make a move against the alleged culprit, even though the expert committee appointed by Mahinda Rajapaksa recommended that the perpetrators be punished.

This incident clearly demonstrates what the future will hold if Gotabaya-Mahinda combo wins a massive majority. Such empowerment will give a free rein not just to the ruling siblings and their family but also to their supporters, including the worst of them. Crime and abuse by the rulers and their acolytes will become the norm again, as the police watch helplessly from the sidelines.

Is that the country we want to return to?

The Rajapaksa supporters hint that a two-thirds majority for their masters will strengthen Sinhala dominance and keep the minorities in place. An overly empowered Rajapaksa government will indeed make minority lives more insecure, precarious even. But the same violence will be unleashed on the majority community, the moment they step out of line, as the Rathupaswala example demonstrates.

When the killing (of three Sinhala people) in Rathupaswala was over, a villager asked a soldier why he did not use rubber-bullets. The soldier replied, “We can’t mollycoddle people with rubber bullets” (The Sunday Times – 11.8.2013). It was no accident that the Rajapaksa regime sent the 58th Division – implicated in the White Flag incident – to teach the Sinhala people of Rathupaswala a lesson in obedience. Add to it the fact that Brigadier Deshapriya Gunawardana, the commanding officer accused of ordering soldiers to shoot at the unarmed protestors, was promoted to the rank of major general by President Gotabaya Rajapaksa and the message is clear – a massive majority for the Rajapaksas will boomerang on the Sinhalese someday.

A Chinese firm has reportedly been awarded the contract to develop a smart card system for Sri Lanka Railways (http://www.newswire.lk/2020/07/25/china-secures-deal-for-sri-lanka-railway-smart-card-system/).

This in a country with a superlative information and communication service industry.

According to the government’s own Export Development Board website, ICT services have become the fourth largest export earner in Sri Lanka. “Sri Lankan ICT metal is behind the innovations that power international stock markets, telecommunication and transportation systems in Europe and the UK… Sri Lanka is emerging as a world’s ICT destination of choice. The island is steadily transforming itself into the most preferred ICT hub in Asia thanks to the availability of the most precious resource in the world – talent.”

Clearly our globally recognised talent is not good enough for the Gotabaya-Mahinda government. So we are getting a Chinese company to provide ICT services to our railways. So much for Gotabaya Rajapaksa’s much hyped fidelity to meritocracy and technocracy.

According to the EDB website, our ICT sector employed more than 85,000 people by 2017. At a time when the economy is tanking and unemployment is rising, giving the railway contract to a fully competent Lankan firm would have made even more economic sense than usual. Yet the Rajapaksas have reportedly not done it. Was it because of our growing financial dependency on China?

The government is trying to get out of paying frontline health workers their entitlements using the lack of money as an excuse. The same government has money enough to engage in ventures that can only be called insane, such as a research project undertaken by the Civil Aviation Authority – The King Ravana and Lost Heritage of Aviation Dominance (http://www.sundaytimes.lk/article/1122522/caaslto-conduct-research-on-king-ravana-lost-heritage-of-aviation-dominance). It is perhaps no accident that the current chairman of the CAA was once President Gotabaya’s travel agent.

[alert type=”success or warning or info or danger”]There cannot be much doubt that if elected with a huge majority, Gotabaya-Mahinda combo will resurrect other wasteful projects such as the Homagama Cricket stadium (26 acres, 60,000 spectators, 30 to 40 million dollars) and give the main contract to another Chinese firm. After all who but the Chinese would lend us colossal amounts of money for such wasteful projects?[/alert]

If the Rajapaksas gain the power of their dreams, political irrationality will be compounded by economic irrationality. As the economic malaise worsens and the political discontent increases in consequence, the government’s usage of ethno-religious racism as a weapon of subjugation and control will grow. A new vicious cycle of violence and counter-violence will be born, destroying all prospects of peace, stability and development, as happened in the Lost Decade of 1980s.

Will we opt for that past on 5 August?