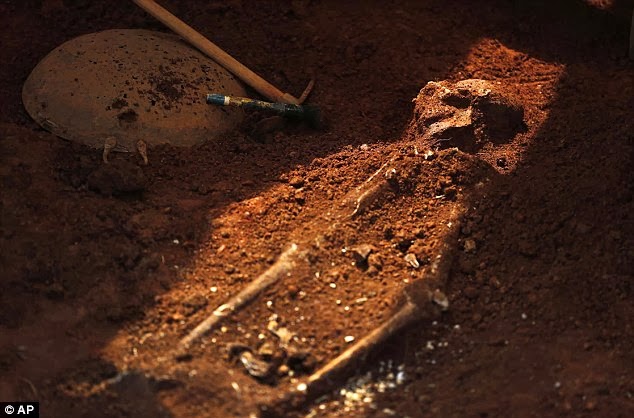 A mass grave has been found at Thiruketiswaram, Mannar in January 2014. In 2013 a mass grave was also found at Matale and the investigations are still at early stages regarding the body parts found in this grave. The general condition prevailing, relating to both of these mass graves is that the investigations are not being conducted in terms of modern forensic methodologies which are essential for the proper preservation of the findings as well as the prevention of the destruction of the materials found in the mass graves in the course of excavation. Both at Mannar and Matale the mass graves were dug with bulldozers and naturally such manner of excavation is not conducive to proper handling of the human material remains that are found in such graves.
There are no guidelines that have been adopted for proper conduct of excavations, for the preservation of the findings as well as for proper conduct of investigations for the determination of the times at which the burials had taken place and other material elements which are needed for proper identification of the remains of persons which will enable the administration of justice relating to the persons whose remains are found in these mass graves.

At the mass grave in Matale the remains of over 150 persons were discovered. The crucial issue which came up was regarding the timing of the deaths and burials of the persons found in this grave. Initial inquiries conducted by Sri Lankan forensic archaeologist who examined the site said that it was not due to epidemic or any natural causes and a parallel investigation done by a Judicial Medical Officer said that it was not a regular burial site and both concluded that remains belonged to the period 1986-1990.

(JVP) and the Sri Lankan government. Later, after a change of government several commissions regarding involuntary disappearances were appointed by the government and these commissions conducted enquiries regarding enforced disappearances in several provinces in Sri Lanka. In their reports they recorded complaints regarding the disappearances of over 20,000 persons. In the Matale area itself there were complaints of hundreds of disappearances and the complainants identified the names of several officers who were responsible for the abductions of large numbers of persons who subsequently disappeared. A particular army camp was also identified as a place which coordinated such abductions which ended in enforced disappearances. The name of the coordinating officer who was in charge of the camp at the time has also been publically identified. The said coordinating officer and several other identified persons are at present holding high posts in the government.

Under these circumstances the move by the government to have the samples of the remains flown to China for the conduct of inquiries into the timing of the deaths of these persons was objected to by the lawyers who appeared for the families of the disappeared persons.

Among other grounds the lawyers stated that the facilities for such inquiries in China were not reliable and also that there were questions about the possible interference into such investigations, thus, creating the doubt about the independence of such inquiries.

However, the magistrate allowed the remains to be sent to a facility in China.

As regards the discovery of bodies of Thiruketiswaram, Mannar, the inquiries are still at a rudimentary stage. The existence of the remains came to the notice of the public when workers constructing a highway came across some of the remains. Thereafter, in the course of excavation the parts of many bodies have been discovered.

The problems associated with both of these mass graves as well as some others found earlier point out the absence of clear legal provisions in dealing with excavations and investigations into the findings taken from such mass graves. There are no guidelines, particularly regarding the early stages of excavations and investigations. The methods adopted at present often rely on untrained manual labourers who use pickaxes and other similar tools and also bulldozers for such excavations. These methods are very much prone to the destruction of the remains that are meant to be discovered and preserved for proper scientific investigations. The very methods of excavation need to be scientific. Both from the point of view of the law and procedures as well as the use of equipment and the persons who use such equipment there is much that is not in keeping with the standards required. However, the government has made no attempt to improve the laws relating to these matters and also to provide for the proper methodologies for these purposes.

The United Nations Working Group on Enforced Disappearances need to look into these two mass graves at Matale and Mannar and also consult the forensic experts and judicial medical officers regarding the problems associated with the conduct of these investigations. Without interventions from the United Nations Human Rights agencies it is unlikely that there will be the proper development of laws and procedures and the allocation of resources enabling proper excavations and investigations relating to mass graves.