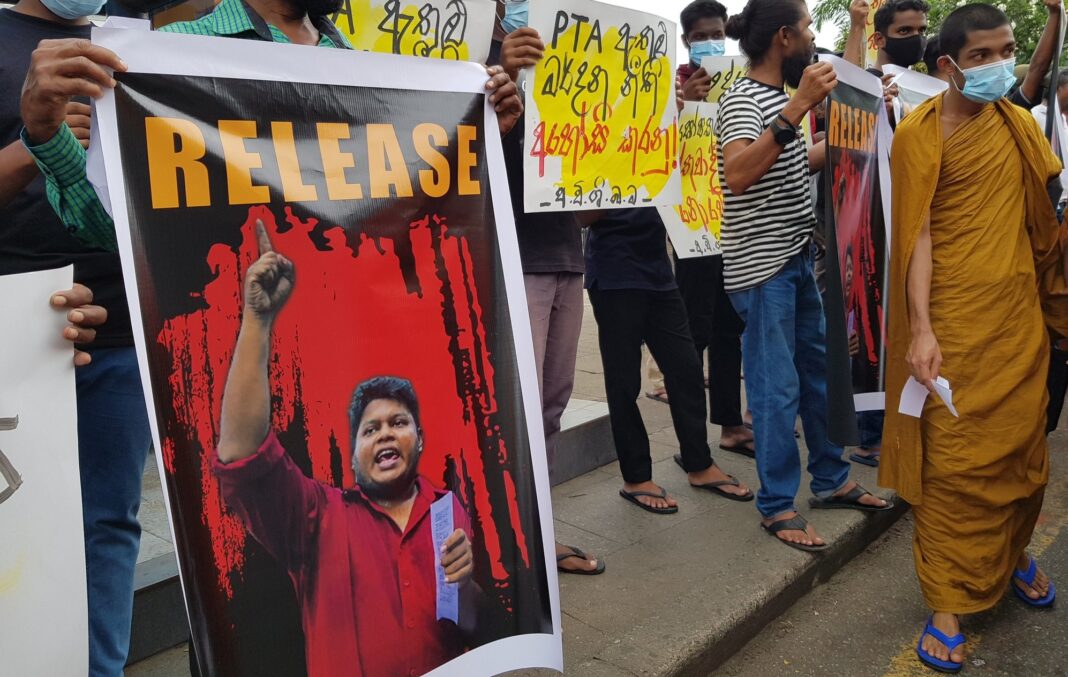 President Ranil Wickremesinghe’s first action in office was to crack down on the people’s struggle that has been taking place almost entirely non-violently across the country since March this year. Of this action, three cases stand out among the many being arrested or called into the Criminal Investigation Department (CID) or Terrorist Investigation Division (TID) for questioning almost weekly. Using the Prevention of Terrorism Act (PTA), Wickremesinghe’s Government has placed three student leaders who were at the forefront of the people’s protests under detention orders (DO) for 90 days.

Over the last month, the families of the three Inter-University Student Federation (IUSF) leaders have experienced grief and have been under surveillance as they wait to know the conditions and whereabouts of their loved ones.

Hashan Jeewantha Gunathileke is a student in the Department of Economics at the University of Kelaniya, where he was active in student organisations. Hashan’s family is from Chilaw, and his father said he went through a lot of hardship to be able to put Hashan through education.

“He was a straight-A student all his life, and studied well on campus,” his father said, adding: “He would do anything for a friend and never had any trouble with the law. He only went to protest about the problems in the country.”

Galwewa Siridhamma Thera is the Convenor of the Inter-University Bhikku Federation (IUBF), an arm of the IUSF that comprises student monks. He is from Hambantota and is a student of Buddhist philosophy at the University of Sri Jayawardenepura.

“I am facing a lot of difficulties and sadness seeing my young son like this,” his mother said.

Wasantha Mudalige is the Convenor of the IUSF. His family is from Mahiyanganaya and he is a student of archaeology in the Department of Humanities at the Rajarata University. Wasantha’s brother said that since he too has been through the local university system, he is aware of the manner in which university students initiate and lead struggles that are about more than just themselves.

“People were dying in queues and hunger. My brother and the student movement came out to speak on behalf of all our lives, for people across the country,” he said.

On his visits to his brother – which have been challenging in themselves – he recalled being told that after the protest, the officers that had arrested Wasantha had stalled at several places to make phone calls.

“Sir, where do we take him?” Wasantha had heard them say, making it clear that orders for his arrest were coming from above.

He recalled an instance last year when Wasantha was arrested, during which Wasantha had related to him a conversation he’d had with Deshabandu Tennakoon, who had threatened Wasantha, saying: “The IUSF is finished. All of you will find it very difficult to continue from now on.”

Tennakoon is the Senior Police Deputy Inspector General in charge of the Western Province. His inaction – and in some cases, action – allowed the attack on Galle Face protestors by pro-Rajapaksa mobs on 9 May.

Initially, all three were held at the Tangalle Detention Centre. However, they are regularly transported between the TID office in Narahenpita and the detention centre in Tangalle. Siridhamma Thera has spent the most time at Tangalle, and so his family has raised concerns about his safety at that particular location. The centre is located within the “old prison”, a dilapidated building that they feel is unsafe for habitation. The centre is also run by the Navy, with officers in uniform and civilian clothing roaming the premises. Wasantha’s brother feels that regardless of who the Commander-in-Chief may be, the Navy is under the control of the Rajapaksas. The Rajapaksa family was sheltered at the Trincomalee Navy base when Mahinda Rajapaksa was forced out of his post in May this year, and one of his sons, too, was an officer within the ranks.

“This is an allegiance that has been built over the years,” he said.

The families of the student leaders recall the visits made to the Tangalle Centre shortly after the three were initially detained there. All those who wanted to enter were body-searched. The food they had painstakingly made at home – favourite dishes that they knew the boys would enjoy – could not be handed over to the students. They were only permitted to purchase food from “outside” and give it to the officers. Wasantha’s brother was perplexed about how the officers determined that a sealed jar of chilli paste purchased from a nearby supermarket was “safer” than the meat curry they’d prepared at home.

With regard to the physical and mental conditions and wellbeing of the detainees, most families said they couldn’t address the topic during their visits, as TID officers would constantly stand around and listen to their conversations. Hashan’s parents said they spoke to their son with four CID officers – some in civilian clothing – present in the room. When his parents asked him how he was, he was only able to smile and say that he was okay.

“The CID has also since visited our village,” Hashan’s father said. They hadn’t actually come to their house but went to houses in the surrounding area to inquire about the family and Hashan.

“We can’t actually have a conversation with him,” Siridhamma Thera’s family said, having experienced similar conditions. They recounted that before they could enter the room in which they were to meet him, the officers would ask them questions such as: “Are you going to ask him about what we asked him?” and they would also listen in on the entire meeting. In addition, his brother, who is also a monk in the IUBF, was called in for questioning to the TID office in Colombo for over five hours, where they mostly asked him about the whereabouts of Siridhamma Thera’s phone.

On one Saturday, Wasantha’s brother had travelled to Tangalle with food cooked at home. He arrived at the prison only to be told that Wasantha had been taken to Colombo. When he asked the officers how this was possible – as he had been issued an appointment to meet his brother in Tangalle – they gave him a phone number to call. After several calls, he was finally informed that he needed to arrive in Colombo before 4 p.m. that day in order to see Wasantha. He rushed to Colombo at 11 a.m., on what was a 3.5-hour journey, in order to be there in time.

“Wasantha asked me to bring him some books,” his brother said, adding: “He asked for paper, wrote a list of books, and gave it to me.”

When he handed over the books to the TID for his brother to read, they accepted all of them except for one book. This was Guru Geethaya, a Sinhala-language translation of Chingiz Aitmatov’s The First Teacher, originally written in Kyrgyz.

The story takes place in a Kyrgyz village and relates the life of a young communist who teaches in the village school, giving a young child a chance for a future through education.

After Wasantha and Hashan were moved to Colombo, their families visited with packages of store-bought food for them – biscuits, juice packs, milk packets – things they knew they liked. For days, those packages were sitting on desks at the TID offices – the officers had not handed them over to the students.

“All these are intentional and are meant to cause us distress,” the families said. The long-drawn-out process of seeking permission or trouble handing items to their family members is intentionally instituted to deter the families from visiting and to isolate the students.

Even visits by lawyers are by appointment, and that too at the discretion of the TID. Based on the visits of a few lawyers, however, we know that the three students are being kept in solitary confinement in dark cells, at their places of detention.

Siridhamma Thera (when in Tangalle) is allowed a short stint outside each day. He does not get to interact with anyone else. Wasantha and Hashan, even though both are held at either Narahenpita or Tangalle, are not allowed to interact with each other.

One crucial issue with the way visitations are arranged is that families are permitted to visit only with the consent of the detainees. The TID officers apparently “ask” the detainees if they want a visit or not before confirming the appointment. In cases where the visits are refused, can there be any certainty that the detainee did not consent? If one of them is tortured, the TID could very easily tell their lawyers or family members that the students did not consent to the visit. The TID could possibly then wait till any injuries or signs of torture are healed before they claim the detainee has consented to a visit again.

The PTA, initially enacted as a temporary measure by then-President J.R. Jayawardene, does not offer the accused the presumption of innocence. Labelling someone a “terrorist” by arresting them under this Act is in itself an act of psychological torture and an overall violation of their rights. Since its enaction, the legislation has been used to repress dissenters and arrest innocent people on baseless suspicions – never in our history, has “terrorism” been prevented through this Act.

It has been used mostly against young Tamil men throughout the war and even after it ended in 2009. Many of them have spent more than five or 10 years in detention under PTA without so much as a charge, let alone a charge and conviction. Currently, nine Tamil prisoners, who were detained under the PTA, are now serving between five and 30 years, whilst one is serving a 200-year sentence. In the aftermath of the Easter Sunday attacks, thousands of Muslims were rounded up on PTA charges, and bail for those found to be not guilty was delayed and dragged on for months. The use of the PTA has been highly racialised – a weapon against minority communities. This indicates that anyone deemed an “enemy of the State” is never far from its claws.

The long-drawn-out cases and the difficulty for families to simply visit incarcerated loved ones are also tactics that have long been used in the instances of PTA detainees. The profile of the person who falls into what the State defines a “terrorist” is the one thing that changes over the years.

“The PTA needs to be repealed, otherwise this will happen to another family again,” Wasantha’s brother said, knowing that year after year, a different group of people are being made out to be “terrorists” based on the requirements of the State and government at the time. So long as terror laws such as the PTA remain on the country’s books, they will always be weaponised by the State to protect its own interests and retain power.

Wasantha’s niece said that her uncle spoke out on behalf of young students like herself.

“He never talked about destroying the country, but rather, about imagining a better future for us all. While the actual criminals are free, he is being demonised and held in detention.”

(The writers are both human rights activists and members of the Liberation Movement, a feminist, Left-wing collective of women fighting against all forms of oppression)

This article was first published in The Morning.