SRI LANKA: The life of a human rights defender is under threat 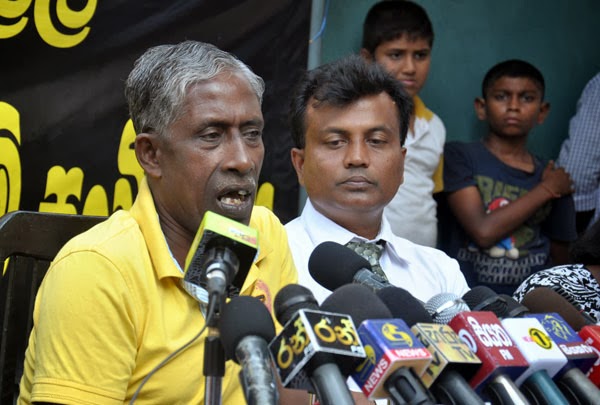 Sunil Samaradeera of No: 34/2, Baseline Mawatha, Borella, a human rights activist based in Wanathamulla, in Colombo District was abducted in broad daylight by persons believed to be connected to the Secretary of Defense. On 13 of February Sunil had met with the Secretary, Mr. Gotabhaya Rajapaksa, regarding issues concerning a housing scheme which threatens to put several households out of their land and according to reports there had been a heated exchange of words. Sunil’s abduction happened shortly after that. Sunil’s neighbours and colleagues staged a protest by blocking a road and as a result two days later he was released. However, he is concerned for his personal security and the authorities have made no effort to investigate the abduction and bring the perpetrators to justice.
This case is yet another illustration of the fact that influential or well connected people can use the Sri Lankan police to their benefit despite the fact that the victims are innocent persons.
CASE NARRATIVE:
The Asian Human Rights Commission (AHRC) has received updated information regarding the abduction of Sunil Samaradeera alias Wanathe Sunil of No: 34/2, Baseline Mawatha, Borella, a human rights activist based in Wanathamulla, in Colombo District. There is grave concern for his safety. Sunil was abducted on 15 of February 2014 close to the temple at Dematagoda by unknown men in a Pajero. His hands were tied; head covered, he was put into the vehicle by force and then his body was covered by a polythene sheet. After a journey of about one and half hours the vehicle stopped at a house. He was taken inside, put on a mat and chained.
After the news of his abduction spread his wife went to the Dematagoda Police Station and made a complaint. Then the residents of his housing scheme came to know of the incident and after some time, they came to the adjoining main road, Baseline Road, where they started a protest by blocking the road and appealed for his release.
They urged the authorities to act immediately to find him and provide him with protection.
Sunil has been the organiser of the ‘Organisation to Protect Houses at Wanathamulla’, 34 Watte, and worked hard against the proposed demolishing and taking over of their housing scheme by the Urban Development Authority which is overseen by the Secretary of Defence.
He earns his living by selling the eatables like hoppers & string hoppers in a small boutique and further he is having a family with five children to maintain. On 13 of February he had met with the Secretary, Mr. Gotabhaya Rajapakse in this particular housing scheme and according to reports there had been a heated exchange of words.
Due to the vehement protest by Sunil’s neighbours he was released two days later. When he was released the adductors threatened him not to tell anyone about what had happened to him. They placed him in a vehicle and released on the road with his wrists still bound. He shouted to attract the attention of a passing motor cyclist who stopped and untied him. The motor cyclist took him some distance towards his place of residence but was reluctant to take him all the way to Wanathamulla. He somehow managed to reach the scene of the protest and made his appearance known and it was only then that the protest ended. His colleagues fear that he will be abducted again and complain that his life is now in danger.
At the time of writing there has not been an inquiry by the police.
Instead the Police Spokesman stated that it is a drama organized by some parties interested to create trouble in the area. Sunil along with several other persons went to the Human Rights Commission of Sri Lanka (HRC) on 5 March to complain that no suspect has been arrested by police regarding the abduction on 15 February. Sunil was able to return to his people only due to the protests carried out by the people at Wanathamulla. However, it is believed that his life is under threat as was stated in the complaint made to the Human Rights Commission.
Sunil appeals for protection for himself and his family members and justice for the abuse of his fundamental rights.
SUGGESTED ACTION:
Please send a letter to the authorities listed below expressing your concern about this case and requesting an immediate investigation into the allegations of abduction of a person by the police perpetrators, and the prosecution of those proven to be responsible under the criminal law of the country for misusing the powers of the state. The officers involved must also be subjected to internal investigations for the breach of the department orders as issued by the police department. Further, please also request the NPC and the IGP to have a special investigation into the malpractices of the police officers for abusing their powers.
Please note that the AHRC is also written a separate letter to the Special Rapporteur on the Situation of Human Rights Defenders in this regard.