The secret to great sex? It’s not what you think …

A defeat is not a victory. A drubbing is not an endorsement. The UNP fared badly at the local government election and the SLFP fared even worse. The JVP didn’t do as well as it hoped; nor did the SLMC or the TNA. The only clear winner of the election was Mahinda Rajapaksa. He failed to exceed the 50% mark – an important point; but a far more critical point is that his newly-formed SLPP replaced the UNP and the SLFP as the largest political entity in Sri Lanka.

A defeat is not a victory but it can be a blessing in disguise. Assuming, the lessons are understood, learned and remembered. Without the humiliating defeat at the local government election, the Sirisena-Wickremesinghe administration would have continued its tone-deaf, arrogant and inept way to a worse disaster in 2020. Worse because from this defeat there’s a way back, but a defeat at a presidential election will be final, irredeemable. Without the drubbing of February 10th, Maithripala Sirisena and Ranil Wickremesinghe would have gone head to head for the presidency in 2020. They would have fragmented the anti-Rajapaksa vote, enabling the victory of Gotabhaya Rajapaksa (who will ‘sacrifice’ his American citizenship at the right time, accompanied by a great deal of fanfare: a procession to the American embassy and back, with frenzied supporters hailing their ‘saviour.’). 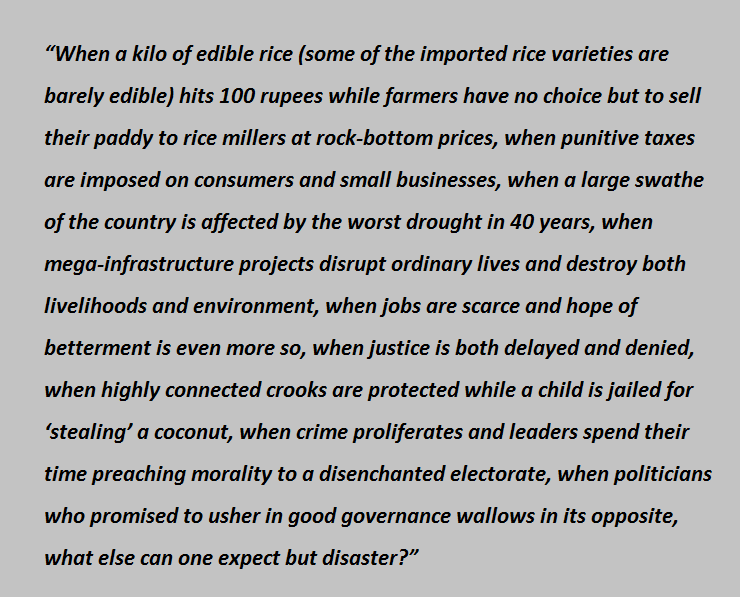 Unfortunately power addles minds and politicians are particularly bad at learning the correct lessons. Some post-election pronouncements by UNP heavyweights are of particular concern. For instance, the country’s first mayoress claimed that the bond scam didn’t harm the UNP electorally. She is free to form her opinion, but to say something so preposterous out loud? Then there was our foreign minister stating that the UNP’s disastrous performance was due to the singing of national anthem in Tamil. Has no one told him about people having to spend hundred rupees on a kilo or rice or a coconut; or about the drought that has destroyed the livelihood of close to 300,000 people? If that is the kind of lesson the UNP learns from this defeat, a Gotabhaya Rajapaksa presidency might well be our fate. History has a history of forgiving some pretty awful crimes, but never stupidity.

For the defeat they suffered, the UNP and the SLFP can only blame themselves. They were warned again and again about the dangers of broken/forgotten promises, and about the resultant proliferation of avoidable problems. When a kilo of edible rice (some of the imported rice varieties are barely edible) hits 100 rupees while farmers have no choice but to sell their paddy to rice millers at rock-bottom prices, when punitive taxes are imposed on consumers and small businesses, when a large swathe of the country is affected by the worst drought in 40 years, when mega-infrastructure projects disrupt ordinary lives and destroy both livelihoods and environment, when jobs are scarce and hope of betterment is even more so, when justice is both delayed and denied, when highly connected crooks are protected while a child is jailed for ‘stealing’ a coconut, when crime proliferates and leaders spend their time preaching morality to a disenchanted electorate, when politicians who promised to usher in good governance wallows in its opposite, what else can one expect but disaster?

The anti-Rajapaksa electoral base is still intact, going by the results of last week’s election. At last week’s election the combined vote of the UNP and the SLFP was higher than the vote of the SLPP. In simple language, more Lankans voted for the current hybrid government than for Mahinda Rajapaksa. 5,093, 915 Lankans voted for the government while Mahinda Rajapaksa received 4,941,952 votes. The UNP and the SLFP together obtained 46.01% of national vote while the SLPP received 44.65%.

Neither the UNP nor the SLFP has a mandate to govern alone. But their mandate to govern together, as a unity, remains. A plethora of broken promises contributed to last week’s electoral disaster. But even with that heavy baggage, the administration would have scraped through had the UNP and the SLFP not turned against each other, often in the manner of spoilt brats. Had the two parties contested together or adopted a strategy of contesting separately and governing together, they would have beaten the SLPP in around 60 local government bodies as well as nationally.

The turnout at 65% was standard for a local government election, but this might have increased had the government performed less disastrously in the last three years. The Rajapaksas energised their base, but the government with its misrule and infantile quarrelling confused, confounded and demoralised its base. Many voted, not out of any enthusiasm, but simply to keep the Rajapaksas out. It didn’t suffice to avert defeat this time; it will suffice even less in 2020, unless the government changes its path.

The lessons of 2018 cannot be understood, unless they are framed by the lessons of 2015. How did Maithripala Sirisena win the presidency? How did the UNP emerge as the largest vote and seat getter in parliament? In January 2015, Maithripala Sirisena or the UNP didn’t defeat Mahinda Rajapaksa singlehandedly. Mahinda Rajapaksa was defeated by the most eclectic and singular alliance in the political history of Sri Lanka, a unity which brought together the UNP, a sliver of the SLFP and the JVP, the main Tamil and Muslim parties and the ultra Sinhala-Buddhist JHU. Mahinda Rajapaksa with his familial rule, his dynastic ambitions and his plan to transform Sri Lanka into a familiocracy enabled that unique coalition. The need to defeat the Rajapaksas and restore democracy was the only common denominator within that unity. The credit for January 8th victory cannot be appropriated by either Mr. Sirisena or the UNP alone. To believe so is to warp facts. And there’s no surer way to electoral disaster than deliberately misrepresenting facts.

In the parliamentary election of August 2015, the UNP emerged as the biggest vote and seat getter again not entirely on its own steam but thanks to President Sirisena’s not so tacit support. By the time the election was called, Mahinda Rajapaksa had become the de facto leader of the UPFA. Mr. Sirisena had proposed a compromise formula – blacklist 20 politicians with particularly noxious reputations and give nomination to Mr. Rajapaksa from his usual Hambantota district. Mr. Rajapaksa rejected the proposal and threatened to contest separately if all his demands were not met. The SLFP hierarchy abandoned Mr. Sirisena and lined up behind Mr. Rajapaksa. At their inaugural rally in Anuradhapura, the leading lights of the UPFA stood in orderly rows, held up their hands and swore a solemn oath to make Candidate Rajapaksa the prime minister. Prof. Nalin de Silva, a key Rajapaksa-ideologue revealed how this goal would be achieved: the UPFA will gain a two-thirds majority, deprive President Sirisena of party leadership and impeach him.i

Faced with a life-and-death situation, Mr. Sirisena fought back. On July 14th he made an unscripted and impassioned speech in the presence of a phalanx of media personnel stating his complete opposition to the Rajapaksas and his determination to prevent the return of the ancien régime. He used the word monarchy (rajanduwa) twice to identify his predecessor’s rule and said, “Mahinda Rajapaksa who was defeated on January 8th will be defeated again.”ii He also pledged not to make Mr. Rajapaksa the prime minister under any circumstances.

A month later, as the election campaign reached its end, Mr. Sirisena sent out a four-page letter to Mr. Rajapaksa. The letter’s real target audience was not Mr. Rajapaksa but ordinary SLFPers. Mr. Sirisena wanted to get his side of the story across to them and persuade as many of them as possible to refrain from voting for the Rajapaksa comeback effort. The clearest possible indication that his effort worked is the electoral outcome in the Polonnaruwa district, Mr. Sirisena’s home-base. The UNP won the district easily, with 50.26% of the vote compared to the UPFA’s 43.63%.

Nationally, the UNP reached 45% mark at the 2015 parliamentary election because those SLFPers who opposed the Rajapaksas heeded Mr. Sirisena’s call and voted for the UNP as the only way to keep the former ruling family out. The UNP emerged as the single largest party thanks to the political backing of Mr. Sirisena and the votes of his supporters. Once again, it was unity that won, and enabled both Mr. Sirisena and Mr. Wickremesinghe to keep their jobs.

Once that unity fractured, both parties suffered. The UNP’s national vote decreased by 13% between August 2015 and February 2018. Mr. Sirisena’s party won 13% of the vote in the local government election. The connection is obvious.

The Rajapaksa factor has created a new political geographic in Sri Lanka. The old divisions have been superseded by a new demarcation along pro and anti Rajapaksa lines. The winning coalition of 2015 happened because political leaders understood this new geographic and responded to it. 2018 has brought disaster to the winners of 2015 because they forgot this reality and acted against it.

Is there a Future?

Ranil Wickremesinghe believed that a split in the SLFP vote between Mr. Sirisena and Mr. Rajapaksa would enable the UNP to romp to victory. He was proven disastrously wrong. The split had already happened in 2015. All that happened in 2018 was that Mr. Sirisena took away his share of the anti-Rajapaksa vote, thereby reducing the UNP to its base vote.

Maithripala Sirisena believed that by attacking the UNP he would be able to carve out a larger share of the SLFP vote for himself. He too was proven disastrously wrong. He had already done that in 2015; the primary identity of those who voted for the UPFA at the parliamentary election was not pro-SLFP but pro-Mahinda. This election demonstrated that they cannot be prised away from him. Trying to do so by pandering to Sinhala chauvinism or social conservatism is a mistake. The only thing to do is to neutralise the power of this bloc by developing strategies to win floating voters and new voters.

A majority of Lankans are still opposed to the Rajapaksas. But Mahinda Rajapaksa is the owner of the single largest voting-block. He can be defeated only if all those who oppose him come to some basic understanding. If the anti-Rajapaksa forces are divided, if they turn on each other, the Rajapaksas will make a comeback. Unity of the UNP and President Sirisena’s SLFP is the first precondition of keeping the Rajapaksas away from power. The government, so long as they stay together, has a mandate to govern. Unity is the first precondition of survival.

The second precondition is remembering the nexus between democracy and economics. There is no such thing as an economy divorced from politics or social conditions. A democracy which ignores the economic needs of the majority of the populace may not remain a democracy for long. Highways, port cities and theme parks (the latest craze of Minister Champika Ranwaka who lost his Maharagama electorate by a massive margin to an independent group backed by the SLPP) do not bring in votes; pandering to Chinese interests won’t win Lankan votes. Those were the mistakes of the Rajapaksas. In the last two years the Sirisena-Wickremesinghe administration busied itself with repeating those mistakes. That is the path not to victory but to disaster.

And the clock is ticking. Elections to six provincial councils are due this year. At least five of those districts (Puttalam, Kurunegala, Anuradhapura, Vavuniya and Mannar) are facing an extreme drought. If the government prioritises popular economic concerns in the coming months and if the UNP and Mr. Sirisena come to some understanding, they will be able to beat the SLPP. If not, both will go down to an even more ignominious defeat.

Statistically, Sirisena-Wickremesinghe administration can claw itself out of the mire it pushed itself into. But that requires maturity and political will. Are Mr. Sirisena and Mr. Wickremesinghe capable to facing the challenge? Or will they continue to squabble, and ram the ship of government and Lankan democracy against the iceberg of Rajapaksa comeback-project?