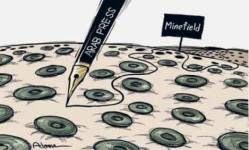 Ranga Jayasuriya
We in Sri Lanka have little to celebrate on the International Press Freedom Day, which falls tomorrow (3). Sri Lanka’s abysmal rankings in media freedom have been documented in a number of international press freedom indices. Sri Lanka ranks 162nd in the Reporters Without Borders’ Press Freedom Index, one slot ahead of Saudi Arabia and one behind Rwanda . The Committee to Protect Journalists (CPJ) in its Impunity Index ranks Sri Lanka as the fourth worst place for journalists.
Nine, of our kind, have been killed during the last 10 years. Many others have been abducted and assaulted and dozens have fled the country for their dear lives.

Scribes in private confide in each other the painful conclusion that the fate of Prageeth Ekneligoda, who has been missing since January 2010, has long been determined.

On the contrary, the government would unleash its guard dogs on anyone who dare to mention those grim details of the climate of impunity. However, facts speak for themselves that the Sri Lankan Government, and some of its key interlocutors are the worst predators of media freedom in the country, and possibly in South Asia.

The government has fostered a culture of impunity and a climate of fear, under which the scribes have been forced to live and work.

Culpability
The government has angrily refused to investigate the culpability of its officials and security apparatus in the killings of media personnel, instead of resorting to slander the victims and their family members, be it Prageeth Ekneligoda, Poddala Jayantha, Lasantha Wickremetunge or Darmalingam Shivaram.
The government’s treatment towards media makes a mockery of its claims as a parliamentary democracy, an idea which is increasingly under strains in the light of the concentration of powers of the State at the hands of the all- powerful President and his siblings.

Sri Lanka is the only parliamentary democracy in the world where the government defeated in Parliament two Private Member Motions to introduce a Right to Information Bill.

Five years since the end of war, Sri Lankan media remains a battered lot, notwithstanding that the incidents of physical attacks, murder and abductions have declined since 2010. Instead of overt repression, the government has adopted a much more covert, yet sinister strategy. It is a strategy of coercion and coaxing of media owners, newspaper editors and journalists. The success of that campaign has been made easier by the fact that Sri Lanka no longer has a mature media tradition. Sri Lankan media did, indeed, flourish during the period from the latter part of the colonial rule to several decades into the independence.

It was during that time the editors stood taller and the newspapers called a spade a spade. Even in the 90s and in the early 2000, barring the State media, the media fraternity acted with dignity, though it always had Brutuses among them, who would jolly well stab their kith and kin in the back.

When Nimala Rajan was killed in Jaffna or Poddala Jayantha and Keith Noyar were abducted and beaten up in Colombo, the media fraternity stood up with the victims, challenged the powers that be in the Ministry of Defence over their culpability.

However, during the subsequent years, amidst war propaganda, the media lost its metal. The euphoria over the military victory – and the formative effect of the slander campaign against media – dampened the public quest for independent news.

Some journos fled the country, some were killed and several others pole vaulted to the government, later becoming its trusted guard dogs. Some editors became sycophants of the regime. Owners entered into pacts with the government behind the curtain.

Editorial independence
There is no clear demarcation between the editorial independence and the ownership control in the media in Sri Lanka. That fluid dynamic made editors increasingly vulnerable for ownership pressure, who themselves have been either coerced or coaxed by the government. Other editors jumped on the bandwagon for pecuniary reasons.

Today, several editors of national newspapers have their offspring educated in foreign universities, at the expense of the President’s Fund. Such luxuries come with strings attached and the readers will see them in print in the lacklustre coverage of rights abuses, corruption and many other government’s ills.
Recently, a number of media institutions, including two English newspapers, which held much promise in the past, were bought over by the government’s acolytes. Those changes in the newspaper ownership have a direct negative impact on the media freedom. On many instances, what the readers and the viewers receive today is the news approved by the government. Due to that, the Sri Lankan public is lesser informed of and more servile to the incumbent regime than they had been 10 years back.

However, both the government and the discerning public should know that a country that keeps its media in the shackles is inferior to its international counterparts in the free world. Such a regime should not expect that the principles of sovereign equality would automatically make it equal to the others, while its media and the citizen are kept in the shackles.

The overwhelmingly suffocating environment, to which the government has condemned its journalists, would serve its short-term considerations. But, in the long run, it would backfire. Not only does it destroy the social fabric of the society – which it has already done – it would also project the government, the architect of that repression, as less human, less democratic, a monster on par with other international pariahs.

As Sri Lanka faces an international inquiry mandated by the UNHRC into allegations of war crimes and a comprehensive report that is to be delivered by the UN Human Rights Chief in March next year, the government cannot afford further strains on its image. Instead, it should try to repair the damage it inflicted on the country’s media.
Ceylon Today