Sri Lanka: The art of mishandling policy; From Aluthgama, to asylum seekers, NGOs, the Govt. wallows in (negative) publicity 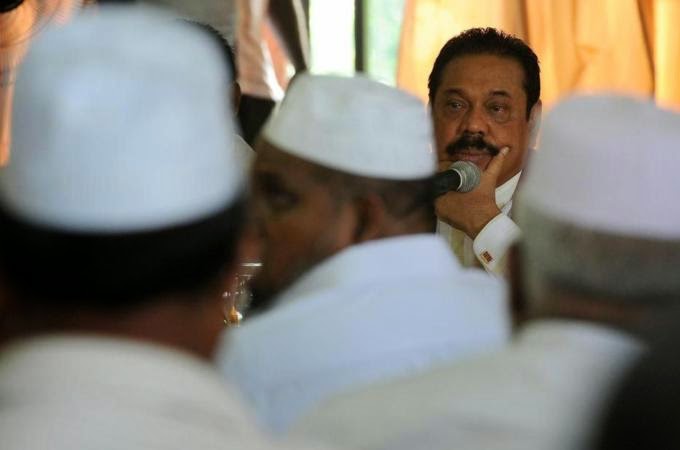 Ranga Jayasuriya
There is something strange in this government. It is wallowing in negative publicity. The sequence of events during the last couple of weeks has given it a steady supply of negative publicity which would prop up its already grim reputation. First, it lets loose a motley group of Sinhala Buddhist ultra nationalist groups such as Bodu Bala Sena, Sinhala Ravaya, Ravana Balaya and so on. Then, the marauding mobs and youth instigated by hate filled sermons, went on rampage in Aluthgama, triggering a sectarian confrontation – the first major clash between the Sinhalese and Muslims since 1915.

To accuse the government of orchestrating violence against Muslims in Aluthgama is naïve, if not self-seeking. However, the government, which had been turning a blind eye to intimidation of religious minorities by the BBS should have seen this coming.

If one bad news is not enough, the government, then, launched a crackdown on the asylum seekers in Colombo. Christians and Ahmeddiyya followers fleeing persecution in Pakistan were rounded up in night raids and herded into two detention facilities in Mirihana and Boossa. All the detainees are asylum seekers registered with the United Nations High Commissioner for Refugees

( UNHCR), which has a bilateral agreement with the government since 2005, under which Colombo agrees to allow the asylum seekers to stay in the country, until the UNHCR processes their asylum applications. In other words, the detentions and threats of deportation of those asylum seekers are a clear breach of the bilateral agreement. And the Controller of Immigration and Emigration Chulananda Perera, who reiterates that the asylum seekers would be deported, has no qualms that it would amount to a violation of bilateral agreement entered with a UN agency on the protection of one of the most vulnerable groups. A government which acts with arbitrariness and disregard towards those very basic principles is unlikely to earn the respect of the international community, no matter how blindly its own electorate would worship the leadership.

Sri Lanka surely suffers a deficit in terms of respect by the civilized democracies in the world. The international reaction towards the incumbent government is not simply rooted in the alleged violations of human rights and humanitarian law during the war against the Tamil Tigers, which itself was an egregious terrorist group. The lion share of the international criticism and Sri Lanka’s vulnerability to such, stem from the failure of the government to rehabilitate itself and rebuild the liberal democratic structures that were dismantled during the three decades of the conflict. Instead of rebuilding, the government dismantled the remnants of the independent institutions and concentrated powers at the hands of an all powerful President. Those powers acquired at the cost of the independent institutions, though strengthened the presidency at home, has weakened him abroad, especially in the eyes of liberal democracies, whose voice matter most and set the tone for many other developing world democracies.

The rational reaction of the government should be to regain the lost respect, by democraticizing itself, safeguarding and promoting fundamental rights of its people, putting in place constitutional protections for vulnerable groups and advocating greater freedoms, both locally and internationally. However, what is unfolding here is the stark opposite. A government which rounds up vulnerable asylum seekers and deports them back to their land of origin, is an act which risks refoulment places itself far away from civilization.

( International law and the principle of non-refoulement prohibit asylum seekers being sent back to their land of origin if they risk persecution upon their return.)

Instead of trying to redeem its name, the tendency appears to shoot the messenger. The government courted controversy, for the third time in the month, early this week when the Defence Ministry affiliated Secretariat for Non-Governmental Organizations issued a directive banning the NGOs from engaging in media related activities, including the issuance of press releases and conducting media workshops. This directive is ludicrous at its best and alarming at its worst. It also betrays the growing insecurity in the government at the media scrutiny and civil society activism. The directive is apparently borrowed from Beijing or Moscow – It is also interesting that China, despite its authoritarian system is allowing greater freedom for NGOs since recently, while Sri Lanka is rolling back on them.)

The latest directive came after pro-government thugs stormed at least two media workshops organized by the local chapter of the anti-corruption watchdog, Transparency International. The disdain of some of the key government interlocutors towards Transparency International and other activist NGOs has been visible long before the recent crackdown. The new initiative could well be aimed at impeding the information flow from Sri Lanka to the UN Human Rights Council panel, which is investigating alleged war crimes in Sri Lanka. It is also aimed at curtailing the last remnant of dissent in the country. However, the latter objective appears to be too costly for a government which has consolidated itself in its domestic front. By cracking down on dissent at home, in order to prop up the image of an already omnipotent government, the government is risking further vulnerability internationally, where it is weakest. However, a pertinent lesson for this government about the recent trend of liberal intervention is that the domestic standing of an authoritarian government has little impact in dictating international opinion regarding intervening in affairs of a country through the use of a multitude of tolls, be it economic, political or military. From Saddam Hussain to Gadafi, a long list of dictators were either loved or loathed by his constituency ( Sadaam’s choreographed elections gave him 99% of popular votes), but they remained pariahs in the eyes of the civilized world and their regimes crumbled when the world’s liberal powers decided to act.

Tragedy
However, the tragedy is that the incumbent government, despite its imperfections, is not a villain as it has been projected, largely due to its mishandling of those salient issues. Its grim international reputation is preventing the limelight being thrown on to its salient achievements in the economy. Its bold and ambitious infrastructure drive is unparalleled in the independent history of Sri Lanka. It has also brought down unemployment and inflation and has transformed the landscape of the former war zone through infrastructure development. (There again, its failure to explore a political solution to the minority grievances is drawing public attention away from its economic performance. That should not however discount the historical intransigence of the Tamil leadership, which is equally responsible for driving the Tamils down the precipice).

Also, within some elements of the government and its subordinate media spin doctors, the penchant to appease to the regressive religious nationalist sentiments is plain. That may be because the lion share of the government ranks were drawn from this particular social and ideological milieu.

Interesting
Even the Head of the State, who despite his obsession with the concentration of powers is hardly an ethno-nationalist fanatic, could become a captive of this dynamic. For instance, it is interesting that, despite his assurance ‘not to let anyone to take the law into his own hand’, the BBS and its ilk are still espousing religious hatred. Also, it is unlikely that he wanted to silence the NGOs, perhaps, his younger brother did.
Also, it is unlikely that he wanted to deport the asylum seekers back to Pakistan and earn international calumny. As the leader of a country which is one of the largest sources for asylum seekers, he is better positioned internationally, if he has a couple of inbound asylum seekers. That would help him challenge the popular narrative. But, someone in his government want those poor people out.

However, in the long run he and the top echelons of his regime are the most vulnerable for the palpable mess, his government is creating, with or without his blessing.
Ceylon Today