SRI LANKA: The appointment and dismissal of judges is the sole privilege of the executive president 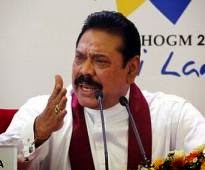 – A Statement from the Asian Human Rights Commission