Sri Lanka: That perennial debate on the executive presidency! 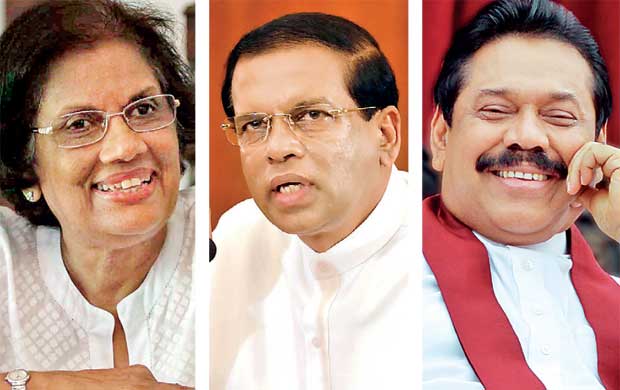 Few institutions in this country are as vilified as the executive presidency. The SLFP has been campaigning to abolish it since the very first day it was introduced under the 1978 Constitution. However, after they were elected to power, SLFP leaders did anything but abolishing the executive presidency. Chandrika Kumaratunga won a landmark election victory in 1994, promising to abolish the executive presidency within 100 days and she completed her two lukewarm terms and retired in 2005. Mahinda Rajapaksa promised the same. At least he ended the war (making use of the extensive powers accorded to him by virtue of the office), but could not satiate himself with two terms. He changed the Constitution to serve himself with a presidency for life. Save J.R. Jayawardene who drafted the 1978 Constitution to be in line with his personal and political ambitions (and later tampered with it habitually). Mahinda Rajapaksa was the only politician who changed the country’s Constitution to fit into his whims and fancies. Even R. Premadasa who was demeaned during his time being a ‘one man show’ never stooped that low.

The only executive president in this country who voluntarily gave up a portion of powers in his office was Maithripala Sirisena. During his administration, the Constitutional Council was reactivated under the 19th Amendment and the power of the president to dissolve Parliament after one year was removed. President Kumaratunga conceded to set up the Constitutional Council under the 17th Amendment, but was forced to do so by the JVP as a precondition for her probationary government with the JVP. Hers does not count as an act of altruism.

Now the SLFP itself seems to be plotting to go back on its word. SLFP ministers at a party meeting have passed a resolution calling for the continuance of the office of the executive presidency and nominating President Maithripala Sirisena as the presidential candidate for the election in 2020. The president’s stoic silence at the meeting was more evocative than words, a political columnist observed. So we are back to the same old hide and seek game. First cronies test the waters, while the president tactfully keeping away, then at the opportune time and numbers are ready, the president springs up his own surprise. That was how Mr. Rajapaksa got his infamous 18th Amendment passed.
For the SLFP, the real problem is internal. The President’s loyalists fear a takeover of the party by the Rajapaksa faction. Sirisena’s executive presidency is the fortress that keeps away the Rajapaksa cohort from launching a concerted attack. If that is brought down, the Sirisena loyalists could well end up being sitting ducks.

Leaders cannot appear to be weak. If they do so, their followers will desert them. The prospect of President Sirisena running for a second term may appeal to his immediate supporters. But there is a flaw in their logic. Mr. Rajapaksa is disqualified from running for another term. His cronies would find he is of no use. Yet, there is no suitable alternative. Perhaps, Gota may give it a shot, but he has skeletons in his closet and may not survive a rigorous political scrutiny. In the absence of a suitable contender, the 50- odd Rajapaksa associated MPs would either have to live in the political wilderness with Mr. Rajapaksa, or jump the ship. Many will choose the latter.

All that sounds like a perfect winning formula for the Sirisena faction. But there is a glitch. What if Gota or someone else chooses to run, not to win, but to deny Sirisena the victory? In a three-man race, provided that the UNP chooses to run, President Sirisena’s chances of winning is limited. Why Mr. Wickremesinghe did not contest in the previous two elections was not because he did not like to be the president, but he knew he could not win. This time, he could foresee a good chance of winning. Mr. Sirisena would be vying for a second term with a blotch on his integrity due to not abolishing the executive presidency, though part of that promise was fulfilled by the 19th Amendment. On the other hand, if President Sirisena can run as the joint candidate of a combined UNP and SLFP, he could sweep the board. But then, what about that promise to abolish the executive presidency?

“The only executive president in this country who voluntarily gave up a portion of powers in his office was Maithripala Sirisena. During his administration, the Constitutional Council was reactivated under the 19th Amendment and the power of the president to dissolve Parliament after one year was removed.”

The executive presidency itself has a very persuasive logic. It gives ethnic minorities a greater ownership in the political process. Though that influence was eroded during the war, mainly due to ethnic polarization, at peace time it would reinforce itself. Mr. Rajapaksa lost because he alienated both the Tamils and Muslims. A Westminster system would not grant an equal leverage to ethnic minorities and especially, given the historical disinterest of the Northern Tamil Parties to be part of the centre, a Westminster system could potentially have the opposite effect.

Second, given the political fragmentation in the South where the electorate is divided almost equally between the two main parties, a Westminster system could well be a recipe for political instability. It is open to question whether the proposed Mixed PR and first past the post voting system would alleviate the level of potential political instability. Sri Lankans like most South Asian tend to view politics and elections as an end by itself. But, they are actually means to an end. No one can be blamed when the people’s will is reflected in a hung parliament, but, political instability would kill economic potentials, drive away investors and reign over poverty.

Countries at our social economic level have immediate priorities, above all, to fast-track economic development, more so since we have under-performed in that area since independence. The executive presidency was meant to address those urgent special needs. However, what J.R. Jayawardene created was an abomination, which had no precedent in anywhere in the world. His arrogance of power made things worse, and by the time he left the office, the country was on fire, both in the North and South. He failed to materialise his only positive policy, economic liberalization, though he might have left an economic opening for his successors.