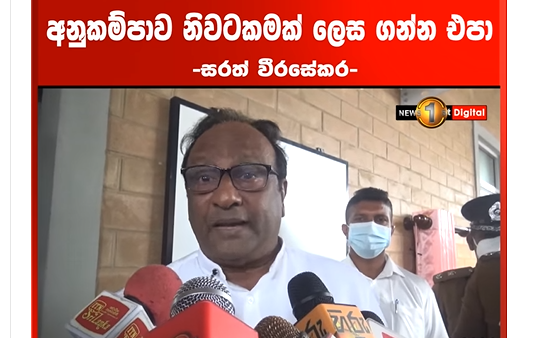 ECONOMYNEXT – A controversial statement attributed to Sri Lanka’s public security minister Sarath Weerasekara has drawn flak from school teachers’ unions who claimed the minister’s words were a clear threat to their right to protest and signalled a keenness for militarisation.

Minister Weerasekara on Thursday (30) said in a televised interview that the authorities had been too soft on teachers who engaged in massive protests in July and August over unresolved salary anomalies and continue to boycott online teaching.

Related: Sri Lanka to reopen 5,000 schools, but teachers on strike refuse to budge

“Do those two who are leading the strike have any feeling about the country? Can you even see that in their faces? To be demanding higher salaries during a pandemic when the economy has fallen to such a low? It’s the innocent teachers that are being misled,” said Weerasekara.

“As public security minister, I have said at the cabinet meeting too that we mustn’t be soft [on these protests]. We have to take tough measures,” he added.

Responding to Weerasekara’s comments, Ceylon Teachers’ Union (CTU) General Secretary Joseph Stalin sought a clarification from the government on the cabinet’s position on the minister’s pronouncement.

Stalin was among scores of protestors who were arrested and sent off to quarantine camps at the start of a devastating wave of the COVID-19 epidemic.

“We wish to know what these tough decisions and actions are. He is making these statements when there is an European Union (EU) delegation in the country,” Stalin told reporters on Friday (01).

A five-member EU delegation arrived in Sri Lanka this week to review the Generalised Scheme of Preferences Plus (GSP+) trade concession. The EU parliament passed a resolution in June calling on the EU commission to withdraw Sri Lanka’s access to the over 500 million US dollar trade concession in an effort to persuade the country to repeal its controversial anti-terror law.

Opposition Tamil National Alliance (TNA) MP M A Sumanthiran has warned that Sri Lanka is likely to lose GSP+ by April 2022 if the government does not take drastic steps to address human rights concerns.

“If Sri Lanka loses GSP, you must take responsibility for tens of thousands of jobs that may be lost. If you cannot comprehend the gravity of it, resign immediately,” Pahiyangala Ananda Sagara Thero of the Surakimu Sri Lanka organisation said.

Chairman of the Education Professionals Association Ulapane Sumangala Thero demanded to know why the authorities weren’t quite so tough on those accused of large scale corruption.

“Isn’t this a militarisation of the country that is being unofficially proposed?

“We will not surrender to Minister Weerasekara’s foolish theatrics,” the monk told reporters on Friday.

Nalin Hewage of the Janatha Vimukthi Peramuna (JVP) said the minister must take responsibility for any future attack against peaceful protests in Sri Lanka.

“This is an indirect threat. We ask the minister to take tough decisions when prison ministers threaten prisoners at gunpoint,” he said, referring to the recent controversy surrounding an incident at the Anuradhapura prison.  (Colombo/Oct01/201)