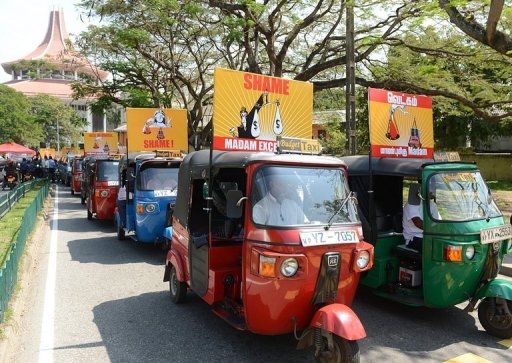 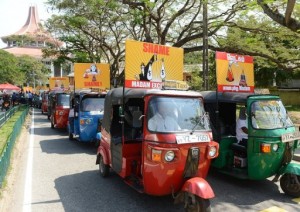 Hundreds of government-supporting rickshaw drivers choked the capital demanding the sacking of Sri Lanka’s chief justice on Friday as the supreme court debated the legality of moves to impeach her.
Chief Justice Shirani Bandaranayake has been accused by the ruling United People’s Freedom Alliance party of financial and professional misconduct in a case which has raised fears that the government is trying to control the courts.

The demonstration, organised by the pro-government Three-Wheel Taxi Drivers’ association, was the biggest public display of opposition to Bandaranayake, 54, the first woman in the country to hold the office.

The ubiquitous three-wheel taxis gathered en masse at the Town Council square in Colombo and drove past the Superior Courts Complex causing more traffic jams along the narrow streets of the congested capital.

“We have about 700 of our members taking part at the start of this protest,” said M. A. Sarath Wimala as he drove his green-coloured Bajaj autorickshaw towards the courts complex.

“This is not a rent-a-crowd, we are genuinely interested in the independence of the judiciary,” he said, adding that he did not believe that the chief justice was independent.

The protest came a day after Sri Lanka’s parliament headed for a showdown with the judiciary over the ruling party’s plans to impeach Bandaranayake whose recent judgements had gone against the government’s legislative agenda.

“This (impeachment) is a matter which falls exclusively within the purview of parliament’s authority,” Parliamentary Speaker Chamal Rajapakse, who is also President Mahinda Rajapakse’s eldest brother, announced on Thursday evening.

Rights groups have seen the impeachment as an attempt by President Rajapakse to tighten his grip on power after crushing Tamil rebels in 2009.

The Supreme Court had on Wednesday issued a notice to MPs to appear in court on Friday and explain their actions after the influential Bar Association of Sri Lanka filed a case calling for the process to be declared illegal.

The court on Friday issued fresh notices to the Speaker and members of the parliamentary panel probing the chief justice to attend a hearing on December 13, a court official told reporters.

Speaker Rajapakse had said on Thursday that MPs would not go before the Supreme Court and insisted no one else had the power to interfere with the work of the 225-member parliament.

The country’s apex court, which has the sole power to interpret the constitution, annoyed the president last month with a decision to effectively scupper a bill giving more powers to the economic development minister, who is the president’s youngest brother Basil.

The parliament last week also ignored a Supreme Court “request” to suspend the impeachment hearing pending a final verdict on the legality of the legislature’s move to try the top judge.

Last week Bandaranayake told the parliamentary committee that there was not an “iota” of truth in the allegations against her and vowed to defend herself against the charges.

The government has separately brought corruption allegations against her husband who headed a state-run bank before he was forced to resign earlier this year after a controversial deal to purchase shares in a loss-making company.