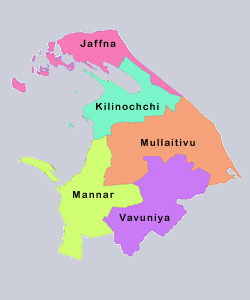 May 25, Colombo: Sri Lanka’s major Tamil political party, the Tamil National Alliance (TNA) has insisted on complete power devolution to the provinces through the 13th Amendment to the Constitution since problems over the provincial councils are due to the incomplete devolution of power by successive governments.

TNA parliamentarian Suresh Premachandran said yesterday that the respective governments had appointed committees that have made various proposals but the problems over the provincial councils in the country have not been resolved through the years.

Premachandran said the TNA expects nothing less than complete devolution of financial, police and land powers to the provinces through the 13th Amendment to the Constitution.
Successive governments had come up with various proposals from time to time since the police and land powers have been devolved partly.

According to Premachandran, late President Ranasinghe Premadasa had appointed the Mangala Munasinghe Commission, and former President Chandrika Kumaratunga came up with another solution. The present government appointed the All Party Representative Committee (APRC), he noted.

Premachandran said that the governing party needed to resolve its stance on the devolution of power among its coalition partners since they are expressing differing views.

The Jathika Hela Urumaya (JHU), a coalition party of the ruling United People’s Freedom Alliance (UPFA), said it will take measures to mobilize the public to urge the government to abolish the 13th Amendment to the Constitution which devolve powers to the provinces.

The JHU is vehemently against the land and police powers given to the provinces under the 13th Amendment and calls for amending the Constitution to take away those powers from the provinces before holding the elections to the Northern Provincial Council scheduled for September.

Their call is supported by Sri Lanka’s Defence Secretary Gotabhaya Rajapaksa, who says that he would never agree to granting police powers to provincial councils according to the 13th Amendment.
The Defence Secretary is of the view that granting police powers to provincial councils in future could pose a serious threat to national security and lead to a dangerous situation.

However, the Tamil MP said complete powers including land and police powers need to be devolved to the provinces for a sustainable solution.
CC