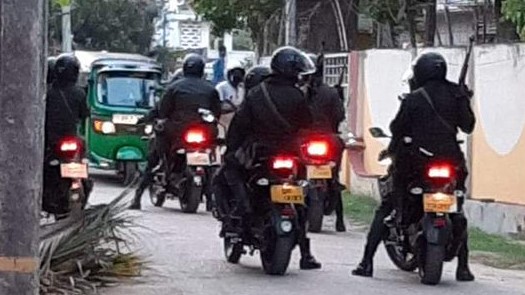 In a series of tweets Tamil National People’s Front has reported continuing police harassment by the police against people, party members, and lawyers who appeared on behalf of the TNPF to argue against the quarantining of 11 party leaders and organizers by the police.

On Monday, at around 7 pm, 8 farmers walking on the street in Chempiyanpattu, Vadamaraachchi were beaten with wires and poles by Navy personnel and men dressed in civvies. pic.twitter.com/8qBfnR8xzU

Three Tamil men travelling in a three wheeler in Urumpirai last night were stopped by the Army for not wearing masks properly. After allowing them to proceed Army personnel chased them down, stopped them and beat the men.

They were handed over to Koppay police with the Army alleging the men attacked Army personnel. The 3 men were arrested and produced in court for obstructing duties of the Army. They were ordered by Jaffna Magistrates Court to be remanded till Tuesday.

The gates, motorcycle, and doors were slashed with swords by unknown men who entered the premises on Friday night. A junior lawyer related to the case was also threatened by Army in Jaffna town this week. Around 20 Tamil lawyers appeared on behalf of the party in this case.

House of Roy Dilaksan—lawyer who appeared on behalf of the TNPF to argue against the qurantining of 11 party leaders and organizers of #May18—was attacked by unknown persons. Another lawyer was threatened recently. pic.twitter.com/Z3SFV6HVI6