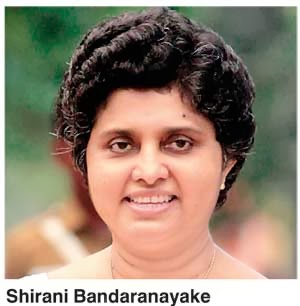 ◾5-Judge bench overturns Appeals Court writ against PSC findings in Shirani B impeachment
◾SC says Court of Appeal has no writ jurisdiction over Parliament
◾Overturns former Supreme Court ruling that PSC had no basis in law
◾Ruling does not validate impeachment: Weliamuna
The Government got one step closer to legalising the sacking of Chief Justice 43 Shirani Bandaranayake when the Supreme Court yesterday overturned a Court of Appeal writ that quashed the findings of a Parliamentary Select Committee (PSC) that probed impeachment charges brought against her.
A five-Judge divisional bench of the Supreme Court ruled that while the Court of Appeal had exclusive jurisdiction over issuing writs, that jurisdiction did not extend to matters of Parliament and its select Committees. The bench ruled that under Article 140 the Court of Appeal had writ jurisdiction over inferior courts but argued that under the provisions of the Sri Lankan Constitution, the Parliament and its select committees could not be regarded as inferior to the Court of Appeal.
The Supreme Court held that Parliament and its select committees would therefore not be amenable to writ jurisdiction.
The verdict was issued yesterday after considering a petition filed by the Attorney General’s Department against the Court of Appeal Writ Certiorari of 7 January 2013, four days before Parliament removed Chief Justice Bandaranayake from office.
The Court of Appeal writ quashed the PSC report on Bandaranayake’s impeachment ‘trial’ that found her guilty on three counts and barred Parliament from further action to remove the Chief Justice based on the flawed findings. The writ was issued the basis that the Supreme Court had just days before declared the impeachment process to be unconstitutional and legally unsound.
The petition against the Court of Appeal Writ was heard before Justices Saleeem Marsoof PC, Chandra Ekanayake, Sathya Hettige, Eva Wanasundara and Rohini Marasinghe.
Reacting to the Supreme Court ruling, senior constitutional lawyer and legal activist J.C. Weliamuna told the Daily FT that the judgment in no way validates Bandaranayake’s impeachment.
“At the time of impeachment what were valid were the rulings by the Court of Appeal and the Supreme Court. If the Government respected the Judiciary, it should have waited until the judgments were reviewed. They ignored everything and continued with their arbitrary actions to remove the Chief Justice. They can’t seek subsequent judgments to validate those actions now. What is material is the time of impeachment,” Weliamuna said.
In its 32-page judgment the divisional bench also overruled the Supreme Court order Ref. 3/2012 which held that only a court, tribunal or body that has power conferred upon it by law has the authority to make findings that affect the rights of a person. In its 1 January judgment a three-Judge bench of the Supreme Court ruled that a Select Committee appointed under and in terms of Standing Order 78A has no legal power or authority to make a finding adversely affecting the legal rights of a Judge.
However, the five-Judge bench led by Justice Marsoof argued that the previous bench had deleted or ignored the words “or Standing Order” set out in Article 107 (3) which provides that Parliament shall “by law or standing order” provide for all matters relating the investigation and proof of a judge’s misbehaviour or incapacity.
“It is my considered opinion that the determination of this Court in SC Reference No. 3/2012 manifestly exceeded the mandate conferred on this Court by Article 125(1) of the Constitution to interpret the Constitution, and was made in disregard of the clear language of Article 107(3) and other basic provisions of the Constitution. The determination is a blatant distortion of the law, and is altogether erroneous, and must not be allowed to stand. This Court hereby overrules the said determination of this Court in SC Reference No. 3/2012,” Justice Marsoof wrote in his determination.
Palitha Fernando, PC, Attorney General with Shavindra Fernando, Deputy Solicitor General, and others appeared for the petitioner appellant. Attorneys M.A. Sumanthiran with Viran Corea and Niran Ankatell appeared for 11th Respondent TNA Leader R. Sampanthan and Attorneys J.C. Weliamuna with Sunil Watagala, Pulasthi Hewamanne and Mevan Bandara represented the 12th respondent, JVP MP Vijitha Herath.