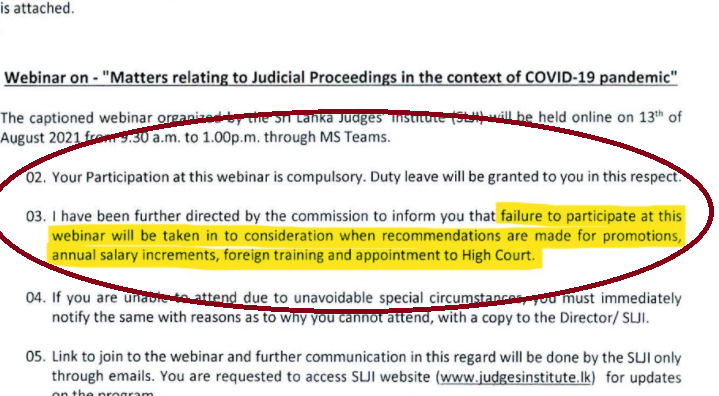 Image: An indirect warning to non-participating judges in the invitation to the JSC seminar.

Judicial Officers and lawyers have expressed dismay over a recently held Judicial Service Commission (JSC) meeting which is believed to have insisted on the Magistrates to use Sections 98 and 106 of the Criminal Procedure Code to control protesters and public gatherings, taking into account the country’s pandemic situation.

A senior Magistrate who wishes to remain anonymous told Daily Mirror that for the first time in his judicial career he attended a JSC meeting resulting in an impression that the Magistrates should follow those instructions contrary to applying their judicial mind. He insisted that this can be considered as a subtle pressure on Magistrates when engaged in the performance of their official duties.

The meeting titled “Matters relating to judicial proceedings in the context of the COVID-19 pandemic” was held last Friday (13) with the participation of Chief Justice Jayantha Jayasuriya, two members of the JSC Supreme Court Justices Buwaneka Aluvihare and L.T.B. Dehideniya and another Supreme Court Judge Mahinda Samayawardena.

The sources said that before the meeting the participants believed that the meeting would be arranged to discuss the Covid-19 situation in courts where judges, lawyers and court staff have been infected and the safety precautions needed to be taken.

“When the meeting started it was clear that the focus was not on keeping the courts safe but to instruct the judges on the effects of large crowds having on the spread of Covid-19 and to impress upon them to give orders the police requests to curb the protests,” the sources further added.

Meanwhile, a judicial officer who attended the meeting said when they were briefed by Health Officials including Director General of Health Services Dr Asela Gunawardena, they did not bring a scientifically proven analysis to explain there is a threat of rapid spreading of Covid-19 through public meetings and protests.

Justice Samayawardena had also presented a presentation on Public Nuisance followed by a panel discussion with the participation of all the JSC members. The JSC Secretary Sanjeewa Somaratne was also present at the meeting.