Sri Lanka suicide rate one of the world’s highest 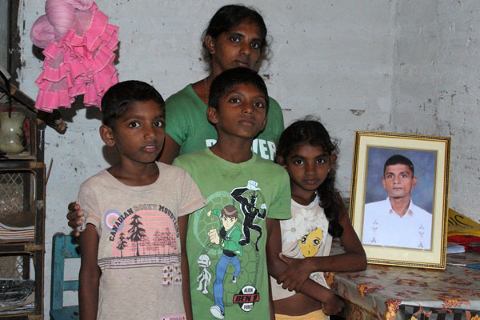 Sujeewa Amaranath
New official data shows that Sri Lanka still has one of highest suicide rates in the world, with almost 4,000 people killing themselves per year, or about 11 per day. Dr. Neil Fernando, who heads the country’s National Institute of Mental Health Promotion, released the figures in a Suicide Prevention Day seminar on September 10. The majority of victims, he reported, were aged 15 to 44.
President Mahinda Rajapakse claims that the island nation is “the emerging wonder of Asia.” But poverty, joblessness, high debt burdens and other social problems—the main factors behind the high suicide rate—are rampant throughout the country.

The stark reality facing thousands of ordinary Sri Lankans was highlighted by the tragic suicide of 35-year-old Milton Rupes Nonis in Kalaeliya, about 20 kilometres north of Colombo. Nonis, a father of three school-age children, faced unbearable poverty, unemployment and debt. He hanged himself on September 1.
Niroshini Amarsinghe and her three children with photo of Milton Rupes Nonis

Niroshini Amarasinghe, Nonis’s grief stricken 30-year-old wife, told WSWS reporters that her husband was a carpenter but had been “unable to get regular carpentry work and was compelled to do odd jobs to earn living for the family.”

Nonis had secured some work “clearing private lands,” she said, but had in recent months “become addicted to alcohol” because of the problems he faced. “We had just started the journey of life. We never thought that he would commit suicide.”

Amarasinghe explained that her husband had been worried about his inability to buy school books for their children, aged 8, 10 and 12. “We had taken out a 50,000-rupee (about $US385) bank loan,” she said.

“I’m working at a coir [coconut fibre] mill and only earn some 10,000 rupees for the whole month. It’s badly inadequate for our necessities. Relatives also help us, but life is now more difficult because I have to bear the whole burden. We have to feed ourselves as well as maintain children’s education with the small amount I earn.”

Amarasinghe said her only hope was to provide her children with a decent education. “But I’m worried whether I can do it in this situation,” she added.

Residents of the densely populated Kalaeliya and surrounding areas depend on casual jobs to survive. Abject poverty, unemployment and lack of proper education prevail. Many residents fish in a nearby polluted canal. Some youth secure low-paid work at garment factories. The area is prone to flooding, even after light rain.

Nonis had begun to build a small house to replace their rundown home, Amarasinghe explained.

“We started to build it using 150,000 rupees that we won in a lottery but since his death, I wonder how I’m going to complete it. I’ve no other income and am struggling to meet daily needs with the pittance I receive from the coir factory,” she said.

While the Rajapakse government says the poverty rate fell to 8.9 percent in 2011, this is based on the extremely low official poverty line—as of August, it was just 3,569 rupees per month per individual, or 118 rupees (90 US cents) a day. Likewise, the official unemployment rate is 3.5 percent but excludes those employed in short-term, unstable casual jobs, often working for a few hours.

Dr. Fernando said the “risk factors for suicide” were mental and physical illness, alcohol and other substance abuse, chronic illness, acute emotional distress, violence and sudden and major changes in peoples’ lives, such as job losses or separation of a partner. He claimed that the suicide rate could be reduced by improving the life skills and cultural outlook of children through improved education, but the “risk factors” represent the harsh social and economic conditions that confront millions of ordinary Sri Lankans.

Poverty, social inequality and homelessness have worsened dramatically as a result of the three-decade communal war against the Tamil minority, which ended in May 2009, and years of pro-market economic reforms pursued by successive governments.

According to a recent police report, 3,770 people committed suicide, including 231 women, in 2011. Most were in rural peasant areas and were mainly due to poverty and debt. This impoverishment has been intensified by government cuts to farm subsidies, rising production costs and low prices for agricultural goods.

Rajapakse’s government is attempting to cover up the real picture. Progressive Farmers Federation leader Kaudulle Jayatissa told the WSWS that state village officers were being directed by the government not to issue death certificates detailing the reason for a suicide, including factors such as indebtedness.