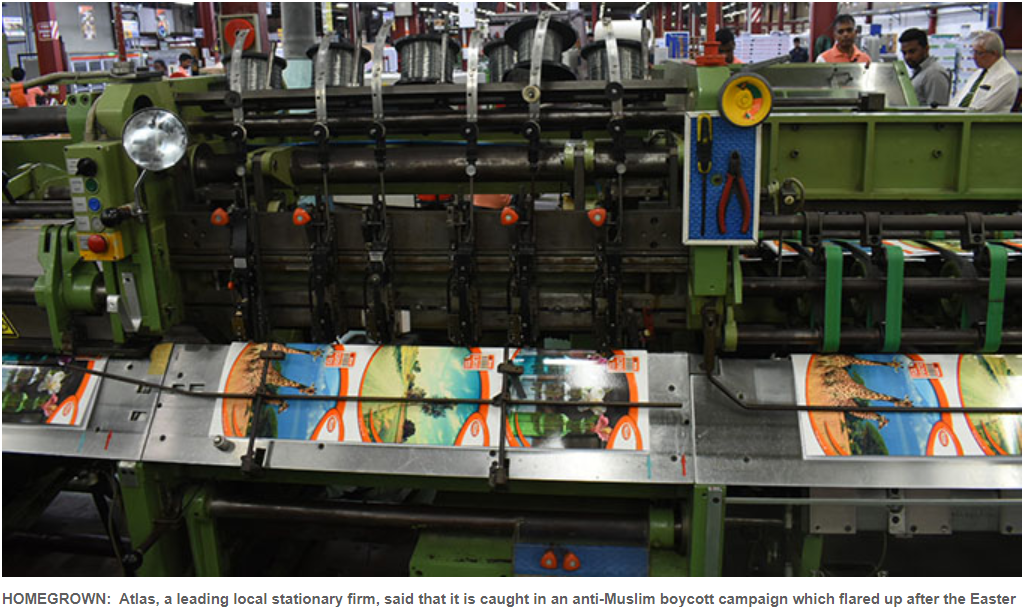 Image: Atlas, a leading local stationary firm, said that it is caught in an anti-Muslim boycott campaign which flared up after the Easter Sunday attack.

ECONOMYNEXT- Students in Sri Lanka’s education system are being ridiculed and are facing ‘punishment’ for using stationary produced by a firm caught in an anti-Muslim boycott, an official said.

Atlas Axillia, a top stationary and publishing company has been targeted by anti-Muslim activists following suicide attacks by an extremist Islamist group, some of whose members had apparently been in the pay of a state agency, in April.

“Some students are being ridiculed and some are being punished for carrying Atlas products to school,” Managing Director Asitha Samaraweera told reporters on Wednesday.

“This hatred is being inculcated in our children’s minds. Young minds are being corrupted.”

Some students have been told they will not be admitted inside the class the following day if they continued to bring Atlas products.

The Judenboycott style attacks of the style seen in Nazi-Germany have hit several Muslim-owned businesses in Sri Lanka.

At least one food factory and many shops were also burnt down in a Krystallnacht-style mob violence, many days after the attacks, with nationalists using social media to spread hatred and resentment.

The Hemas Group, controlled by Sri Lanka’s Esufally family, acquired Atlas in 2018, which claims a 50 percent market share in the stationary product categories it manufactures.

The Madanayake family, which currently holds a minority stake in Atlas, founded the firm in 1959.

Samaraweera said that he is ‘disappointed’ about racism being spread through the education system.

“There is a lot of anger present after the bombings, and those with vested interests are channeling this anger along racial lines,” he said.

Social media was widely used in Sri Lanka in anti-Muslim activism, with fake accounts set up by interest parties to rile up people. Business rivalry also plays a part.

Several complaints have been lodged at the Criminal Investigation Department against competitors and groups with vested interests who had helped spread a defamatory boycott campaign against Atlas products, Samaraweera said.

Civil litigation is also being filed against them he said.

In total, those with vested interests had made 148 comments and posts on the social media platform Facebook within a week starting April 28, he said. However, over 400 posts during the week were from fake accounts, which are hard to track down, Samaraweera said.

“Even in the last 30 days, there have been 65 posts reaching 1.2 million people, 41 percent of which are from fake accounts,” she said.

Facebook is removing most of the posts as they violate the social media platform’s community guidelines, Masakorala said.

However malicious stories being spread through messaging apps like WhatsApp unopposed, Samaraweera said.

He said that the firm will undertake an awareness campaign targeting teachers and community leaders to debunk malicious stories being spread about Atlas.

“We were unjustly accused and the defamation levelled against us to misguide the public is particularly shocking.”